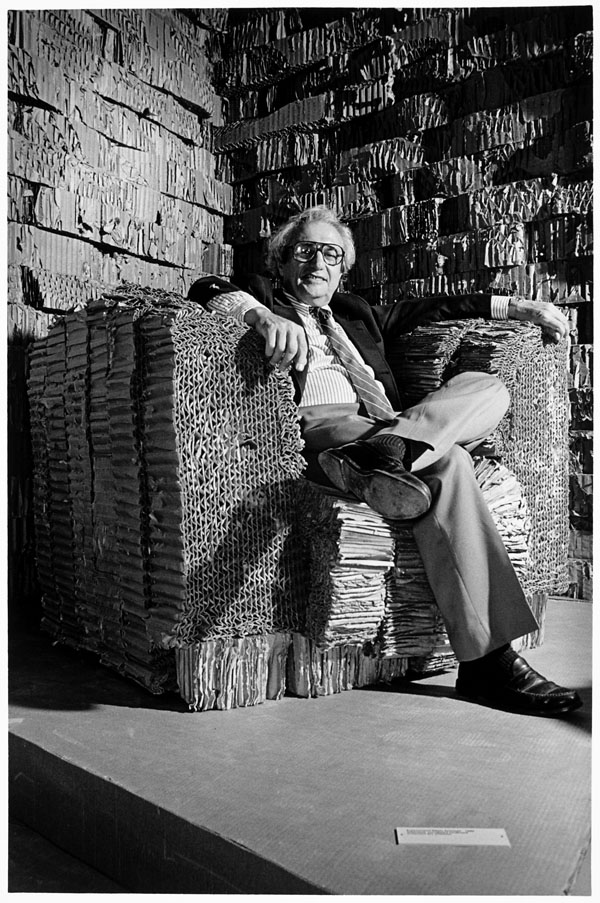 His buildings, including his private residence, have become s. Many s, companies, and seek Gehry's services as a badge of distinction, beyond the product he delivers.

His best-known works include the titanium-covered Guggenheim Museum in , Spain, in downtown Los Angeles, in , in , in , Czech Republic, and his private residence in , , which jump-started his career, lifting it from the status of "paper architecture," a phenomenon that many famous architects have experienced in their formative decades through experimentation almost exclusively on paper before receiving their first major commission in later years.

In 1947 Gehry moved to , got a job driving a delivery truck, and studied at , eventually to graduate from the 's School of Architecture.

After graduation from USC in 1954, he spent time away from the field of architecture in numerous other jobs, including service in the . He studied at the for a year, leaving before completing the program.

Still known as Frank Goldberg, he married Anita Snyder, who he claims was the one who told him to change his name, which he did, to Frank Gehry. Having divorced Snyder in the mid-1960s, he married Berta, his current wife, in the mid-1970s. He has two daughters from his first marriage, and two sons from his second marriage.

Having grown up in Canada, Gehry is a huge fan of hockey. He began a hockey league in his office, though he no longer plays with them. In 2004, he designed the trophy for the .

He saw the and allowed Wexler to give comments to the press about him. (Wexler died in 2007.)

Gehry holds dual citizenship in the United States and Canada. He lives in Santa Monica, California, and continues to practice out of Los Angeles.

The warped forms of Frank Gehry's structures are classified sometimes as being of the , or "DeCon" school of architecture, whether or not he consciously holds such inclinations. Gehry himself disavows any association with the movement and claims no formal alliance to any particular architectural movement.

The DeCon movement stems from a series of discussions between French philosopher and architect in which they question the utility of commonly-accepted notions of structure alone in being able to define and communicate a meaning or truth about a creator's intended definition (a definition of space in architecture, for example), and counterposes our preconceived notions of structure with its undoing; the deconstruction of that very same preconception of space and structure. It is in this criticism or deconstruction of a given construct, in this case, a structure, that architecture finds its justification or its "place of presence."

In that sense, DeCon is often referred to as in nature for its ability to go beyond current modalities of structural definition. In architecture, its application tends to depart from in its inherent criticism of culturally inherited givens such as societal goals and functional necessity. Because of this, unlike early modernist structures, DeCon structures are not required to reflect specific social or universal ideas, such as speed or universality of form, and they do not reflect a belief that . Gehry's own Santa Monica residence is a commonly cited example of deconstructivist architecture, as it was so drastically divorced from its original context, and, in such a manner, as to subvert its original spatial intention.

Gehry is sometimes associated with what is known as the "Los Angeles School," or the "Santa Monica School" of architecture. Theappropriateness of this designation and the existence of such a school, however, remains controversial due to the lack of a unifyingphilosophy or theory. This designation stems from the Los Angeles area's producing a group of the mostinfluential postmodern architects, including such notable Gehry contemporaries as and Pritzker Prize-winner
of Morphosis, as well as the famous schools of architecture at the (co-founded by Thom Mayne), , and the USC.

Gehry's work has its detractors. Among the criticisms: [ [http://www.berkshirefinearts.com/?page=article&article_id=458&catID=26 Berkshire Fine Arts - MIT Sues Architect Frank Gehry Over Flaws at Stata Center ] ] [ [http://sympathetic-compass.blogspot.com/2008/05/frank-gehrys-new-miss-brooklyn-b1.html Frank Gehry's new Miss Brooklyn - B1] ]
* The buildings waste structural resources by creating functionless forms
* The buildings are apparently designed without researching the local climate
* The spectacle of a building often overwhelms its intended use (especially in the case of museums and arenas)
* The buildings do not seem to belong in their surroundings "organically"
Seattle's EMP Museum represents an example of this phenomenon. 's chose Gehry as the architect of the to house his public collection of artifacts. While the result is undeniably unique, critical reaction came in the form of withering attacks. The bizarre color choices, the total disregard for architectural harmony with built and natural surroundings, and the mammoth scale led to accusations that Gehry had simply "got it wrong." Admirers of the building remind critics that similar attacks were leveled against the in the late 19th century, and that only historical perspective would allow a fair evaluation of the building's merits. However, practical criticisms have continued.

Gehry's works have also raised concerns about possible environmental hazards. According to the "", Disney Hall in downtown Los Angeles has "roasted the sidewalk to" convert|140|°F|°C "enough to melt plastic and cause serious sunburn to people standing on the street." Later computer modeling of the structure revealed that several surfaces were acting as parabolic mirrors, concentrating sunlight and heat into small areas on the pavement. The city paid for the offending panels to be sanded in order to reduce the glare. Gehry, commenting on the incident at a fundraiser, remarked:

According to , Case Western Reserve University "takes precautions with Gehry's sloping roof" on its Weatherhead School of Management building:

Gehry's projects have also been criticized for ballooning budgets. The Gehry-designed building for Weatherhead School of Management at was originally planned to cost $25 million, then was raised to $40 million after Gehry was hired. The cost of the building eventually went up to more than $60 million. Kim Cameron, a former dean of the business school, quoted in an article in "", said the complexity of the project led to rising construction costs. "Everyone expected people to line up to build a Frank Gehry building," Mr. Cameron said. "Instead, we got comments like the one we got from a steel contractor, who said, 'Look, we can build a bunch of square boxes and earn the same $20-million that it will cost to build your building. But we can do those in six months, and it will take two years to do your building.'" [cite news | author=Carlson, Scott | title="Dazzling Designs, at a Price" | url=http://chronicle.com/free/v47/i20/20a02901.htm | publisher="The Chronicle of Higher Education" | date=2001-01-26 | accessdate=2007-11-26]

Recent criticism of Gehry suggests he is repeating himself. Critics claim the use of disjointed metal panoply (often titanium) that has become Gehry's trademark is overused, and that almost all of his recent work seems derivative of his landmark Bilbao Guggenheim. Defenders respond that these criticisms ignore the subtleties that have emerged as his style has progressed. Although many of his buildings have maintained the vocabulary of rolling metallic forms, they argue, specific forms have never been repeated, and that within this motif is incredible variety and innovation. Some say Gehry would find it difficult not to rehash Bilbao or Disney even if he wanted not to, because his "signature style" is so widely recognized that potential clients approach him expecting it. Gehry's defenders respond that this ignores the unprecedented amount of power Gehry holds in negotiations with clients, and the artistic integrity he must possess in order to achieve what he has. They argue that the similarities in his latest masterpieces are more akin to an artist fleshing out the frontier of a stylistic universe than a hack stamping out product for demanding clients.

Another criticism extends from the notion that Gehry's buildings ignore good practice by turning their back on pedestrians (citing stark, limestone streetwalls of Disney Hall), and do not adequately respond to their physical context. It is interesting to note that Gehry is currently developing the urban design for a neighborhood in , under the working title . Given the criticism he has faced regarding his lack of consideration for good urban design, it remains to be seen how he will approach this design, and how it will interact with the Disney Hall.

In academia, one of Gehry's most consistent critics is Hal Foster, an who has taught art and at and .Foster feels that much of Gehry's acclaim has been the result of attention and spectacle surrounding the buildings, rather than from an objective view.Fact|date=September 2007

Other notable aspects of career

Gehry is a of Architecture at and also teaches at .

Gehry has gained a reputation for taking the budgets of his clients seriously. Complex and innovative designs like Gehry's typically go over budget. , which has been compared with the Guggenheim Museum Bilbao in terms of architectural innovation, had a of 1,400 percent. It was therefore duly noted when the Guggenheim Bilbao was constructed on time and budget. In an interview in Harvard Design Magazine [Bent Flyvbjerg [http://flyvbjerg.plan.aau.dk/HARVARDDESIGN63PRINT.pdf Design by Deception: The Politics of Megaproject Approval.] , no. 22, Spring/Summer 2005, pp. 50-59.] Gehry explained how he did it. First, he ensured that what he calls the "" prevailed during construction, in order to prevent political and business interests from interfering with the design. Second, he made sure he had a detailed and realistic cost estimate before proceeding. Third, he used (Computer-Aided Three-dimensional Interactive Application) and close collaboration with the individual building trades to control costs during construction.

Gehry is considered a modern architectural icon and celebrity, a major "Starchitect" &mdash; a describing the phenomenon of architects attaining a sort of celebrity status. The term usually refers to architects known for dramatic, influential designs that often achieve fame and notoriety through their spectacular effect. Other notable celebrity architects include , , , , and Norman Foster, all of whose works tend toward the edgy and subversive. Gehry came to the attention of the public in 1972 with his "" . He has appeared in Apple's black and white "Think Different" pictorial ad campaign that associates offbeat but revered figures with Apple's . He even once appeared as himself in "" in the episode "," where he himself by intimating that his ideas are derived by looking at a crumpled paper ball. He also voiced himself on the TV show "Arthur", where he helped Arthur and his friends design a new treehouse. Steve Sample, , told Gehry that, "...After , you are our most prominent graduate."

In 2005, veteran , a friend of Gehry's, made the documentary "" with appreciative comments by Philip Johnson, Ed Ruscha, Julian Schnabel, and Dennis Hopper, and critical ones by Hal Foster supplementing dialogue between Gehry and Pollack about their work in two collaborative art forms with considerable commercial constraints and photography of some buildings Gehry designed. It was released on DVD by Sony Pictures Home Entertainment on August 22, 2006, together with an interview of Sydney Pollack by fellow director Alexander Payne and some audience questions following the premiere of the film.

* On December 6, 2006, California Governor Arnold Schwarzenegger and First Lady Maria Shriver inducted Frank Gehry into the located at .
* On November 3, 2004, Gehry was awarded the prestigious Woodrow Wilson Award for public service by the of the Smithsonian Institution in New York City.