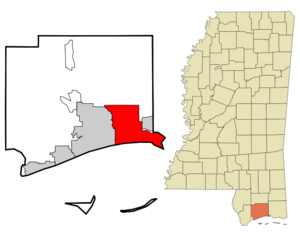 mapsize = 250x200px
map_caption = Location of Biloxi in the State of Mississippi

Biloxi (pronEng|bəˈlʌksi [Biloxi is pronEng|bəˈlʌksi or "Bah-luck-see".] ) is a city in Harrison County, , in the . The 2000 census recorded the population as 50,644. Biloxi is co– with the larger city Gulfport, in the Gulfport&ndash;Biloxi, Mississippi Metropolitan Statistical Area, which is included in the Gulfport&ndash;Biloxi&ndash;Pascagoula, Mississippi Combined Statistical Area. Pre-Katrina, Biloxi was the third largest city in Mississippi; but with its population losses following that storm, Hattiesburg now has that distinction.

The beachfront of Biloxi lies directly on the , with barrier islands scattered off the coast and into the .

lies within the city and is home to the 81st Training Wing of the U.S. Air Force.

The history of Biloxi, Mississippi, spans more than 300 years.

The first permanent settlement in French Louisiana was founded at , now in and referred to as Old Biloxi, in 1699 under the direction of , with Louisiana separated from Spanish at the Perdido River near Pensacola (founded 1559 & again 1698).

The name of Biloxi in French was "Bilocci" (with "fort Maurepas"),

Due to fears of tides and hurricanes in the 1700s, the capital of French Louisiana was later moved by colonial governor Bienville, in 1723, from Biloxi to a new inland harbor town named "La Nouvelle-Orléans" (), built for the purpose in 1718-1720.

English rule persisted from 1763 to 1779, and then Spanish rule from 1779 to 1798. Despite this, the character of Biloxi remained mostly French.

Now that ownership was settled, Biloxi began to grow. It became a summer resort, with the advantages of close proximity to New Orleans and ease of access via water. Summer homes were built by well-to-do farmers and commercial figures. Hotels and rental cottages came into existence to serve those who could not afford their own homes.

One of Biloxi's most known features has been Biloxi Lighthouse, which was built in and then shipped south and completed in May 1848.

In the early stages of the Civil War, Ship Island was captured by Union forces, which led to the effective Union capture of Biloxi as well. No major battles were fought in the area, and Biloxi did not suffer direct damage from the war. Some local Union sentiment could be discerned following the war's conclusion.

In the postbellum period, Biloxi again emerged as a vacation spot. Its popularity as a destination increased with railroad access. In 1881, the first was built in the town, leading to others soon joining the location. Biloxi grew again, and as different national groups came to work in the seafood factories, Biloxi gained a more heterogeneous nature.

During , the built , which became a major site and site for aircraft maintenance. The Biloxi economy boomed as a result,

Biloxi's history dates back to a period in the 1940s, when open if technically illegal gambling took place in a casino within the .

In the early 1960s, the Gulf Coast again emerged as a prime alternative to as a southern vacation destination among Northerners, with Biloxi a center of the focus.

With the introduction of legal gambling in Mississippi in the 1990s, Biloxi was again transformed. It became an important center for casinos, and the hotels and complexes brought millions of dollars in tourism revenue to the city. The more famous casino complexes were the casino resort, the , Casino Magic, Grand Casino, Isle of Capri Casino Resort, , , and Imperial Palace. Like Tunica County in the northern part of the state, Biloxi and the surrounding Gulf Coast region was considered a leading gambling center in the .

By the early 2000s, Biloxi's economy rested on the three prongs of seafood, tourism, and gaming.

On , hit the with high winds, heavy rains and a convert|30|ft|m|sing=on storm surge, causing massive damage to the area.Katrina came ashore during the high tide of 6:56AM, +2.3 feet more. ["2005 NOAA Tide Predictions: Biloxi (Cadet Point), Biloxi Bay" (2005), tide on 29-Aug-2005, "NOAA", web: [http://tidesandcurrents.noaa.gov/get_predictions.shtml?year=2005&stn=0551+South+Pass&secstn=Biloxi+(Cadet+Point),+Biloxi+Bay&thh=%2b2&thm=4&tlh=%2b1&tlm=30&hh=*1.38&hl=*1.38 NOAA-tide-tables] .] Commenting on the power of the storm and the damage, Mayor said, "This is our tsunami." [http://www.sunherald.com/mld/sunherald/news/special_packages/hurricane_katrina/12514756.htm] Mississippi Governor was quoted as saying the destruction of the Mississippi coastline by looked like an American .

On the morning of , in an interview on , Governor Barbour stated that 90% of the buildings along the coast in Biloxi and neighboring Gulfport had been destroyed by the hurricane. Several of the "floating" casinos were torn off their supports and thrown inland, contributing to the damage. All coastal churches were destroyed or severely damaged.

Many churches were damaged, including St. Michael's Catholic Church (see photo at right), which was gutted by the storm surge, breaking the entry doors and stained-glass windows along the first floor; however, the interior was later removed, and the structure was still solid enough to allow repairing the church.

Hurricane-force winds persisted for 17 hours and tore the branches off many coastal oak trees, but the tree trunks survived the convert|30|ft|m|sing=on flood and many have since regrown smaller branches. Some reconstructed homes still have the appearance, and miles inland, with less flooding, shopping centers have re-opened.

Harrison County Coroner Gary T. Hargrove told the mayor and City Council that Hurricane Katrina had claimed 53 victims in Biloxi, as of , . Of the 53 confirmed fatalities in Biloxi, a figure that includes one unidentified male, Hargrove said the average age was 58, with youngest being 22 and oldest, 90; and 14 were females and 39 were males.

Biloxi is also the site of a well-known memorial to the Katrina victims, built by the crew and volunteers of "". [http://www.gulf-coast.com/Attractions/KatrinaMemorialBiloxi.html]

Many casinos were damaged or destroyed by Hurricane Katrina. Of the casinos that were located in Biloxi, eight have reopened since Katrina. They are: the Grand Biloxi Casino Hotel Spa(formerly known as Grand Casino Biloxi), the Hard Rock Hotel & Casino, the Isle of Capri Casino and Resort, the Palace Casino Resort, the IP Casino Resort Spa (formerly known as Imperial Palace), Treasure Bay Casino, Boomtown Casino, and the Beau Rivage, which re-opened on the first anniversary of Hurricane Katrina.

Multiple plans have been laid out to rebuild the waterfront areas of Biloxi, and the federal government has recently announced that it is considering giving up to 17,000 Mississippi coast homeowners the option to sell their properties so that a vast hurricane-protection zone can be implemented. [ [http://ap.google.com/article/ALeqM5ib5MyH-XXFnw4D_gLfXvd4hmx4SQD8S64ME80 Gov't May Buy Thousands of Miss. Homes] AP via Google News. Retrieved October 17, 2007.] Meanwhile, the city of Biloxi is rapidly implementing plans to allow the redevelopment of commercial properties south of highway 90. [ [http://www.wlox.com/Global/story.asp?S=7222173&nav=6DJI Beachfront Development On Biloxi's Front Burner] [http://www.wlox.com/ WLOX News] . Retrieved on October 17, 2007.]

Biloxi is served by 's .

The City of Biloxi is served by the and the .

Biloxi has become home to several casino resort hotels, with 24-hour gambling, concert entertainment shows, and several restaurants. Some of the casino resorts are the following:

*Imperial Palace re-opened as IP Hotel & Casino on Dec. 22, 2005.
*Isle of Capri Casino Resort re-opened in late December 2005.
*Palace Casino Resort re-opened in late December 2005.
* Resort & Casino re-opened , , on the first anniversary of Hurricane Katrina.
*Boomtown Casino re-opened in 2006.
*Hard Rock Hotel & Casino, which had initially hoped to open for post-Katrina business in Summer 2006, but opened later than expected in June 2007.
*Treasure Bay Casino Resort re-opened in summer 2006.
*Grand Biloxi is re-opened and has built a casino in its formerly named Bayview Hotel.
*Bacaran Bay Resort is being redesigned and will soon be under construction on Caillavet Street between and .
*Jimmy Buffet's , announced by Harrah's to be built on the site of the old and Casino Magic properties.
* Resort is nearby Gulfport's only casino and home to one of world-famous chef Emeril Lagasse's restaurants.
* is located in Bay St. Louis and includes an on-site golf course and movie cinema decor.
*The Silver Slipper was the first land-based casino to open following Hurricane Katrina. This beachfront resort is located just outside Bay St. Louis, west of Biloxi.
*Biloxi's neighbor will be home to former MGM exec Peter Simon's newly approved casino .
* will also be the future home of Royal D'Iberville Casino Resort, a newly approved project.
*Bayview Casino Resort will begin construction in January 2008 on the Back Bay of Biloxi.
*Vue Crescente Resort has begun its application to house a casino within its new twin 30 floor condo towers that are being built on the Back Bay of Biloxi.
*Tivoli Resort, The Ocean Club, and a Long Beach project are recently proposed casino additions to the metro area.

Biloxi's main highway is (Beach Boulevard), which runs along the beach and by the casinos. It connects the city to Gulfport and points westward and to Ocean Springs and Pascagoula to the east. The across Biloxi Bay was rebuilt following Hurricane Katrina, and was fully reopened in April 2008.

Through the northern sections of the city, passes through, connecting the city to , , and . Interstate 110 splits off from I-10 at D'Iberville and heads south across the Back Bay of Biloxi to U.S. 90 near Beau Rivage, providing the city with an important hurricane evacuation route.

Other highways serving the area include:
* (Runs concurrent with I-110 for the first few miles)
*

In the center of what fisheries biologists term "The Fertile Fisheries Crescent", Biloxi offers some of the finest sportsfishing along the entire northern coast of the Gulf of Mexico. , , Spanish and , , , , s, and more are all available to anglers during the fishing season. It is not known how Hurricane Katrina affected this .

The city is home to the , an minor league hockey team.

*Biloxi is the setting of 's play and film , which starred Mathew Broderick. "Biloxi Blues" is the story of army recruits training at Keesler Field, the former name of the present day Keesler Air Force Base during World War II.
*Biloxi is the setting of several novels, including "", "", "The Firm", "", and "".
*In 's , a man named "Blocks" Biloxi from Biloxi, Mississippi (mislabeled as Biloxi, Tennessee in the novel) crashes Tom and Daisy Buchanon's wedding.
*The character Marvin F. Hinton ("Roadblock") was born in Biloxi, Mississippi.
*The film "" starring is partially set in Biloxi.
*In the "" series, the character Alice Cullen was born in Biloxi and has a niece living there.
*In the show "Family Matters", Steve Urkel's cousin Myrtle Urkel, who frequently chases Eddie Winslow when she visits Chicago, is from Biloxi, Mississippi.
*American singer/songwriter once wrote and recorded a song called "Biloxi", for which he was inspired by a few images he saw of the city.
*RFC 3261 "SIP: Session Initiation Protocol", the authors use Biloxi in an example to explain how a call is made through two SIP proxies.