In the early years of Murad's reign, he was under the control of his relatives. During this period, peace and harmony in the Ottoman lands were completely lost and tyrants took control of the cities. His absolute rule started around 1632, when he took the authority and repressed all the tyrants, and he re-established the supremacy of Sultan. 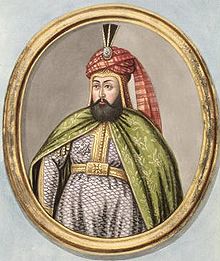 Portrait of Murad IV. The portrait has been printed using the Giclée process.

Murad IV was for a long time under the control of his relatives and during his early years as Sultan, his mother, Kösem Sultan, essentially ruled through him. The Empire fell into anarchy; the Safavid Empire invaded Iraq almost immediately, Northern Anatolia erupted in revolts, and in 1631 the Janissaries stormed the palace and killed the Grand Vizier, among others. Murad IV feared suffering the fate of his elder brother, Osman II (1618–22), and decided to assert his power.

Kösem Sultan (1589–1651) the mother of Murad IV who exercised a decisive influence on Murad, essentially ruling through him

Murad IV tried to quell the corruption that had grown during the reigns of previous Sultans, and that had not been checked while his mother was ruling through proxy. He addressed this corruption with several policy changes, such as limiting wasteful spending.

Murad IV also banned alcohol, tobacco, and coffee in Constantinople.[4] He ordered execution for breaking this ban. He would patrol the streets and taverns of Constantinople in civilian clothes at night, policing the enforcement of his command. By prohibiting tobacco he assimilated the idles gathering in the taverns. He restored the judicial regulations by very strict punishments, including execution. Halil İnalcık reports that even though he was a ruthless supporter of alcohol prohibition, Murat IV was a habitual drinker.[5]

Militarily, Murad IV's reign is most notable for the war against Persia in which Ottoman forces invaded Azerbaijan, occupied Yerevan, Tabriz and Hamadan, and recaptured Baghdad in 1638. The sultan had a famous quote about the fall of Baghdad: "Bağdat'ı almaya çalışmak, Bağdat'ın kendinden daha mı güzeldi ne" ("I guess trying to capture Baghdad was better than Baghdad itself").[6]

While he was encamped in Baghdad, Murad IV is known to have met the Mughal Emperor Shah Jahan's ambassadors: Mir Zarif and Mir Baraka, who presented 1000 pieces of finely embroidered cloth and even armor. Murad IV gifted them with the finest weapons, saddles and Kaftans and ordered his forces to accompany the Mughals to the port of Basra, where they set sail to Thatta and finally Surat.[7]

Murad IV himself commanded the Ottoman army in the last years of the war, and proved to be an outstanding field commander. He was the third last[clarification needed] Ottoman Sultan to command an army on the battlefield.[citation needed] During his campaign to Iran, he annihilated all rebels in Anatolia and restored the order of the state.[citation needed]

The war was concluded by the Treaty of Kasrı Şirin in May 1639, which restored Mesopotamia to the Ottomans. After his return to Constantinople, he ordered respected statesmen of the Empire to prepare a new economic and political project to return to the Empire the old successful days.

Murad IV was the last Warrior Sultan who led campaigns in front of his army and fought on the battlefield. His physical strength was phenomenal, which is described in detail on the books of Evliya Çelebi. He was especially known for his exceptional strength in wrestling - capable of fighting several opponents at the same time. His favorite weapon was a huge mace, weighing 60 kilograms (132 lbs), which he wielded effortlessly with a single hand[citation needed]. Among his other favourite weapons are a longbow and a large two-handed broadsword weighing more than 50 kilograms (110 lbs). His weapons are today displayed at the Topkapı Palace Museum in Istanbul, intact and well preserved.

Sultan Murad IV put emphasis on architecture and in his period many monuments were erected. Some of them are Meydanı Mosque, Bayram Pasha Dervish Lodge, Tomb, Fountain, Primary School, Konya Serefeddin Mosque.

The Mughal Emperor Shah Jahan had exchanged ambassadors with the Ottoman Sultan Murad IV, it was through these exchanges that he received Isa Muhammad Effendi and Ismail Effendi, two Turkish architects and students of the famous Koca Mimar Sinan Agha. Both of them later comprised among the Mughal team that would design and build the Taj Mahal.

Murad IV died in Constantinople at the age of 27 in 1640. There are two separate claims on the cause of death. Western sources claim Murad IV, who had outlawed alcohol, died from cirrhosis of the liver. Ottoman sources claim that he died of gout.

On his deathbed he ordered the execution of his brother, Ibrahim (1640–48) Kiran Osman, which would have meant the end of the Ottoman line, but the order was not carried out.