Born in Istanbul, Mustafa IV was the child of Sultan Abdülhamid I (1774–1789) and Valide Sultan Ayse Seniyeperver. His mother was responsible for his education, but Mustafa preferred to live a life of pleasure instead of focusing on his studies.

Both he and his brother, Mahmud II, were the last remaining male members of the house of Osman I after their cousin, the reformist Sultan Selim III (1789–1807). They alone were therefore eligible to inherit the throne from Selim, by whom they were treated favorably. Since Mustafa was the eldest, he took precedence over his brother to the throne.[1] During his short reign, Mustafa would both save his cousin's life, and order him murdered.Mustafa was Sultan Selim III's favourite crown prince, but he deceived his Cousin and co-operated with the rebels and took his throne. 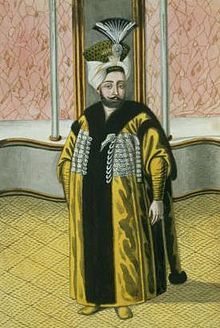 Mustafa IV in his royal robes.

Mustafa came to the throne in the wake of the turbulent events that led to the fatwa against Selim for "introduce[ing] among the Moslems the manners of infidels and show[ing] an intention to suppress the Janissaries."[2] Selim fled to the palace, where he swore fealty to his cousin as the new sultan, and attempted to commit suicide. Mustafa spared his life by smashing the cup of poison that his cousin attempted to drink.[2]

Mustafa's brief reign was turbulent. Immediately upon ascending to the throne, the janissaries rioted throughout Istanbul, looting and murdering anyone who appeared to support Selim.[3] More threatening, however, was a truce signed with the Russians, which freed Mustafa Bayrakdar, a pro-reformist commander stationed on the Danube to march his army back to Constantinople in an effort to restore Selim. With the aid of the Grand Vizier of Adrianople, the army marched on the capital and seized the palace.[2]

Attempting to secure his position by positing himself as the only surviving heir of Osman, Mustafa ordered both Selim and his brother Mahmud murdered at Topkapı Palace, Istanbul. He then ordered his guards to show the rebels Selim's body,[3] and they promptly tossed it into the inner courtyard of the palace. Mustafa then ascended his throne, assuming that Mahmud was also dead, but the prince had been hiding in the furnace of a bath.[4] Just as the rebels demanded that Mustafa "yield his place to a worthier," Mahmud revealed himself, and Mustafa was deposed. The failure of his short reign prevented the efforts to undo the reforms, which continued under Mahmud. Mustafa was later killed on Mahmud's orders. His Wives : Shevr-i Nur, Dil-pezir, Seyyare, Peyk-i Dil. His only child, Emine died in 1808, within 6 Months.