He was born at Manisa Palace, the son of sultan Murad III, whom he succeeded in 1595. His mother was Safiye Sultan, originally named Sofia Baffo, a Venetian noblewoman related to his father's mother.

He married Valide Sultan Handan Sultan, an ethnic Greek originally named Helena and the mother of Ahmed I and Mustafa I.

Mehmed III remains notorious even in Ottoman history for having nineteen of his brothers and half brothers executed to secure power.[1][2] They were all strangled by his deaf-mutes. Mehmed III was an idle ruler, leaving government to his mother Safiye Sultan, the valide sultan.[3] The major event of his reign was the Austro-Ottoman War in Hungary (1593–1606). 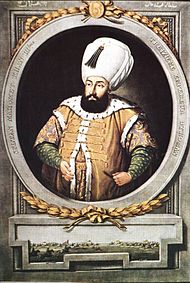 Ottoman defeats in the war caused Mehmed III to take personal command of the army, the first sultan to do so since Suleyman I. Mehmed III's armies conquered Eger in 1596 and defeated the Habsburg and Transylvanian forces at the Battle of Keresztes[4] (Turkish for Battle of Hacova) during which the Sultan had to be dissuaded from fleeing the field halfway through the battle. The next year it was noted, "the doctors declared that the Sultan cannot leave for war on account of his bad health, produced by excesses of eating and drinking".

In 1599, the third year of Mehmed III's reign, Queen Elizabeth I sent a convoy of gifts to the Ottoman court. These gifts were originally intended for the sultan's predecessor, Murad III, who had died before they had arrived. Included in these gifts was a large jewel-studded clockwork organ that was assembled on the slope of the Royal Private Garden by a team of engineers including Thomas Dallam. The organ took many weeks to complete and featured dancing sculptures such as a flock of blackbirds that sung shook their wings at the end of the music.[5] The musical clock organ was destroyed by the succeeding sultan Ahmed I. Also among the English gifts was a ceremonial coach, accompanied by a letter from the Queen to Mehmed's mother, Walide Safiye. These gifts were intended to cement relations between the two countries, building on the trade agreement signed in 1581 that gave English merchants priority in the Ottoman region.[6] Under the looming threat of Spanish military presence, England was eager to secure an alliance with the Ottomans, the two nations together having the capability to divide the power. Elizabeth's gifts arrived in a large 27 gun merchantman ship that Mehmed personally inspected, a clear display of English maritime strength that would prompt him to build up his fleet over the following years of his reign. The Anglo-Ottoman alliance would never see consummation however, with relations between the nations growing stagnant due to anti-European sentiments reaped from the worsening Austro-Ottoman War and the deaths of Walide Safiye's interpreter and the pro-English chief Hasan Pasha.[6][7]

Mehmed III was more conservative than his predecessor and largely halted artistic patronage, including support of the Society of Miniaturists.

His third oldest son, Jahja, is of interest to some because he reportedly converted to Eastern Orthodox Christianity and campaigned for a good part of his life to gain the Ottoman Imperial throne, to which his younger brother Ahmed I succeeded to in 1603. Feeling cheated, he spent years developing and implementing conspiracies to further his ambitions. Travelling mostly across Western Europe, he promised several backers as well as four Roman Catholic Popes that he would make Christianity the state religion of the Ottoman sultanate if he ever succeeded to the Imperial throne.[8]