Stellar kinematics is the study of the movement of stars without needing to understand how they acquired their motion. This differs from stellar dynamics, which takes into account gravitational effects. The motion of a star relative to the Sun can provide useful information about the origin and age of a star, as well as the structure and evolution of the surrounding galaxy.

In astronomy, it is widely accepted that most stars are born within molecular clouds known as stellar nurseries. The stars formed within such a cloud compose open clusters containing dozens to thousands of members. These clusters dissociate with time. Stars that separate themselves from the cluster's core are designated as members of the cluster's stellar association. If the remnant later drifts through the galaxy as a somewhat coherent assemblage, then it is termed a moving group.

The component of stellar motion toward or away from the Sun, known as radial velocity, can be measured from the spectrum shift caused by the Doppler effect. The transverse, or proper motion must be found by taking a series of positional determinations against more distant objects. Once the distance to a star is determined through astrometric means such as parallax, the space velocity can be computed.[1] This is the star's actual motion relative to the Sun or the local standard of rest (LSR). The latter is typically taken as a position at the Sun's present location that is following a circular orbit around the galactic center at the mean velocity of those nearby stars with low velocity dispersion.[2] The Sun's motion with respect to the LSR is called the peculiar solar motion.

The stars in the Milky Way can be subdivided into two general populations, based on their metallicity, or proportion of elements with atomic numbers higher than helium. Among nearby stars, it has been found that population I, higher metallicity stars have generally lower velocities than older, population II stars. The latter have elliptical orbits that are inclined to the plane of the galaxy.[5] Comparison of the kinematics of nearby stars has also led to the identification of stellar associations. These are most likely groups of stars that share a common point of origin in giant molecular clouds.[6]

Within the Milky Way galaxy, there are three primary components of stellar kinematics: the disk, halo and bulge or bar. These kinematic groups are closely related to the stellar populations in the galaxy, forming a strong correlation between the motion and chemical composition, thus indicating different formation mechanisms. The halo may be further sub-divided into an inner and outer halo, with the inner halo having a net prograde rotation with respect to the galaxy and the outer a net retrograde movement.[7] 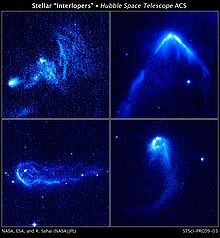 Four runaway stars plowing through regions of dense interstellar gas and creating bright bow waves and trailing tails of glowing gas. The stars in these NASA Hubble Space Telescope images are among 14 young runaway stars spotted by the Advanced Camera for Surveys between October 2005 and July 2006

A runaway star is one which is moving through space with an abnormally high velocity relative to the surrounding interstellar medium. The proper motion of a runaway star often points exactly away from a stellar association, whose member it therefore once must have been before it was hurled out.

Two possible mechanisms may give rise to a runaway star:

While both mechanisms are theoretically possible, astronomers generally favour the supernova hypothesis as more likely in practice.

One example of a related set of runaway stars is the case of AE Aurigae, 53 Arietis and Mu Columbae, all of which are moving away from each other at velocities of over 100 km/s (for comparison, the Sun moves through the galaxy at about 20 km/s faster than the local average). Tracing their motions back, their paths intersect near to the Orion Nebula about 2 million years ago. Barnard's Loop is believed to be the remnant of the supernova that launched the other stars.

Another example is the X-ray object Vela X-1, where photodigital techniques reveal the presence of a typical supersonic bow shock hyperbola.

High-velocity stars are very old stars that do not share the motion of the Sun or most other stars in the solar neighbourhood which are in similar circular orbits around the centre of the Galaxy. Rather, they travel in elliptical orbits, which often take them well outside the plane of the Galaxy. Although their orbital velocities in the Galaxy may be no faster than the Sun’s, their different paths result in the high relative velocities.

Typical examples are the halo stars passing through the disk of the galaxy at steep angles. One of the nearest 45 stars, called Kapteyn's star, is an example of the high-velocity stars that lie near the Sun. Its observed radial velocity is -245 km/s, and the components of its space velocity are U = 19 km/s, V = -288 km/s, and W = -52 km/s.

Hypervelocity stars (HVSs), or, less formally, Exiled Stars,[8] are stars with a velocity so great that they are able to escape the gravitational pull of the galaxy. Ordinary stars in the galaxy have velocities on the order of 100 km/s, while hypervelocity stars (especially those near the center of the galaxy, which is where most are thought to be "produced"), have velocities on the order of 1000 km/s.

The existence of HVSs was first predicted by J. Hills in 1988.[9] The first HVS was discovered in 2005 by Warren Brown and collaborators[10] at the Harvard-Smithsonian Center for Astrophysics. Currently, sixteen are known, one of which is believed to originate from the Large Magellanic Cloud rather than the Milky Way.[11] All of the currently known HVSs are over 50,000 parsecs away and are unbound from the galaxy.

It is believed that about 1000 HVSs exist in our Galaxy. Considering that there are around 100 billion stars in the Milky Way, this is a minuscule fraction (~0.000001%).[citation needed]

The main production method for HVSs is summarized as thus: they are believed to originate by close encounters of binary stars with the supermassive black hole in the centre of the Milky Way. One of the two partners is captured by the black hole, while the other escapes with high velocity. Also, it is worth noting that "captured" does not necessarily mean "swallowed", for in all likelihood the companion to the HVS will never fall into the black hole.

Known HVSs are main-sequence stars with masses a few times that of the Sun.

Some neutron stars are inferred to be traveling with similar speeds, however they are unrelated to both HVSs and the HVS ejection mechanism. Neutron stars are the remnants of supernova explosions, and their extreme speeds are very likely the result of an asymmetric supernova explosion. The neutron star RX J0822-4300,[13] which was measured to move at a record speed of over 1500 km/s (0.5% c) in 2007 by the Chandra X-ray Observatory, is thought to have been produced this way.

A set of stars with similar space motion and ages is known as a kinematic group.[14] These are stars that could share a common origin, such as the evaporation of an open cluster, the remains of a star forming region, or collections of overlapping star formation bursts at differing time periods in adjacent regions.[15] Most stars are born within molecular clouds known as stellar nurseries. The stars formed within such a cloud compose gravitationally bound open clusters containing dozens to thousands of members with similar ages and compositions. These clusters dissociate with time. Groups of young stars that escape a cluster, or are no longer bound to each other, form stellar associations. As these stars age and disperse, their association is no longer readily apparent and they become moving groups of stars.

Astronomers are able to determine if stars are members of a kinematic group because they share the same age, metallicity, and kinematics (radial velocity and proper motion). As the stars in a moving group formed in proximity and at nearly the same time from the same gas cloud, although later disrupted by tidal forces, they share similar characteristics.[16]

A stellar association is a very loose star cluster, whose stars share a common origin, but have become gravitationally unbound and are still moving together through space. Associations are primarily identified by their common movement vectors and ages. Identification by chemical composition is also used to factor in association memberships.

Stellar associations were first discovered by the Armenian astronomer Viktor Ambartsumian in 1947.[17] The conventional name for an association uses the names or abbreviations of the constellation (or constellations) in which they are located; the association type, and, sometimes, a numerical identifier. 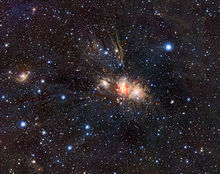 Infrared ESO's VISTA view of a stellar nursery in Monoceros.

Viktor Ambartsumian first categorized stellar associations into two groups, OB and T, based on the properties of their stars.[17] A third category, R, was later suggested by Sidney van den Bergh for associations that illuminate reflection nebulae.[18] The OB, T, and R associations form a continuum of young stellar groupings. But it is currently uncertain whether they are an evolutionary sequence, or represent some other factor at work.[19] Some groups also display properties of both OB and T associations, so the categorization is not always clear-cut.

Young associations will contain 10–100 massive stars of spectral class O and B, and are known as OB associations. These are believed to form within the same small volume inside a giant molecular cloud. Once the surrounding dust and gas is blown away, the remaining stars become unbound and begin to drift apart.[20] It is believed that the majority of all stars in the Milky Way were formed in OB associations.[20] O class stars are short-lived, and will expire as supernovae after roughly a million years. As a result, OB associations are generally only a few million years in age or less. The O-B stars in the association will have burned all their fuel within 10 million years. (Compare this to the current age of the Sun at about 5 billion years.)

The Hipparcos satellite provided measurements that located a dozen OB associations within 650 parsecs of the Sun.[21] The nearest OB association is the Scorpius-Centaurus Association, located about 400 light years from the Sun.[22]

OB associations have also been found in the Large Magellanic Cloud and the Andromeda Galaxy. These associations can be quite sparse, spanning 1,500 light years in diameter.[23]

Associations of stars that illuminate reflection nebulae are called R associations, a name suggested by Sidney van den Bergh after he discovered that the stars in these nebulae had a non-uniform distribution.[18] These young stellar groupings contain main sequence stars that are not sufficiently massive to disperse the interstellar clouds in which they formed.[19] This allows the properties of the surrounding dark cloud to be examined by astronomers. Because R-associations are more plentiful than OB associations, they can be used to trace out the structure of the galactic spiral arms.[25] An example of an R-association is Monoceros R2, located 830 ± 50 parsecs from the Sun.[19]

Moving groups were studied intensely by Olin Eggen in the 1960s[26] A list of the nearest young moving groups has been compiled by López-Santiago et al.[27] The closest is the Ursa Major Moving Group which includes all of the stars in the Plough/Big Dipper asterism except for α Ursae Majoris and η Ursae Majoris. This is sufficiently close that the Sun lies in its outer fringes, without being part of the group. Hence, while members are concentrated at declinations near 60° N, some outliers are as far away across the sky as Triangulum Australe at 70° S.

A stellar stream is an association of stars orbiting a galaxy that was once a globular cluster or dwarf galaxy that has now been torn apart and stretched out along its orbit by tidal forces.

Some kinematic groups include:[28]