Big Dipper
This article is about the asterism. For other uses, see Big Dipper (disambiguation). 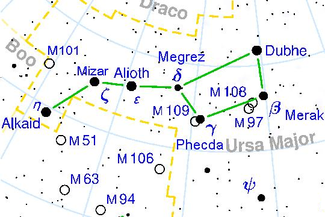 The Plough, also known as the Big Dipper or the Saptarishi (after the seven rishis), is an asterism of seven stars that has been recognized as a distinct grouping in many cultures from time immemorial. The component stars are the seven brightest of the formal constellation Ursa Major.

The Plough is significant because the North Star (Polaris), the current northern pole star on Earth, can be found using it. Polaris is part of the "Little Dipper", Ursa Minor.

In Hindu astronomy, it is referred to as Sapta Rishi, meaning the "Seven (Great) Sages".

The seven stars are very important in Taoist astrology. Sometimes there are said to be nine stars — besides the seven visible stars, two invisible "attendant" stars, one on either side of the star Alkaid. Legend has it that there used to be 9 stars (北斗九星) but 2 had since faded and that those who can see the 2 unseen stars will lead a long life. The Goddess Doumu is said to have given birth to the nine stars which make up the constellation. 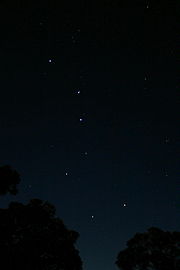 The Big Dipper seen from Kauai.

In both Ireland and Great Britain, this pattern is known as the Plough or sometimes the Saucepan.[citation needed] It is also occasionally referred to as the Butcher's Cleaver in northern England. In Ireland the figure is sometimes called the Starry Plough; the symbol of the Starry Plough has been used as a political symbol by Irish Republican and left wing movements.

Known as Charles his waine in some areas of England, the Plough was formerly called by the old name Charles' Wain[1] ("wain" meaning "wagon," and derived from the still older Carlswæn), as it still is in Scandinavia, Karlavagnen, Karlsvogna, or Karlsvognen. In the northeast of England it is sometimes known as Charlie's Waggon. A folk etymology holds that it was named after Charlemagne, but this common Germanic name meant the men's wagon (the churls' wagon), in contrast to the women's wagon (the Little Dipper).[2][3] An older Odin's Wain may have preceded these Nordic designations.[1] Similarly, in Romanian and most Slavic languages it is known as "the Great Wagon", as opposed to "the Small Wagon," the Little Dipper. In German it is called Großer Wagen (Great Cart).

The Big Dipper seen from Berlin (Germany) in June 2011.

In Dutch, its official name is Grote Beer ( Big Bear), but often called Steelpannetje (saucepan), because of its resemblance to the utensil. In Finland the figure is known as Otava and widely used as a cultural symbol. In Finnish dialects, the word otava means a 'salmon net', but this word is largely obsolete in modern Finnish.

In Hungary, it is commonly called Göncölszekér ("Göncöl's cart") after a figure in Hungarian mythology, a táltos who carried medicines in his cart that could cure any disease.[4]

These seven stars (septentriones, from the phrase septem triōnēs, meaning "seven plough oxen"[5]) are the origin of the Latin word septentriōnēs meaning "north" and now found as the adjective septentrional (northern) in English, French, Italian, Portuguese and Spanish. This etymology goes back to a passage in Varro (Marcus Terentius) who explains that triōn- (a word not attested elsewhere) means "plough ox" and derives the form from terō, one of whose meanings is "thresh grain by rubbing". The derivation is acceptable (Latin short vowels often syncopate before -r- in medial syllables), but the meaning, if Varro is right about the root derivation, is surely "threshing ox", as the seven stars (oxen) perpetually wheel about the pole star like oxen on a threshing floor. A different etymology appeals to *septem astr-iōn- "seven stars" (aster-), which is not obviously wrong (if lacking poetic inspiration), but the development of *-nstr- to -ntr- is not without problems.

In the English speaking regions of North America (Canada and the United States) the Plough is known as the Big Dipper because the major stars can be seen to follow the rough outline of a large ladle or dipper. This figuration appears to be derived originally from Africa, where it was sometimes seen as a drinking gourd. In the 19th century, runaway slaves would "follow the Drinking Gourd" to the north and freedom.

A widespread American Indian figuration had the bowl as a bear. Some groups considered the handle to be three cubs following their mother, while others pictured three hunters tracking the bear. (For example, see Abenaki mythology.) The Dipper appears on some Tribal flags, while the flag of the state of Alaska features a stylized Big Dipper and North Star. The Anishinaabe or Ojibway First Nation know the Big Dipper as Ojig-anang or the Fisher Star (after the fisher cat).

Within Ursa Major the stars of the Big Dipper have Bayer designations in consecutive Greek alphabetical order from the bowl to the handle.

The Big Dipper's bowl and part of the handle photographed from the International Space Station.
Mizar and Alcor are at the upper right.

In the same line of sight as Mizar, but three light-years beyond it, is the star Alcor (80 UMa). Together they are known as the Horse and Rider. At fourth magnitude, Alcor would normally be relatively easy to see with the unaided eye, but its proximity to Mizar renders it more difficult to resolve, and it has served as a traditional test of sight. Mizar itself has four components and thus enjoys the distinction of being part of an optical binary as well as being the first-discovered telescopic binary (1617) and the first-discovered spectroscopic binary (1889).

Five of the stars of the Big Dipper are at the core of the Ursa Major Moving Group. The two at the ends, Dubhe and Alkaid, are not part of the swarm, and are moving in the opposite direction. Relative to the central five, they are moving down and to the right in the map. This will slowly change the Dipper's shape, with the bowl opening up and the handle becoming more bent. In 50,000 years the Dipper will no longer exist as we know it, but be re-formed into a new Dipper facing the opposite way. The stars Alkaid to Phecda will then constitute the bowl, while Phecda, Merak, and Dubhe will be the handle! 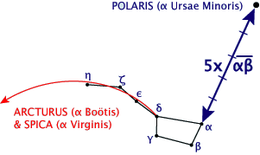 Not only are the stars in the Big Dipper easily found themselves, they may also be used as guides to yet other stars. Thus it is often the starting point for introducing Northern Hemisphere beginners to the night sky:

Additionally, the Dipper may be used as a guide to telescopic objects:

Book XVIII of Homer's Iliad mentions it as "the Bear, which men also call the Wain." [7]

In Tolkien's Middle-earth mythos, it is called the Valacirca (Sickle of the Valar), the sign of Hope signifying doom for Evil, while in T.A. Barron's Great Tree of Avalon series, it is called the Wizard's Staff, symbolizing Merlin's staff.

It is a prominent symbol in the Fist of the North Star manga/anime series; Kenshiro, has scars on his chest in the Big Dipper's configuration. It is identified as an omen: "When the great bear appears, violence will follow."

In addition to appearing on the flags of political entities, the Dipper has also been used in corporate logos.[8]