The Durban Review Conference is the official name of the 2009 United Nations World Conference Against Racism (WCAR), also known as Durban II. The conference ran from Monday 20 April to Friday 24 April 2009, and took place at the United Nations Office in Geneva, Switzerland.[1] The conference was called under the mandate of United Nations General Assembly resolution 61/149 (passed in 2006) with a mandate to review the implementation of the The Durban Declaration and Programme of Action from the 2001 World Conference against Racism, Racial Discrimination, Xenophobia and Related Intolerance which took place in Durban, South Africa.

The conference was boycotted by Australia, Canada, Germany, Israel, Italy, the Netherlands, New Zealand, Poland, and the United States. The Czech Republic discontinued its attendance on the first day, and twenty-three other European Union countries sent low-level delegations. The western countries had expressed concerns that the conference would be used to promote anti-Semitism and laws against blasphemy perceived as contrary to the principles of free speech,[2][3][4][5][6] and that the conference would not deal with discrimination against homosexuals.[7] European countries also criticized the meeting for focusing on the West and ignoring problems of racism and intolerance in the developing world.

Controversy surrounded the attendance of Iranian President Mahmoud Ahmadinejad at the conference due to his past statements on Israel and the Holocaust. On the first day of the conference, Ahmadinejad, the only head of state to attend, made a speech condemning Israel as "totally racist"[8] and accusing the West of using the Holocaust as a "pretext" for aggression against Palestinians.[9] The distributed English version of the speech referred to the Holocaust as an "ambiguous and dubious question". When Ahmadinejad began to speak about Israel, all the European Union delegates left the conference room, while a number of the remaining delegates applauded the Iranian President.[10] UN Secretary-General Ban Ki-moon expressed dismay at both the boycotts and the speech.[11]

Durban III, a follow-up conference scheduled for September 2011 in New York, has been boycotted by the ten aforementioned countries (including the Czech Republic), along with Austria, Bulgaria, France and the United Kingdom.

The Durban Review Conference was run by the Bureau of the Preparatory Committee, which was chaired by Ms. Najat Al-Hajjaji of Libya. The eighteen vice-chairpersons hailed from Cameroon, South Africa, Senegal, India, Indonesia, Iran, Pakistan, Argentina, Brazil, Chile, Armenia, Croatia, Estonia, Russia, Belgium, Greece, Norway and Turkey, and the vice-chairman-rapporteur was from Cuba.[12]

According to the UN website, in August 2007 the Preparatory Committee set forth the following objectives for the Durban Review Conference:[13]

141 countries participated in the conference:

The following intergovernmental organizations and other entities were represented: African Union, European Commission Against Racism and Intolerance, Inter-American Development Bank, League of Arab States, The Organization for Security and Co-operation in Europe, Office for Democratic Institutions and Human Rights, Organization of the Islamic Conference.

Also represented: 39 national human rights institutions from Africa, Asia, the Americas, Europe and Oceania, and between 400 and 500 NGOs. 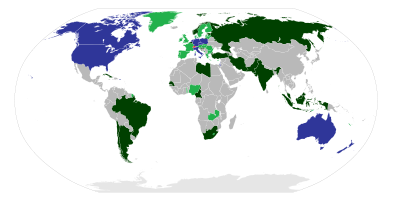 Several countries sent only low level delegations that included no senior government officials. Some of these had originally considered boycotting the conference.

Iranian President Mahmoud Ahmadinejad was the only head of state to attend the conference and hence delivered a speech on its first day. European countries had expressed fears that a commotion in regard to Israel's right to exist and the Holocaust would be raised by Ahmadinejad and some of the other delegates attending the event.[64]

A collection of human rights groups challenged the Iranian leader at the meet, charging that religious discrimination was widespread in Iran, notably affecting Baha'is, Christians, Jews, Sufis, Sunni Muslims, and other minorities, through arbitrary arrests, intimidation and harassment. The human rights groups called on governments taking part in the conference, as well as the media, to hold Ahmadinejad accountable for violations in Iran.[65]

A meeting between Ahmadinejad and Swiss President Hans-Rudolph Merz before the conference created a minor diplomatic row between Switzerland and Israel. Jerusalem recalled its ambassador to Bern "for consultations" in protest at the meet, an Israeli Foreign Ministry official explaining: "We understand the Swiss are obliged to host the conference as part of their UN commitments, we understand that the Iranian President has to be given a visa. What we don't understand is why the Swiss President greeted Ahmadinejad on arrival."[66] Speaking at a state ceremony marking the beginning of Holocaust Remembrance Day, Israeli Prime Minister Benjamin Netanyahu directed a question at the Swiss president, saying "I turn to you, the Swiss president, and ask you: How can you meet someone who denies the Holocaust and wishes for a new holocaust to occur?"[67] In response, the Swiss foreign ministry released a statement saying it "deplores the excessive language used in this context by different Israeli representatives," and summoned the Israeli representative to Bern.[68]

In his opening speech, Ahmadinejad said that the Zionist creation of Israel in the British Mandate of Palestine was accomplished by "military aggressions to make an entire nation homeless under the pretext of Jewish suffering."[69] He said that migrants from around the world descended on Palestine and set up "a totally racist government", and that "in compensation for the dire consequences of racism in Europe, they helped bring to power the most cruel and repressive racist regime in Palestine."[69][70][71]

The speech was disrupted at the start by members of the French Union of Jewish Students as Ahmadinejad opened with a Muslim prayer. The two rainbow-wigged protesters tossed red clown noses at Ahmadinejad and shouted "racist, racist" before being escorted from the room. The protesters said that they had been trying to convey "the masquerade that this conference represents."[11][72]

Within minutes of the speech's opening, dozens of delegates from at least thirty countries, including all the European Union countries in attendance, left the room to return when Ahmadinejad's speech was over. The Czech Republic announced that it would join the boycott of the conference in protest over the speech.[11][69] The BBC described the exit as a "public relations disaster" for the United Nations.[11] Many of those who remained to listen to Ahmadinejad's speech applauded his remarks.[73] The countries whose delegates participated in the walkout were: Austria, Belgium, Bulgaria, Cyprus, the Czech Republic (which left the conference for good), Denmark, Estonia, Finland, France, Greece, Hungary, Ireland, Latvia, Lithuania, Luxembourg, Malta, Portugal, Romania, Slovakia, Slovenia, Spain, Sweden, St. Kitts and Nevis and the United Kingdom.[74]

The English text version of the speech, handed out by the Iranian delegation, stated that after World War II the Allies had created the state of Israel "on the pretext of Jewish sufferings and the ambiguous and dubious question of holocaust."[75] On the following day, the UN revealed that the Iranian president had originally intended to include the phrasing in his speech, rather than "the abuse of the question of the holocaust" he used.[76]

The speech was deplored by UN Secretary-General Ban Ki-moon. Navi Pillay, High Commissioner for Human Rights condemned the speech, but also objected to the walkout. European Union presidency said the remarks were "unacceptable" while European Jewish groups condemned the speech.[77][78] Concern was also expressed that the speech would derail the conference or divert attention from its purposes.[75][79]

Ahmadinejad received a hero's welcome upon his return to Tehran on 21 April,[80] where he was greeted by supporters at the airport with "Death to Israel" slogans.[73][81] The conservative media in Iran hailed Ahmadinejad's speech, while the reformist press focused on the walkout and demonstrations, but without criticizing the president.[73][82] The speech was also supported by Lebanese militant group and government participant Hezbollah[83] and by Gazan ruling group Hamas.[84] On the day of Ahmadinejad's return, the Iranian Foreign Ministry summoned a European Union representative in Tehran to protest what Iran called the EU's "double standard" with regards to racism.[85] On the following day, Iran sent a letter of protest to UN Secretary General Ban Ki-moon for criticizing Ahmadinejad's speech, claiming the Iranian president "was subjected to unfair and unwarranted harsh criticism."[86]

Other events and incidents

A "Durban II counter-conference" was held in New York on the same dates as the conference in Geneva. The counter-conference was sponsored by the American Association of Jewish Lawyers and Jurists and co-sponsored by more than 20 organizations. According to the organizers, the event was held to "address the real issues of racism, racial discrimination, xenophobia and other forms of intolerance which the Durban I and Durban II were officially convened to address; but as happened at Durban I, the Durban II proceedings in Geneva will likely ignore, distort, or misrepresent these issues."[102][103]

Palestinian and anti-Israel NGOs held a parallel meeting to official events, entitled the "Israel Review Conference: 'United Against Apartheid, Colonialism and Occupation, Dignity & Justice for the Palestinian People,'" in a Geneva hotel on 19 April, before the Durban Review Conference had begun.[104] The anti-Israel conference was organized by the International Jewish Anti-Zionist Network, the International Coordinating Network on Palestine and the Boycott, Divestment and Sanctions (BDS) Committee, and was attended by some 160 participants. A related initiative was the "NGO Civil Society Forum March against Racism," attended by Israeli Arab Member of Knesset Jamal Zahalka, who presented himself as a Palestinian victim of "Israeli racist apartheid," and by former UN Human Rights Council Rapporteur on Racism Doudou Diene. Yet another event was the "Civil Society Forum for the Durban Review Conference," in which Diene also spoke.[104][105][106]

In a pre-summit planning meeting, Ashraf Ahmed El-Hojouj, a Palestinian doctor who had been tortured in Libyan prisons after being accused of deliberately infecting children with HIV, announced he was filing a legal complaint to the UN Human Rights Council. "The United Nations should condemn countries that scapegoat, falsely arrest, and torture vulnerable minorities," said Hojouj, who addressed Najjat Al-Hajjaji, the Libyan chairwoman of the proceedings. Hajjaji was reported to have been visibly uncomfortable during the proceedings and interrupted Hojouj three times during his testimony. She then gave Libya the floor to make an objection, and finally cut Hojouj off. Hojouj was slated to testify before the summit on 17 April.[107][108]

The UN expelled from the conference three activist groups for "unacceptable disruptive behavior." The Iranian Neda Institute for Political and Scientific Research was kicked out for distributing inflammatory material to meeting participants, while the Union of Jewish Students of France and the London-based group Coexist were removed for disrupting Ahmadinejad's speech.[109][110] In all, the credentials of 64 representatives from the three groups were revoked. Two journalists representing the conservative magazine and website Townhall were also expelled for disrupting the proceedings after one tried to take over the podium while the other filmed the scene.[111]

On 21 April, the second day of the conference, the delegates agreed on a 143-point declaration to combat racism and discrimination against minorities. The declaration also warned against stereotyping people because of their religion, a key demand of Islamic states who said that Muslims have been unfairly targeted since the 2001 11 September attacks on the United States. In addition, the declaration reaffirmed principles agreed at the 2001 Durban Conference.[112] The document did not include the concept that the defamation of religion is racist and should be banned.[113]

Approval of the declaration was originally scheduled for 24 April. Delegates said that the controversial opening speech by Iranian President Mahmoud Ahmadinejad strengthened their resolve to adopt the declaration as soon as possible, so they advanced the adoption to 21 April.[114] U.N. High Commissioner for Human Rights Navi Pillay described the declaration as an answer to Ahmadinejad's tirade. French Foreign Minister Bernard Kouchner echoed Pillay's comment, saying, "The text was adopted, therefore he [Ahmadinejad] has failed."[75]

Amos Wako, president of the meeting in Geneva, described the 16-page document as a "historic outcome."[73] Navi Pillay called the declaration a "carefully balanced and yet meaningful" final document, which enshrined "a common aspiration to defy racism in all its manifestations and work to stamp it out wherever it may occur."[115]