Blasphemy is irreverence towards religious or holy persons or things.[1] Some countries have laws to punish blasphemy,[2] while others have laws to give recourse to those who are offended by blasphemy. Those laws may discourage blasphemy as a matter of blasphemous libel,[3] vilification of religion,[4][5] religious insult,[6] or hate speech.[7]

In some countries with a state religion blasphemy is outlawed under the criminal code. It has been claimed[10] that such laws can be used to victimize non-members of, and dissident members of, the state religion. 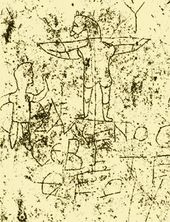 The satirical Alexamenos graffito is believed to be the earliest known representation of Jesus.

Christian theology condemns blasphemy. It is spoken of in Mark 3:29, where blaspheming the Holy Spirit is spoken of as unforgivable—the eternal sin. However, there is dispute over what form this blasphemy may take and whether it qualifies as blasphemy in the conventional sense.

Blasphemy has been condemned as a serious, or even the most serious, sin by the major creeds and Church theologians.

Catholic prayers and reparations for blasphemy

In the Catholic Church, there are specific prayers and devotions as Acts of Reparation for blasphemy.[17] For instance, The Golden Arrow Holy Face Devotion (Prayer) first introduced by Sister Marie of St Peter in 1844 is recited "in a spirit of reparation for blasphemy". This devotion (started by Sister Marie and then promoted by the Venerable Leo Dupont) was approved by Pope Leo XIII in 1885.[18] The Raccolta Catholic prayer book includes a number of such prayers.[19] The Five First Saturdays devotions are done with the intention in the heart of making reparation to the Blessed Mother for blasphemies against her, her name and her holy initiatives. 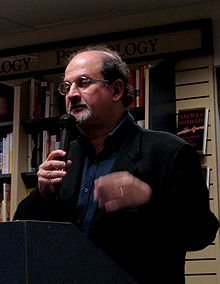 Writer Salman Rushdie was accused of blasphemy and subject of a fatwā issued by Ayatollah Ruhollah Khomeini, the Supreme Leader of Iran, in February 1989.

In Britain's last blasphemy execution, 20-year-old Thomas Aikenhead was executed for the crime in 1697. He was prosecuted for denying the veracity of the Old Testament and the legitimacy of Christ's miracles. In recent years, George Rosie wrote in the newspaper The Scotsman that "The killing of Thomas Aikenhead, like the hounding of Salman Rushdie for the same 'offence,' was a disgrace…a prime example of a God-fixated state killing a man in an attempt to stop the spread of an idea."[21]

The Quran and the hadith do not mention blasphemy.[22] According to Pakistani religious scholar, Javed Ahmed Ghamidi, nothing in Islam supports blasphemy law.[23] Rather, Muslim jurists made the offense part of Sharia; the penalties for blasphemy can include fines, imprisonment, flogging, amputation, hanging, or beheading.[24] Muslim clerics may call for the punishment of an alleged blasphemer by issuing a fatwa.[25]

In the third book of the Torah, Leviticus 24:16 states that he that blasphemes the name of the Lord "shall surely be put to death". See also List of capital crimes in the Torah. The Seven laws of Noah, which Judaism sees as applicable to all people, prohibit blasphemy.

In the early 21st century, blasphemy became an issue for the United Nations. The General Assembly passed several resolutions which called upon the world to take action against the "defamation of religions."[26]

Blasphemy has been used to mean "irreverence" in a non-religious context. Sir Francis Bacon uses "blasphemy" in this way in Advancement of Learning, where he speaks of "blasphemy against teaching".

"Blasphemy" may be used as a substitute for "profanity" or "cursing" as it is used in this sentence: "With much hammering and blasphemy, the locomotive's replacement spring was finally fitted."

In contemporary language, the notion of blasphemy is often used hyperbolically. This usage has garnered some interest among linguists recently, and the word 'blasphemy' is a common case used for illustrative purposes.[27][28]