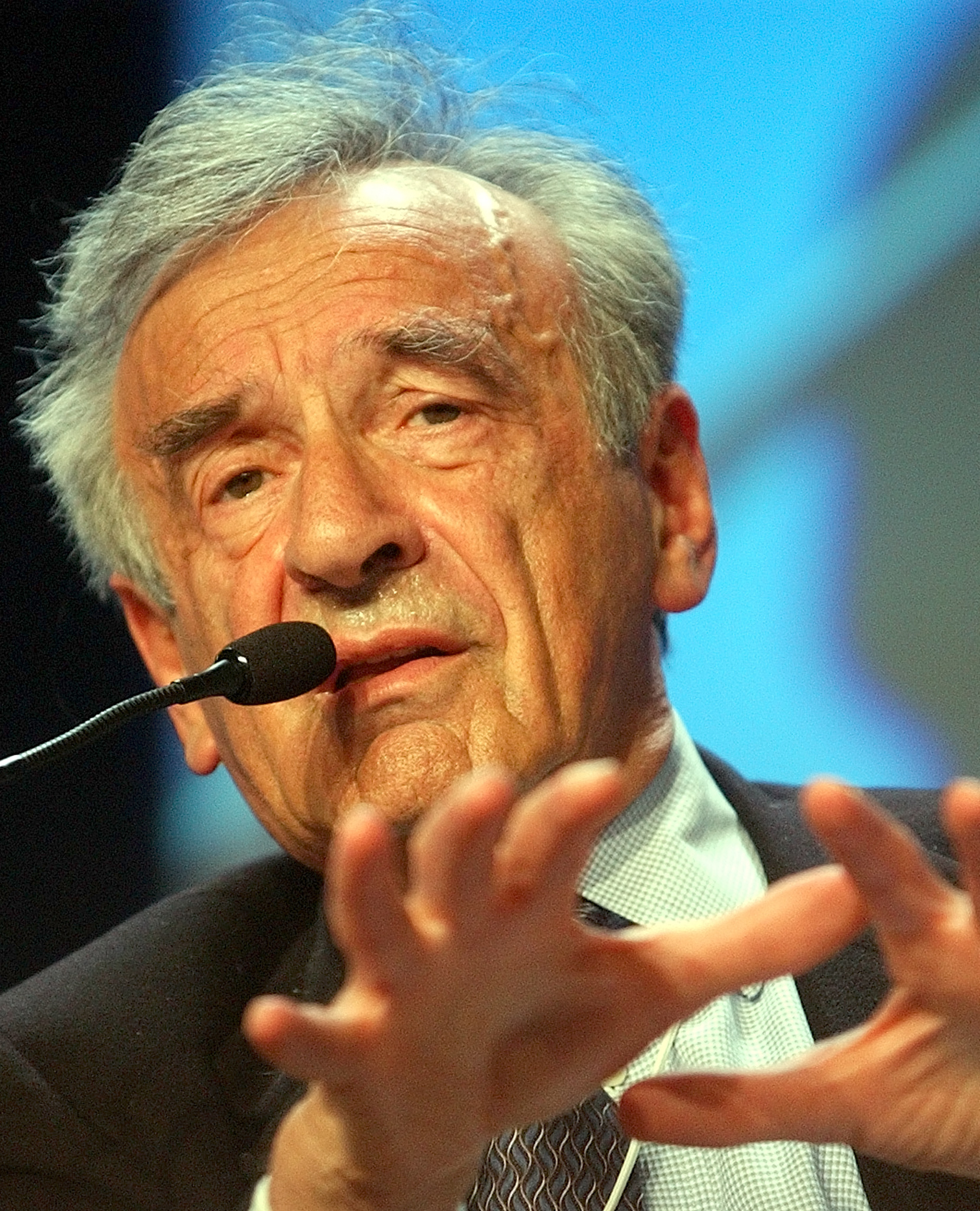 Elie Wiesel (born Eliezer Wiesel on September 30, 1928 [ [http://www.britannica.com/eb/article-9076939/Elie-Wiesel Elie Wiesel from Encyclopædia Britannica] ] , in , ) is a writer, professor, political activist, and survivor. He is the author of 57 books, the best known of which is "Night", a memoir that describes his experiences during the Holocaust and his imprisonment in several .

Wiesel was awarded the in 1986. The called him a "messenger to mankind", noting that through his struggle to come to terms with "his own personal experience of total humiliation and of the utter contempt for humanity shown in 's death camps," as well as his "practical work in the cause of peace," "Wiesel has delivered a powerful message "of peace, atonement and human dignity" to humanity. [ [http://nobelprize.org/peace/laureates/1986/press.html 1986 Nobel Peace Prize Press Release] ]

Wiesel was born in Sighet, (now ), Maramureş, , to Shlomo and Sarah Wiesel. Sarah was the daughter of Dodye Feig, a Hasid and farmer from a nearby village. Shlomo was an Orthodox Jew of Hungarian descent, and a shopkeeper who ran his own grocery store. He was active and trusted within the community,and had spent a few months in jail for having helped Polish Jews who escape, and was hungry in the early years of his life. It was Shlomo who instilled a strong sense of in his son, encouraging him to learn Modern Hebrew and to read literature, whereas his mother encouraged him to study and . Wiesel has said his father represented reason, and his mother, faith (Fine 1982:4). Elie Wiesel had three sisters: Hilda and Beatrice (Bea), who were older than he, and Tzipora, who was the youngest in the family. Bea and Hilda also survived the war and eventually emigrated to North America; in Bea's case, to Montréal, Canada.

The town of Sighet was returned to Hungary. In 1944 Elie, his family and the rest of the town were placed in one of the two ghettos in Sighet. Elie and his family lived in the larger of the two, on Serpent Street. On May 16, 1944, the Hungarian authorities ed the Jewish community in Sighet to Auschwitz – Birkenau. While at Auschwitz, the number A-7713 was tattooed onto his left arm. Wiesel was separated from his mother and sister Tzipora, who are presumed to have been murdered at Auschwitz. Wiesel and his father were sent to the attached work camp Buna-Werke, a subcamp of Auschwitz III Monowitz. He managed to remain with his father for a year as they were forced to work under appalling conditions and shuffled between concentration camps in the closing days of the war. On January 29, 1945, just a few weeks after the two were marched to , Wiesel's father suffered from , , and , and was later sent to the crematory, only months before the camp was liberated by the American Third Army on April 11. [see the film "Elie Wiesel Goes Home" by Judit Elek, narrated by William Hurt ISBN #1-930545-63-0]

After the war, Wiesel was placed in a French , where he learned the and was reunited with both his older sisters, Hilda and Bea, who had also survived the war. In 1948 he studied philosophy at the Sorbonne.

He taught Hebrew and worked as a choirmaster before becoming a professional journalist. He wrote for Israeli and French newspapers, including "" (in Yiddish) and the French Jewish Magazine, "". However, for ten years after the war, Wiesel refused to write about or discuss his experiences during the Holocaust. Like many survivors, Wiesel could not find the words to describe his experiences. However, a meeting with , the 1952 Nobel Laureate in Literature, who eventually became Wiesel's close friend, persuaded him to write about his Holocaust experiences.

Wiesel first wrote the 245-page memoir "Un di velt hot geshvign" (And the World Remained Silent), in , which was published in abridged form in . [ Naomi Seidman, "Elie Wiesel and the Scandal of Jewish Rage," Jewish Social Studies 3:1 (Fall 1996), p. 5. ] Wiesel rewrote a shortened version of the manuscript in French, and it was published as the 127-page autobiography "La Nuit", and later translated into English as "Night." Even with Mauriac's support, Wiesel had trouble finding a for his book, and initially it sold few copies.In 1960, Arthur Wang of Hill & Wang agreed to pay a $100 pro-forma advance, and published it in the U.S. in September that year as Night. It sold just 1,046 copies over the next 18 months, but attracted interest from reviewers, leading to television interviews with Wiesel and meetings with literary figures like Saul Bellow. "The English translation came out in 1960, and the first printing was 3,000 copies," Wiesel said in an interview. "And it took three years to sell them. Now, I get 100 letters a month from children about the book. And there are many, many million copies in print."

By 1997, Night was selling 300,000 copies annually in the United States; by March 2006, it had sold six million copies there, and had been translated into 30 languages. On January 16, 2006, Oprah Winfrey chose the novel for her book club. One million extra paperback and 150,000 hardcover copies were printed carrying the "Oprah's Book Club" logo, with a new translation by Wiesel's wife, Marion, and a new preface by Wiesel. On February 13, 2006, Night was no. 1 in The New York Times bestseller list for paperback non-fiction.

Life in the United States

In 1955, Wiesel moved to , having become a U.S. citizen: due to injuries suffered in a traffic accident, he was forced to stay in New York past his visa's expiration and was offered citizenship to resolve his status. In the U.S., Wiesel wrote over forty books, both fiction and non-fiction, and won many literary prizes. Wiesel's writing is considered among the most important in Holocaust literature. Some historians credit Wiesel with giving the term 'Holocaust' its present meaning, but he does not feel that the word adequately describes the event and wishes it were used less frequently to describe significant occurrences as everyday tragedies (Wiesel:1999, 18).

He was awarded the in 1986 for speaking out against , , and . He has received many other prizes and honors for his work, including the in 1985, and was elected to the in 1996. He is also the recipient of The International Center in New York's Award of Excellence. Wiesel has published two volumes of his . The first, "All Rivers Run to the Sea", was published in 1994 and covered his life up to the year 1969 while the second, titled "And the Sea is Never Full" and published in 1999, covered 1969 to 1999.

Wiesel and his wife, Marion, started the Elie Wiesel Foundation for Humanity. He served as chairman for the (later renamed ) from 1978 to 1986, spearheading the building of the in .

Wiesel is particularly fond of teaching and holds the position of Professor of the at . From 1972 to 1976, Wiesel was a Distinguished Professor at the and member of the . In 1982 he served as the first Visiting Scholar in Humanities and Social Thought at . He also co-instructs Winter Term (January) courses at , . From 1997 to 1999 he was Ingeborg Rennert Visiting Professor of at .

Wiesel has become a popular speaker on the subject of the Holocaust. As a , he has advocated for many causes, including , the plight of Soviet and Ethiopian Jews, the victims of "" in , 's "", Bosnian victims of in the former , 's Miskito Indians, and the . He recently voiced support for intervention in , Sudan.

Wiesel is the honorary chair of the Camp Miriam Campership and Building Fund, and a member of the International Council of the New York-based .

On March 27, 2001, Wiesel appeared at the for Jewish Awareness Month and was presented with an honorary doctor of humane letters degree from the University of Florida by Dr. Charles Young. [ [http://www.alligator.org/edit/issues/01-spring/010323/b13wiesel23.htm Independent Florida Alligator article , 2001] ]

In 2008 Wiesel gave the convocation speech at . The money paid for his appearance covered costs of travel and the rest went to his various charitable institutions.

In September 2006, he appeared before the with actor to call attention to the humanitarian crisis in .

On November 30, 2006 Wiesel received an honorary knighthood in London in recognition of his work toward raising Holocaust education in the United Kingdom. [ [http://www.totallyjewish.com/news/national/?content_id=4994 "Wiesel Receives Honorary Knighthood" ~ TotallyJewish.com] ]

On April 25, 2007, Wiesel was awarded an honorary doctorate of humane letters degree from the .

During the early 2007 selection process for the candidate for President of , Prime Minister reportedly offered Wiesel the nomination (and, as the ruling-party candidate and an apolitical figure, likely the Presidency), but Wiesel "was not very interested". [ [http://www.jpost.com/servlet/Satellite?cid=1159193468801&pagename=JPost%2FJPArticle%2FShowFull Olmert backs Peres as next president] Jerusalem Post, 18 October 2006] was chosen as the Kadima candidate (and later President) instead.

On April 9, 2008, Wiesel was presented with an Honorary Degree, Doctor of Letters at the City College of New York.

On February 1, 2007, Wiesel was attacked in a hotel by a twenty-two year old holocaust denier named Eric Hunt who tried to drag Wiesel into a hotel room. Wiesel was not injured and Hunt fled the scene. Later, Hunt bragged about the incident on a holocaust denial website. Approximately one month later, he was arrested and charged with multiple offenses. [ [http://www.msnbc.msn.com/id/17193352/ "Suspect named in Wiesel attack"] , "MSNBC, February 16, 2007.]

In a scathing editorial in , called Wiesel a "contemptible poseur and windbag [.] " Hitchens contrasted Wiesel's past support for the Palestinian Jewish militant group in the 1940s with his claimed neutrality on Middle East politics, condemned his historically questionable views on the , and deplored Wiesel's reaction to the of Palestinians.

I support Israel—period. I identify with Israel—period. I never attack, never criticize Israel when I am not in Israel. [Chomsky cites "Interview, " [http://jewishpostopinion.com Jewish Post & Opinion,] " Nov. 19, 1982."]

Chomsky interprets Wiesel's "sadness" after the Sabra-Shatila massacre as concern for Israel's image, rather than for its victims, and does not accept Wiesel's defense that "after all the Israeli soldiers did not kill [the Palestinians,] " adding that Israeli troops participated in much killing in their own right, and concluding that Wiesel must view Israel as "basically exempt from criticism".

Former DePaul University professor has stated that Wiesel is a "resident clown of the Holocaust circus" and "a ridiculous character." [http://www.normanfinkelstein.com/article.php?pg=11&ar=111] He has also accused Wiesel of personally profiting from the Holocaust while downplaying the significance of other genocides in history for his own enrichment.

In a radio interview several years prior to his well-publicized tenure-denial case, Finkelstein accused Wiesel of cheapening the significance of the Nazi Holocaust by asserting its uniqueness. Finkelstein complained that Wiesel had allegedly earned speaking fees of as high as $25,000 yet impeded learning by allegedly not comparing the Holocaust to other massacres:

Elie Wiesel is always wheeled out, and with his long face and anguished heart and cinematic eyes, he always says: "Oh, do not compare." I beg your pardon, I think you should compare. Otherwise, if you don't want to compare, what's the point of it? What are you going to learn from it? [Focus 580: [http://www.will.uiuc.edu/media/focus041005a.mp3 The Holocaust Industry] (mp3 radio interview.) WILL-AM. October 4, 2004. Passage begins @ 17:45]

Finkelstein's book has a section attacking what he calls the "uniqueness doctrine," which he attributes to Wiesel and to a putative "Holocaust Industry." Finkelstein alleges that Wiesel is a leader of the "Holocaust Industry" as he has allegedly refused to satisfactorily criticize Israel for the and, according to Finkelstein, is plotting to diminish the importance of the genocides of communists, non-National socialists, the , homosexuals and the handicapped by the National Socialists and the Turks genocide of the Armenians (Finkelstein [Norman G. Finkelstein: "The Holocaust Industry", Second Edition, Verso, 2003, p. 53] ) as well as other genocides [http://www.slate.com/id/3143/] and allegedly deploring African-American "ingratitude" to Jews.

*"" &ndash; A documentary about the orphanage in which he stayed after the Holocaust
*"" &ndash; A 2008 joint / dramatisation of his book "The Trial of God", about a group of Auschwitz prisoners who place God on trial for breaching his contract with the Jewish people.