As well as providing coach hire, Damory provides a number of bus services in Dorset, linking up rural communities and providing an important service to residents.

Damory was notable in being one of the last remaining bus operators to run Bristol VRs in daily service until 2009 when the influx of ex Southern Vectis Olympians finally pushed them out. 3 VR's were retained but used for the GSC Events Fleet (inc. Glastonbury,IOW Festival,Bestival),[1] with a number of vehicles being transferred from Wilts & Dorset a few years ago. Damory also operate a number of other unusual vehicles, as noted below.

Damory was established originally by Vic Kimber in the early 1970s in Blandford, where it is still based. It took over the rural bus routes of the Blandford Bus Company, Oakfield Travel and Stanbridge & Crichel Bus Company. Subsequently it became part of the Go-Ahead Group in 2003 and immediately became an operating subsidiary of Wilts & Dorset. After Go-Ahead bought Southern Vectis and Solent Blue Line in late 2005, Damory (along with Wilts & Dorset), was put in the new Go South Coast division.[2]

There are two different uses for Damory's coaches. Coaches can be hired privately for a number of uses, with varying members of the fleet available.[3] Damory also offer a number of excursions, with a tour brochure released each year.[4][5]

Damory operates a number of rural bus services in Dorset, these being the only services in many areas. It is of note that Damory does not compete against Wilts & Dorset to win tenders.[3] The following services are currently operated:[6] 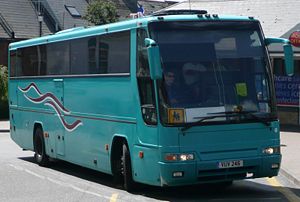 A vehicle illustrating the Damory coach livery. Usually, vehicles have large "Damory" names adjacent to the waves: however, when this vehicle was photographed, they had been removed following transfer to Southern Vectis. This vehicle is a Volvo Palatine Coach 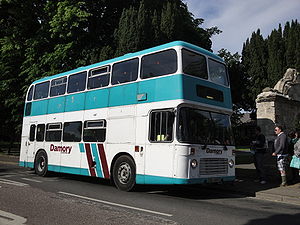 One of Damory's Bristol VRs still in the fleet only used for special events within the GSC region.

Damory was well known for its fleet of Bristol VRs: however, they no longer run any of the type, all examples having been replaced by Leyland Olympians transferred from Southern Vectis. Other notable vehicles include DAF SB220/Ikarus Citibus (480), some LDV Convoy and two Volvo B10B/Northern Counties Paladin. A Scania/Darwen Olympus arrived in mid-2008.

Fleet details are as follows:[1]