"Silverbeet" redirects here. For the album by The Bats, see Silverbeet (album).

Chard (Beta vulgaris subsp. cicla),[1] is a leafy green vegetable often used in Mediterranean cooking. While the leaves are always green, chard stalks vary in color. [3] Chard has been bred to have highly nutrious leaves at the expense of the root (which is not as nutrious as the leaves). [4] Chard is, in fact, considered to be one of the healthiest vegetables available and a valuable addition to a healthy diet (not unlike other green leafy vegetables). [5] Chard has been around for centuries, however because of its similarity to beets is difficult to determine the exact evolution of the different varieties of chard [6]

Chard and the other beets are chenopods, a group which is either its own family Chenopodiaceae or a subfamily within the Amaranthaceae. Although the leaves are eaten, it is in the same group and subfamily as beetroot (garden beet), which is usually grown primarily for its edible roots. Chard is also known by its many common names such as Swiss chard,[7] silverbeet, perpetual spinach, spinach beet, crab beet, bright lights (due to the bright and vivid spring colors when they are cooked or provided as a medley of vegetables), seakale beet, and mangold and is one of the cultivated descendants of the sea beet, Beta vulgaris subsp. maritima.[8]

The word "Swiss" was used to distinguish chard from French spinach varieties by 19th century seed catalog publishers. The chard is very popular among Mediterranean cooks. The first varieties have been traced back to Sicily.

Chard can be harvested while the leaves are young and tender, or after maturity, when they are larger and have slightly tougher stems. Raw chard is extremely perishable.

Chard has shiny, green, ribbed leaves, with stems that range from white to yellow to red, depending on the cultivar. It has a slightly bitter taste. Fresh young chard can be used raw in salads. Mature chard leaves and stalks are typically cooked (like in pizzoccheri) or sauteed; their bitterness fades with cooking, leaving a refined flavor which is more delicate than that of cooked spinach. 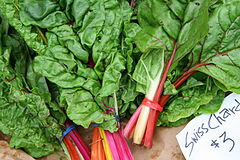 Swiss chard on sale at an outdoor market

Cultivars of chard include green forms, such as 'Lucullus' and 'Fordhook Giant', as well as red-ribbed forms such as 'Ruby Chard' and 'Rhubarb Chard'.[8] The red-ribbed forms are very attractive in the garden, but as a rough general rule, the older green forms will tend to out-produce the colorful hybrids. 'Rainbow Chard' is a mix of other colored varieties that is often mistaken for a variety unto itself.

Chard is used in a variety of cultures around the world, including Arab cuisine.

All parts of the chard plant contain oxalic acid. 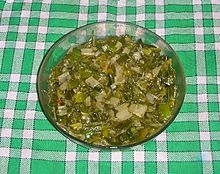 Chard sauteed with garlic and leeks