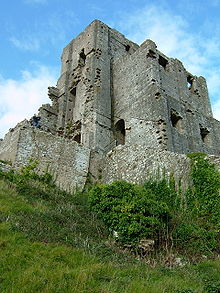 Ruins of Corfe Castle keep from below

Corfe Castle is a fortification in the English county of Dorset. It stands above the village of the same name. The castle dates back to the 11th century, and commands a gap in the Purbeck Hills on the route between Wareham and Swanage. The majority of the road traffic to and from the Swanage area passes below the battlements of the castle.

The oldest surviving structure on the castle site dates to the 11th century, although evidence exists of some form of stronghold predating the Norman Conquest. Edward the Martyr was assassinated at the site on 18 March 978.

The Domesday Book records one castle in Dorset; the entry, which reads "Of the manor of Kingston the King has one hide on which he built Wareham castle", is thought to refer to Corfe rather than the timber castle at Wareham.[1] There are 48 castles directly mentioned in the Domesday Book, although not all those in existence at the time were recorded.[2] Assuming that Corfe is the castle in question, it is one of four the Domesday Book attributes to William the Conqueror; the survey explicitly mentions seven people as having built castles, of which William is the most prolific.[3] One of the secondary roles of castles was to act as a storage facility as demonstrated by Corfe Castle; in 1224 Henry III sent to Corfe for 15,000 crossbow bolts to be used in the siege of Bedford Castle.[4]

Construction of a stone hall and inner bailey wall occurred in the 11th century and extensive construction of other towers, halls and walls occurred during the reigns of Henry I, John and Henry III. By the 13th century the castle was being used as a royal treasure storehouse and prison. Refortified in 1202–1204, the west bailey at Corfe Castle resembles the bailey of Château Gaillard, built by Richard the Lionheart in 1198.[5] King John used the castle to keep his most important prisoners, among them were: his niece Eleanor of Brittany, elder sister of the murdered prince Arthur and thus the rightful heiress to England; Princesses Margaret and Isobel, daughters of King William I of Scotland sent as hostages. In 1210, after she angered King John, Maud de Braose and her eldest son William were walled alive inside the castle dungeon, where they both starved to death.

In December 1460, during the Wars of the Roses Edmund Beaufort and his army marched from the castle destined for the Battle of Wakefield. During the march the army split at Exeter so the cavalry could reach the north quicker and on 16 December 1460 some of his men became embroiled in the Battle of Worksop, Nottinghamshire. Beaufort and the Lancastrians won the skirmish.

The castle remained a royal fortress until sold by Elizabeth I in the 16th century to her Lord Chancellor, Sir Christopher Hatton.

The first siege, in 1643, lasted for six weeks before the Parliamentarians withdrew with the loss of 100 men. The second siege, in 1646, was resisted for two months before the castle was betrayed by a member of the garrison. After its capture, the castle was slighted with some explosives and mainly by undermining to ensure that it could never stand again as a Royalist stronghold. In the centuries that followed, the local populace took advantage of this easy source of building material and masonry; door frames and other items originally from the castle can be seen in a number of nearby houses.

After the restoration of the monarchy in 1660, the Bankes family regained their properties. Rather than rebuild or replace the ruined castle they chose to build a new house at Kingston Lacy on their other Dorset estate near Wimborne Minster.

Corfe castle is considered to be the inspiration for Enid Blyton's Kirrin Island,[6] which had its own similar castle.

360° Panorama of Corfe Castle, Dorset, as seen on an overcast October afternoon, 2009

Corfe Castle is on a hill overlooking a village 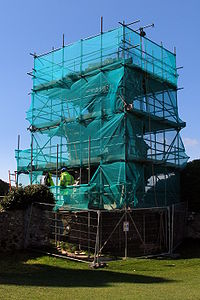 Corfe Castle with scafolding as part of the maintenance project

In the 1980s, Ralph Bankes bequeathed the entire Bankes estate to the National Trust, including Corfe Castle, much of the village of Corfe, the family home at Kingston Lacy, and substantial property and land holdings elsewhere in the area. The castle is open to the public, receiving 168,377 visitors in 2004, and is a grade I listed building. In the summer 2006, the dangerous condition of the keep caused it to be closed to visitors, who could only visit the walls and inner bailey. The National Trust undertook an extensive conservation project on the castle, and the keep was re-opened to visitors in 2008, with the work completed in 2009.[7][8]

During the restoration work, an "appearance" door was found in the keep, designed for Henry I of England.[9] The National Trust claims that this indicates that the castle would have been one of the most important in England at the time.[10]

In 2006, Corfe Castle was the National Trust's tenth most-visited historic house with 173,829 visitors[11] according to figures released by the Association of Leading Visitor Attractions, the number of visitors in 2010 had risen to nearly 190,000.[12]