/ˈnʌfiːld/) is one of the constituent colleges of the University of Oxford in England. It is an all-graduate college and primarily a research establishment, specialising in the social sciences, particularly economics, politics and sociology. It is a research centre in the social sciences. Despite being one of the newest and smallest of the colleges, its architecture is designed to conform to the traditional college layout, and its modernist spire is a landmark for those approaching Oxford from the west.

Nuffield College is a graduate college of the University of Oxford specialising in the social sciences, particularly economics, politics, and sociology. It aims to provide a stimulating research-oriented environment for postgraduate students (about 75 in number) and faculty (approximately 60 academic fellows). The college, which was founded in 1937, is located on a site on the western side of Oxford city centre. The land on which the college stands, which was formerly the city's principal canal basin and coal wharfs, was donated to the university by William Morris, 1st Viscount Nuffield (Lord Nuffield). Restrictions on construction after the Second World War meant that work on the college was not completed until 1960. 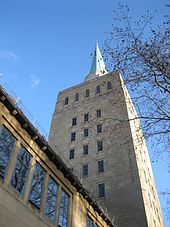 The library tower and spire seen from New Road.

The original plan for the college to occupy land on both sides of Worcester Street was scaled down as a result of budget and material shortages, and to this day the land to the west of the college is occupied by a "temporary" car park. The college buildings were designed by Austen Harrison, whose plans were approved by Lord Nuffield in 1940. Construction of the college began in 1949, and was completed in 1960. The architectural aesthetic of the final design, particularly the tower and its fleche (small spire), has attracted some criticism; unlike the other "dreaming spires" of Oxford, Nuffield's tower is a masonry-clad steel-framed book-stack, housing the college library.

Around a third of Nuffield's fellows hold appointments at the University of Oxford as lecturers, readers or professors. In addition, the college fully funds around a dozen Official Fellowships, which the College views as tenured research professorships (although most also teach on the University's graduate programme), and about a dozen three year post-doctoral research fellows. The college also houses a number of young scholars who hold distinguished awards, such as British Academy post-doctoral fellowships, some senior research fellows and a group of research-active emeritus and honorary fellows.

The college has been the source of some of the major research developments in social science. These include the British Election Studies and the major programme of research on Social Mobility in Britain. It was the birthplace of the "Oxford School" of Industrial Relations; it pioneered the development of cost benefit analysis for developing countries; and it has made a major contribution to the methodology of econometrics.