The college was originally founded in 1838 as Spring Hill College, Birmingham, a college for Nonconformist students.[1] In the late nineteenth century, although students from all religious denominations were legally entitled to attend universities, they were forbidden by statute from taking degrees unless they conformed to the Church of England. 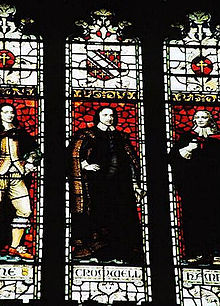 In 1871, the Universities Tests Act abolished all religious tests for non-theological degrees at Oxford, Cambridge and Durham Universities.[2] For the first time the educational and social opportunities offered by Britain's premier institutions were open to all Nonconformists. The Prime Minister who enacted these reforms, William Ewart Gladstone, encouraged the creation of a Nonconformist college at Oxford.

Spring Hill College moved to Oxford in 1886 and was renamed Mansfield College after its greatest donors, George and Elizabeth Mansfield. It was the first Nonconformist college to open in Oxford. Initially the college accepted male students only, the first woman being admitted in 1913. The magnificent Victorian buildings, designed by Basil Champneys, were completed in 1889. In 1955, the college was granted the status of Permanent Private Hall within the University of Oxford and in 1995 a Royal Charter was awarded giving the institution full college status.

Since the college was first formally integrated into the University structure in 1955, its Nonconformist aspects have gradually diminished. Until 2007, the United Reformed Church (URC) sponsored a course at Mansfield for training ordinands. These students became fully matriculated members of the University and received degrees. Mansfield no longer trains URC ordinands.[3]

The Nonconformist history of the college is however still apparent in a few of its features. A portrait of Oliver Cromwell hangs in the Senior Common Room and portraits of the 1662 dissenters hang in the library and the corridors of the main college building, together with portraits of Viscount Saye and Sele, John Hampden, Thomas Jollie and Hugh Peters.

One place where the Nonconformist history of the institution is still very much apparent is in the college chapel. It is a non-consecrated space and contains a unique selection of stained glass windows and statues depicting leading figures from Nonconformist movements, including Cromwell, Sir Henry Vane and William Penn among many others. In 1940, whilst he was a lecturer at University College, future British Prime Minister Harold Wilson married Mary Baldwin in this chapel, although he was not a member of the college. Chapel services are still conducted in a Nonconformist tradition and the college chaplain is always from a Nonconformist denomination. Nevertheless, over the years attendance at chapel services has declined and the make-up of the general student body no longer reflects the Nonconformist religious origins of the college.

Because of its Nonconformist roots, the college still has many strong links with American schools. It has a long established tradition of accepting roughly 30 "Junior Year Abroad" students from the USA every year. These students come to study in Oxford for one academic year and have full access to its libraries and their designated tutors. 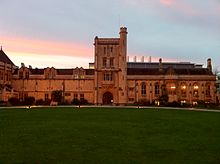 The main building of Mansfield College. The Department of Chemistry can be seen in the background.

The grounds of Mansfield College are located on Mansfield Road, near the centre of Oxford. The grounds are near the University parks and the River Cherwell. The college shares a boundary wall with Wadham College.

The main building was designed by architect Basil Champneys, and built between 1887-1890. It houses the main college library, the law library and the theology library. It is also home to the college's Junior Common Room, Middle Common Room, and Senior Common Room. The main college building encloses 3 sides of the large quadrangle, which has a circular lawn. The college also has several other buildings, primarily used for student accommodation, which are opposite the main building.

Dr Albert Schweitzer, theologian and famous Bach expert was a special lecturer at Mansfield and often performed on the chapel organ. Among the notable academic staff are the Reverend Dr John Muddiman, G. B. Caird Fellow in New Testament Theology, and Michael Freeden, director of the Centre for Political Ideologies and founding editor of the Journal of Political Ideologies. Dame Jocelyn Bell Burnell DBE FRS, the British astrophysicist known for first discovering radio pulsars, is currently[when?] a visiting professor. Honorary fellows of the College include Jimmy Carter, 39th President of the USA, Shami Chakrabarti CBE, Director of the civil rights group Liberty and Chancellor of Oxford Brookes University, Will Hutton, prominent journalist, economist and head of the Work Foundation, and The Rt. Hon. The Lord Ashdown of Norton-sub-Hamdon GCMG KBE (Paddy Ashdown), diplomat and politician.

Mansfield College Boat Club and a number of other college organisations are popular amongst the students, achieving results at the level of, or competitive with, the larger colleges. Many of the sports teams are "combined" in partnership with Merton College.

As of the start of 2011, the 1st XI football team play in the JCR Premier League, the 1st XV rugby team in the JCR 3rd division and the 1st XI cricket team in the Premier Division. The netball team is currently in the 2nd division. Recently, the college has enjoyed significant sporting success: winning the 2010/11 JCR football Premier League, 2011 rugby Cuppers Bowl and achieving 4 consecutive promotions in college netball. The cricket team is also a dominant force in the JCR leagues, with numerous Cuppers and League titles in the past five years.

Like many of the constituent colleges of Oxford University, Mansfield holds a ball once every three years. The last ball took place on 7 November 2009 and was themed 'Circus of the Macabre'.

"Almighty God, Father of mercies and fount of every good, in the enjoyment of thy gifts we bless thy name, through Jesus Christ our Lord."

The college's pre-supper grace was translated into Latin from the Welsh originally prepared for the University College of North Wales. It was adopted at Mansfield in 1953 and set to music in 1986.[11]

The retired porter Hugh Flint was the drummer for John Mayall & the Bluesbreakers and appeared on their first two albums, the second of which featured Eric Clapton. He later formed the band McGuinness Flint.