St John's College is a constituent college of the University of Oxford, one of the larger Oxford colleges with approximately 390 undergraduates, 200 postgraduates and over 100 academic staff.[1] It was founded by Sir Thomas White, a merchant, in 1555, whose heart is buried in the chapel of the College. St. John's is reputed to be the wealthiest in Oxford, with an estimated financial endowment of £304 million as of 2006,[2] and its undergraduate finals results regularly place it at or near the top of the University's Norrington Table, in which it currently ranks 4th.[3]

On 1 May 1555, Sir Thomas White, lately Lord Mayor of London, obtained a Royal Patent of Foundation to create an eleemosynary institution for the education of students within the University of Oxford. White, a Roman Catholic, originally intended St John's to provide a source of educated Roman Catholic clerics to support the Counter-Reformation under Queen Mary, and indeed Edmund Campion, the Roman Catholic martyr, studied here.

White acquired buildings on the east side of St Giles', north of Balliol and Trinity Colleges, which had belonged to the former College of St Bernard, a monastery and house of study of the Cistercian order that had been closed during the Dissolution of the Monasteries. Initially the new St John's College was rather small and not well endowed financially. During the reign of Elizabeth I the fellows lectured in rhetoric, Greek, and dialectic, but not directly in theology. However, St John's initially had a strong focus on the creation of a proficient and educated priesthood.[4]

White was Master of the Merchant Taylors' Company, and established a number of educational foundations, including the Merchant Taylors' School. Although the College was closely linked to such institutions for many centuries, it became a more open society in the later 19th century. (Closed scholarships for students from the Merchant Taylors' School, however, persisted until the late 20th century.) The endowments which St John's was given at its foundation, and during the twenty or so years afterward, served it very well and in the second half of the nineteenth century it benefited, as ground landlord, from the suburban development of the city of Oxford and was unusual among Colleges for the size and extent of its property within the city.

Although primarily a producer of Anglican clergymen in the earlier periods of its history, St John's also gained a reputation for both law and medicine. Fellows and alumni have included Archbishop William Laud, Jane Austen's father and brothers, the early Fabian intellectual Sidney Ball, who was very influential in the creation of the Workers' Educational Association (WEA), Rushanara Ali, Labour Politician and one of the first Bangladeshis to gain a PPE degree at St. John's College and more recently, Tony Blair, former prime minister of the United Kingdom.

The patronage of the parish of St Giles was included in the endowment of the college by Thomas White. Vicars of St Giles were formerly either Fellows of the College, or ex-Fellows who were granted the living on marriage (when Oxford fellows were required to be unmarried). The College retains the right to present candidates for the benefice to the bishop.[5]

The St John's College Boat Club is the largest college society; everybody is encouraged to try out the sport. In Summer Eights 2011, six SJCBC boats qualified for the racing, and both the Women's and Men's First Boat Won "Blades" (bumping the boat in front on each day of racing), making SJCBC one of the most successful boathouses on the river.

St John's used to be the home of two dining societies, the King Charles Club ("KCC") and the Archery Club. Tony Blair has been pictured at a gathering of the latter in the St John's gardens.[7]In recent years these societies have become largely defunct although are still celebrated by former members.

The college also has an active drama group, who operate under the banner of St. John's Mummers. They produce one performance per term, ranging from modern "in-yer-face" to Shakespearean garden plays. In 2010 they performed an adaptation of Alfred Jarry's Ubu Roi, called "Ubu" at the Edinburgh Festival Fringe under the name "Awful Pie Theatre."

SASJO (the St John's and St Anne's Orchestra) both performs (every term) and rehearses in the St John's Auditorium. The orchestra is non-audition and open to all University of Oxford students, regardless of college.[8] 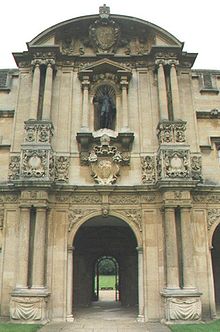 Canterbury Quad, St John's College, Oxford : The entrance to the Great Lawn and Groves, which were not, despite popular legend, landscaped by Capability Brown

Most of the college buildings are organized around seven quadrangles (quads):

Other buildings on the site include the Holmes Building (a south spur off the Canterbury Quad, containing fellows' rooms), and Middleton Hall, a curious house, north of the North Quad and abutting the Lamb and Flag, which has a stone frontage in early 19th-century style, though the back part is in Victorian red brick and contains a Jacobean staircase (perhaps originally from another building).

In addition, the College accommodates a number of students, traditionally second-year undergraduates but nowadays also a significant number of final year undergraduates and graduate students, in the houses owned by the college on Museum Road and Blackhall Road. These houses back onto Kendrew Quadrangle, completed in October 2010, named after Sir John Kendrew, former President of the College, Nobel Laureate and the College's greatest benefactor of the twentieth century. This construction has been dubbed "the last great quad in the city centre" and is notable for its attempt to provide energy from sustainable sources: much of the energy required to heat the building is provided by a combination of solar panels on the roof, geothermal pipes extending deep below the basement and woodchips from the College wood used to fire the boilers.

As the first phase of The Kendrew Quadrangle project Dunthorne Parker Architects were appointed by the College to refurbish three Grade II Listed buildings fronting on to St Giles. Works were carried out to No 20 St Giles which became alumni residential accommodation, The Black Hall, a 17th century building, which became teaching accommodation and The Barn, which became an exhibition and performance space. This project was awarded an Oxford Preservation Trust Plaque in 2008.

Since the College also incorporates Middleton Hall (see above) and owns St Giles House, the former judge's house north of the college, the opening of Kendrew Quadrangle mean that the College extends for almost the entire length of the east side of St Giles, as well as owning parts of the opposite side. This includes the The Eagle and Child pub (where the well-known writers J. R. R. Tolkien and C. S. Lewis often met their literary friends), complementing the Lamb and Flag opposite it on the College side of the road, which the College owns and operates (using the profits to fund graduate scholarships).

The SCR was renovated and extended in 2004 and 2005 by MJP Architects. The new building was given an award by the Royal Institute of British Architects in 2006.