Oxford University Cycling Club (OUCC) was founded in 1873, making it one of the oldest cycling clubs in the United Kingdom.

Cycling is a discretionary full blue sport at Oxford University, with half blues awarded to the three riders comprising the fastest Oxford team in the Varsity Match against Cambridge, as well as three full blues awarded at the captain's discretion.

The OUCC was founded in 1873, by Edmund Robert Bartley Denniss[1] (Hertford College), as the Oxford University Bicycle Club. Cycling was then an uncommon sport in the United Kingdom. The CTC was still young, and owning a bike was a financial undertaking. According to OUCC records, there was a paid attendant to keep members' machines clean. It is believed that the original name of OUCC was the Dark Blue Cycling Club, now a club for OUCC alumni.

The growth of motoring in the 20th Century caused a lack of interest in cycling, which became more downmarket and considered by some a vulgar form of transport. By the Brideshead era of the 1920s, ownership of a well-maintained specialist bike in Oxford would have been considered unusual or eccentric. Undergraduates used and continue to use decrepit town bikes, often with a wicker basket on the front and, in most cases, use of bicycles stopped there. At home, the family car would represent the primary means of transport, and consequently cycling became the transport of the working man. 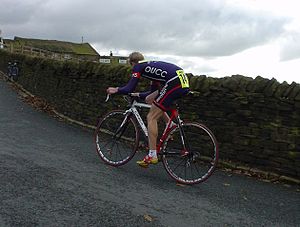 During the 1930s, 40s and early 50s, the club's existence was intermittent as enthusiasts came and went. In Michaelmas Term of 1957 the club was restarted by Peter Hopkins, Jim Thompson and Bill Speck. From this point the OUCC has continued to thrive. Sunday club-runs were well supported and extra training runs established. In 1958 the first Varsity Match was organised on the H23 course. The club was affiliated to the break-away British League of Racing Cyclists for road racing. Touring flourished after the club was re-established in the 1950s, with the first touring weekend during the Christmas vacation of 1957–58. Touring weekend continuesto be popular.

Over the past decade, OUCC has been a successful club. Most notably, for a university club, successes include BUCS titles in all disciplines of racing.