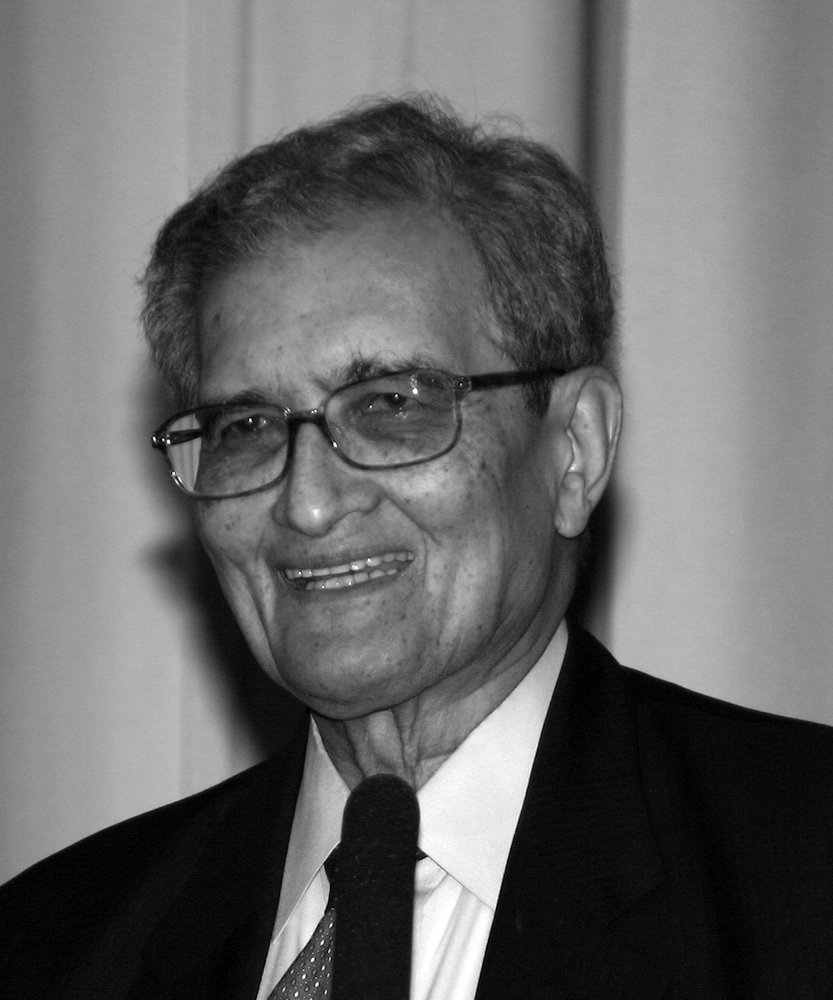 Amartya Kumar Sen CH (Hon) ( _bn. অমর্ত্য কুমার সেন "Ômorto Kumar Shen") (born ), is an n , , and a winner of the in 1998, "for his contributions to welfare economics" for his work on , , , the underlying mechanisms of , and political liberalism.

From 1998 to 2004 he was Master of Trinity College at , becoming the first Asian academic to head an college. Amartya Sen is interested in the debate over . He has given lectures to senior executives of the and is a former honorary president of .

Among his many contributions to , Sen has produced work on . He is currently the Lamont University Professor at . Amartya Sen's books have been translated into more than thirty languages. He is a trustee of Economists for Peace and Security.

Sen was born in , , the University town established by the poet , another Indian Nobel Prize winner. His was in Wari, in modern-day . Rabindranath Tagore is said to have given Amartya Sen his name ("Amartya" meaning "immortal").

Sen began his high-school education at St Gregory's School in Dhaka in 1941, in modern-day Bangladesh. His family migrated to India following partition in 1947. Sen studied in at the school and before moving to , where he earned a First Class BA in 1956 and then a Ph.D. in 1959. He started his academic career at the age of 23 as and of Department of Economics at , . Between 1960–1961, he taught at as a visiting professor. [http://nobelprize.org/nobel_prizes/economics/laureates/1998/sen-autobio.html.] He was also allowed four years to immerse himself in philosophical issues during his stay at Trinity College.

He has taught at , , , Oxford (where he was first a Professor of Economics at Nuffield College and then the Drummond Professor of Political Economy and a Fellow of ), , Harvard and was Master of Trinity College, Cambridge, between 1998 and 2004. [ [http://www.trin.cam.ac.uk/index.php?pageid=172 The Master of Trinity] ] In January 2004 Sen returned to Harvard. He is also a contributor to the Eva Colorni Trust at the former .

In May 2007, he was appointed as chairman of Nalanda Mentor Group to steer the execution of Project, which seeks to revive the ancient seat of learning at , Bihar, India into an international university.

Sen's papers in the late 1960s and early 1970s helped develop the theory of , which first came to prominence in the work by the American economist , who, while working at the RAND Corporation, famously proved that all voting rules, be they or two thirds-majority or , must inevitably conflict with some basic norm. Sen's contribution to the literature was to show under what conditions would indeed come to pass as well as to extend and enrich the theory of social choice, informed by his interests in history of economic thought and .

In 1981, Sen published "Poverty and Famines: An Essay on Entitlement and Deprivation" (1981), a book in which he demonstrated that famine occurs not only from a lack of , but from inequalities built into mechanisms for distributing food. Sen's interest in famine stemmed from personal experience. As a nine-year-old boy, he witnessed the , in which three million people perished. This staggering loss of life was unnecessary, Sen later concluded. He presents data that there was an adequate food supply in Bengal at the time, but particular groups of people including rural landless labourers and urban service providers like haircutters did not have the monetary means to acquire food as its price rose rapidly due to factors that include British military acquisition, panic buying, hoarding, and price gouging, all connected to the war in the region. In "Poverty and Famines", Sen revealed that in many cases of famine, food supplies were not significantly reduced. In Bengal, for example, food production, while down on the previous year, was higher than in previous non-famine years. Thus, Sen points to a number of social and economic factors, such as declining wages, unemployment, rising food prices, and poor food-distribution systems. These issues led to starvation among certain groups in society. His focuses on , a person's actual ability to be or do something, rather than on approaches, which are common in economics and simply focuses on non-interference. In the Bengal famine, rural laborers' negative freedom to buy food was not affected. However, they still starved because they were not positively free to do anything, they did not have the functioning of nourishment, nor the capability to escape morbidity.

In addition to his important work on the causes of famines, Sen's work in the field of development economics has had considerable influence in the formulation of the "", published by the . This annual publication that ranks countries on a variety of economic and social indicators owes much to the contributions by Sen among other social choice theorists in the area of economic measurement of poverty and inequality.

Sen's revolutionary contribution to development economics and social indicators is the concept of 'capability' developed in his article "Equality of What." He argues that s should be measured against the concrete capabilities of their s. This is because top-down development will always trump as long as the definition of terms remains in doubt (is a 'right' something that must be provided or something that simply cannot be taken away?). For instance, in the citizens have a hypothetical "right" to vote. To Sen, this concept is fairly empty. In order for citizens to have a capacity to , they first must have "functionings." These "functionings" can range from the very broad, such as the availability of , to the very specific, such as transportation to the polls. Only when such barriers are removed can the citizen truly be said to act out of personal choice. It is up to the individual society to make the list of minimum capabilities guaranteed by that society. For an example of the "capabilities approach" in practice, see 's "Women and Human Development".

He wrote a controversial article in the entitled "More Than 100 Million Women Are Missing", analyzing the mortality impact of unequal rights between the genders in the developing world, particularly . Other studies, such as one by , have argued that this is an overestimation, though Oster has recanted some of her conclusions. [http://papers.nber.org/papers/w13971]

Sen was seen as a ground-breaker among late twentieth-century economists for his insistence on discussing issues seen as marginal by most economists. He mounted one of the few major challenges to the economic model that posited self-interest as the prime motivating factor of human activity. While his line of thinking remains peripheral, there is no question that his work helped to re-prioritize a significant sector of economists and development workers, even the policies of the .

Welfare economics seeks to evaluate economic policies in terms of their effects on the well-being of the community. Sen, who devoted his career to such issues, was called the "conscience of his profession." His influential monograph "Collective Choice and Social Welfare" (1970), which addressed problems related to individual rights (including formulation of the ), justice and equity, majority rule, and the availability of information about individual conditions, inspired researchers to turn their attention to issues of basic welfare. Sen devised methods of measuring poverty that yielded useful information for improving economic conditions for the poor. For instance, his theoretical work on inequality provided an explanation for why there are fewer women than men in India and China despite the fact that in the West and in poor but medically unbiased countries, women have lower mortality rates at all ages, live longer, and make a slight majority of the population. Sen claimed that this skewed ratio results from the better health treatment and childhood opportunities afforded boys in those countries, as well as sex-specific abortion.

Governments and international organizations handling food crises were influenced by Sen's work. His views encouraged policy makers to pay attention not only to alleviating immediate suffering but also to finding ways to replace the lost income of the poor, as, for example, through public-works projects, and to maintain stable prices for food. A vigorous defender of political freedom, Sen believed that famines do not occur in functioning democracies because their leaders must be more responsive to the demands of the citizens. In order for economic growth to be achieved, he argued, social reforms, such as improvements in education and public health, must precede economic reform.

Although Sen is a self-proclaimed , he claims that this can be associated with as a political entity. [Reported lecture http://www.facinghistory.org/Campus/reslib.nsf/Campus/reslib.nsf/themeandconceptpublic/872E6F4F8B5E996085256F8900771ED9?opendocument] [Self-proclaimed http://www.chowk.com/show_article.cgi?aid=00005503&channel=gulberg ] [World Bank http://info.worldbank.org/etools/BSPAN/PresentationView.asp?EID=354&PID=688 ] [Press meeting http://www.rediff.com/business/1998/dec/28sen.htm]

Sen is criticized as anti-market proponent by some economists, and as uncritical of globalization by others. [http://books.guardian.co.uk/departments/politicsphilosophyandsociety/story/0,,465963,00.html] Sen cites as a major influence on his thinking.

Sen's maternal grandfather was a renowned scholar of medieval Indian literature, an authority on the philosophy of and a close associate of in Santiniketan. Sen's father was Ashutosh Sen and mother Amita Sen who were born at Manikganj, . His father taught chemistry at (now in ). Sen's first wife was , a much loved Indian writer and scholar, with whom he had two children: Antara and Nandana. Their marriage broke up shortly after they moved to London in 1971. In 1973, he married his second wife, Eva Colorni. However, she died from quite suddenly in 1985. They had two children, Indrani and Kabir. His present wife is , an economic historian, and an expert on and Fellow of .

Sen brought up his youngest children on his own. Indrani is a journalist in New York, and Kabir teaches music at Shady Hill School in Cambridge, and has produced 3 of his own Hip-Hop Albums. His eldest daughter is a notable Indian journalist who, along with her husband Pratik Kanjilal, publishes "The Little Magazine". is a noted Bollywood actress. Sen usually spends winter holidays at his home in India, where he likes to go on long bike rides, and maintains a house in Cambridge, Massachusetts, where he and Emma spend the spring and long vacations. Asked how he relaxes, he replies: "I read a lot and like arguing with people."

Amartya Sen has been criticized for his writings outside of economics, especially for his views on the and , by in "". [ [http://www.sais-jhu.edu/programs/mideast/documents/Recent%20Articles/Articles/Enemies%20A%20Love%20Story.pdf Fouad Ajami: “Enemies, a Love Story.A Nobel laureate argues that civilizations are not clashing. The Washington Post. Sunday, April 2, 2006] ]

Historian Mark Tauger disagrees with Sen that food availability wasn't a problem in 1940s Bengal and argues that the famine was mainly the result of a natural disaster. [ [http://www.as.wvu.edu/history/Faculty/Tauger Mark Tauger faculty information at West Virginia University] ]

*He received the Nobel Memorial Prize in Economics for his work in in 1998.
* He received the , the highest civilian award in India 1999.
* In 1999 he received honorary citizenship of from Prime Minister in recognition of his achievements in winning the Nobel Prize, and given that his family origins were in what has become the modern state of Bangladesh
* He received the 2000 Leontief Prize for his outstanding contribution to economic theory from the .
*In 2002 he received the International Humanist Award from the .
*Eisenhower Medal, for Leadership and Service USA, 2000;
*, UK, 2000.
*In 2003, he was conferred the Lifetime Achievement Award by the .
*Life Time Achievement award by Bangkok-based (UNESCAP)

[http://scholar.google.com/scholar?q=amartya+sen&ie=UTF-8&oe=UTF-8&hl=en&btnG=Search Other Publications on Google Scholar]

;Audio
* [http://thoughtcast.org/casts/economist-amartya-sen-on-identity-and-violence Amartya Sen discusses his book "Identity and Violence: The Illusion of Destiny"] , on
* [http://www.itconversations.com/shows/detail1048.html Interview] on
* [http://www.radioopensource.org/immigration-and-development-with-amartya-sen/ Immigration and Development, with Amartya Sen] , on
* [https://deimos.apple.com/WebObjects/Core.woa/Browse/itunes.stanford.edu.1770146.01770159.1129989105?i=1567047397 What do we want from a Theory of Justice? Stanford Visiting Lecture Speech on iTunes]