In the small Mediterranean island nation of Malta the predominant religion is Roman Catholicism.

History of Christianity in Malta

The Church in Malta is described in the Book of Acts (Acts 27:39-42; Acts 28:1-11) to have been founded by its patrons Saint Paul the Apostle and Saint Publius, who was its first bishop.[1] The Islands of St. Paul (or St. Paul's Islets), in effect only one island during low tide, are traditionally believed to be the site where Saint Paul was shipwrecked in the year 60 CE, on his way to trial and eventual martyrdom in Rome.

Establishment of the Archdiocese of Malta 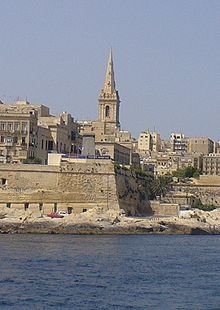 According to tradition, Publius, the Roman Governor of Malta at the time of Saint Paul's shipwreck, became the first Bishop of Malta following his conversion to Christianity. After ruling the Maltese Church for 31 years, Publius was transferred to the See of Athens in 90 AD, where he was martyred in 125 AD. There is scant information about the continuity of Christianity in Malta in subsequent years, although tradition has it that there was a continuous line of bishops from the days of St. Paul to the time of Emperor Constantine. The Acts of the Council of Chalcedon record that in 451 AD, a certain Acacius was Bishop of Malta (Melitenus Episcopus). It is also known that in 501 AD, a certain Constantinus, Episcopus Melitenensis, was present at the Fifth General Council. In 588 Tucillus, Miletinae civitatis episcopus, was deposed by Pope Gregory I, and his successor Trajan elected by the clergy and people of Malta in 599 AD. The last recorded Bishop of Malta before the Arab invasion of the Islands was a Greek by the name of Manas, who was subsequently incarcerated at Palermo, Sicily.[2]

Sovereignty of the Order

While the Maltese Islands were under the dominion of the Knights of Malta, from the 15th century through to the late 18th century, the Grand Master had the status of a prince of the Catholic Church, and enjoyed a special relationship with the Pope, which occasionally led to a considerable amount of friction with the local Bishops.

Over the years, the power of the Knights declined; their reign ended when Napoleon Bonaparte's fleet arrived in 1789, en route to his expedition of Egypt. As a ruse, Napoleon asked for safe harbor to resupply his ships, and then turned his guns against his hosts once safely inside Valletta. Grand Master Hompesch capitulated, and Napoleon stayed in Malta for a few days during which he systematically looted the moveable assets of the Order and established an administration controlled by his nominees. He then sailed for Egypt leaving a substantial garrison in Malta. Since the Order had also been growing unpopular with the local Maltese, the latter initially viewed the French with optimism. This illusion did not last long. Within months the French were closing convents and seizing church treasures. The Maltese people rebelled, and the French garrison of General Claude-Henri Belgrand de Vaubois retreated into Valletta. After several failed attempts by the locals to retake Valletta, they asked the British for assistance. Rear Admiral Lord Horatio Nelson decided on a total blockade, and in 1800 the French garrison surrendered.

Establishment of the Diocese of Gozo 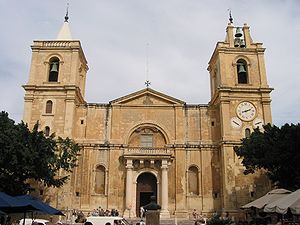 Historically part of the Diocese of Malta, Gozitans brought forward several petitions for the creation of an independent diocese, including in 1798, during the French occupation, and again in 1836. A third petition, brought directly to Pope Pius IX in 1855, met with success. Instrumental in this effort were a young priest named Don Pietro Pace, who would several years later serve as Bishop of Gozo, and Sir Adriano Dingli, Crown Advocate. The British Colonial Office signalled its approval in October 1860.[3]

In 1863, Archpriest Michele Francesco Buttigieg was elected Auxiliary Bishop of Malta with instructions to reside in Gozo. One year later, on September 16, 1864, the Pope issued a Bull entitled "Singulari Amore" (With remarkable Love), which decreed that the Islands of Gozo and Comino were separated from the Diocese of Malta. On September 22, 1864, Bishop Buttigieg was elected the first bishop of Gozo, with the "Matrice" in Victoria, dedicated to the Assumption of the Blessed Virgin (Maltese: "Marija Assunta"), serving as his Cathedral.[3]

In 1814, Malta became part of the British Empire in accordance with the Treaty of Paris. British rule lasted 150 years until 1964 when Malta gained independence. British rule brought the first sizeable population of members of the Anglican Church and Protestant denominations in the form of civil servants and retirees. British rule was typified by a condition of religious tolerance.

St. Paul is venerated as the patron saint of Malta. A number of parishes throughout Malta and Gozo are dedicated to him, including: the Cathedral Church at Mdina, the Collegiates of Rabat and Valletta, and the parishes of Ħal-Safi and Munxar.

St. John the Baptist, also known as St. John the Forerunner is also revered throughout Malta. As the patron saint of the Knights of Malta/Order of Saint John of Jerusalem, his image and symbols were incorporated into Malta's art and culture during the reign of the knights. A co-cathedral, along with numerous churches and chapels, are named in his honor.

Malta is the only nation in the world that has collectively been awarded the George Cross for conspicuous gallantry in World War II as a part of the British Empire, and its flag bears an image of that award.

The Feast of the Assumption of the Blessed Virgin Mary

Since 1600 the Maltese were devoted to the Assumption of the Virgin, locally known as Santa Marija, and asked the bishop to make Blessed Virgin Mary the co-patroness of the Islands. At that time there were already about 40 churches and chapels dedicated specifically to the Assumption. This request was accepted and promulgated more than 200 years later, on 18 February 1848, when the local bishop, H.L. Mgr Publius M. dei Conti Sant, made the Assumption a special patroness of the Maltese Islands with the words "Maria Assumpta Melitæ patrona et princeps inter sanctos titulares" (Mary, assumed in Heaven, patroness of Malta and first among titular saints). The feast took major significance in the hearts of the Maltese when on 15 August 1942 a battered, half-sunk convoy managed to enter the Grand Harbour of Valletta to feed the starved nation during the Second World War. Since then the Assumption has been considered as the special protectress and intercessor of the Maltese Nation.

Out of approximately 60 parishes in Malta and Gozo, 11 are dedicated to the Assumption. These include the Cathedral Church of Gozo, the parishes of Gudja, Ħal-Għaxaq, l-Imqabba, Qrendi, Mosta, Dingli, Attard, Mġarr, Birkirkara and Żebbuġ (Gozo). Many other churches have a treasured statue representing the mystery of the Assumption. Naturally, all of these being titular statues, they are the most treasured sacred artifacts of their respective communities. All statues in churches are kept with great care and devotion, however the devotion to statues representing patrons of villages is far greater than devotion to other representations.

Noteworthy details linked to the feast of the Assumption are the world-famous Mosta Rotunda [1] (known as the Mosta Dome), the magnificent Gozo Cathedral found in the old Citadel [2], and the exceptional annual fireworks display held on 14 August at Imqabba, organized by the St Mary Fireworks Factory of Imqabba, winners of the First Malta International Fireworks Festival (2006). This fireworks display is renowned as the best pyro-musical show on the island and thousands cram the village streets annually in order to watch it. [3]

The Constitution of Malta provides for freedom of religion but establishes Roman Catholicism as the state religion. Freedom House and the World Factbook report that 98 percent of the Maltese religion is Roman Catholic, making the nation one of the most Catholic countries in the world.[4][5] As at 2005, the rate of regular mass attendance was estimated at 52.6 percent (51 percent for Malta Island, 72.7 percent for Gozo), compared to 63.4 percent in 1995.[6] There are two territorial jurisdictions: the Archdiocese of Malta and the Diocese of Gozo.

In public schools religious instruction in Roman Catholicism is part of the curriculum but students may opt to decline participation in religious lessons. Subsidies are granted to private Catholic schools.

Pope John Paul II made a total of three pastoral visits to Malta–twice in 1990 and once in 2001, during which he beatified three Maltese.[7]

Religious toleration is the norm, and the two percent of the population that is not Roman Catholic mainly consist of small communities of Muslims and Jews, in addition to Anglican and Protestant communities consisting mostly of British retirees. There is one Muslim religious school in the country, and the government had approved plans for a 500-grave Muslim cemetery[citation needed].

The percentage of people that attend mass in every locality of Malta:

Other totals of people attend to mass, because these localities are not in percentage:

Additionally, between a quarter and a fifth of mass attendees, are active members of a Church Movement, group or initiatives such as the Catholic Charismatic Renewal, the Neocatechumenal Way, the Legion of Mary, Opus Dei, Youth Fellowship and other Church groups within the parish. Malta also has the highest number of members of the Neocatechumenal Way per population in the world.

Malta is the only country in Europe that does not permit divorce.[8] Performing abortion on Maltese territory is also illegal, though over the years several loopholes (non-inclusion of outer territorial waters, no mention of advertising) permitted individuals to circumvent the ban for limited time periods.[9] In an SMS poll, Malta chose the Maltese cross to be the image on the Maltese Euro and rejected one of John the Baptist baptizing Jesus, which had garnered a strong majority in a previous poll, after attracting opposition even from the Local Bishops who did not see it fit to place Jesus' face on a coin.[10]