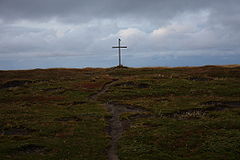 The conversion of Norway to Christianity began in 1000 AD. Prior to the conversion Norwegians practised Norse paganism. 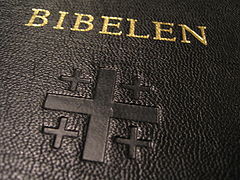 Christianity is the largest religion in Norway. Norway has historically been called a Christian country, but according to the most recent Eurobarometer Poll 2005,[1] only 32% of the Norwegian population say they believe there is a God. A majority of the population are members of the Church of Norway. Many Norwegians are secular; while 70% of the population say they have a faith, only 32% practice their respective faith. One need not go further back than the beginning of the 1900s to find a much more religious atmosphere. At numerous times in history, Norway sent more missionaries per capita than any other country. This changed considerably from the 1960s. Today, only 12% of the population attend church services each month.[2] Citizens born in Norway to one or two Norwegian parents are automatically added to the list of Protestant Christians in Norway, and are required to "sign out" of the church. There are two categories kept in the church's books, "medlemmer" (members) and "tilhørige" (belonging to [the State church]). Members technically have to be baptised, whereas "tilhørige" are to be taken out of the books if not baptised by the age of 18. Norwegian citizens' tax funds are given to the Protestant Church until one registers as a member of another religious group, or as a member of the Humanist association.[3]

From the Battle of Stiklestad. 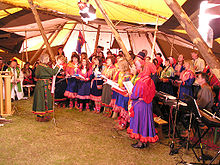 Shamanism persisted among the Sami up until the 18th century, but no longer exists in its traditional form. Most Sami today belong to the Lutheran church of Norway.

The conversion of Norway to Christianity began in 1000 AD. The raids on the British Isles and the Frankish kingdoms had brought the Vikings in touch with Christianity. Haakon the Good of Norway who had grown up in England tried to introduce Christianity in the tenth century, but had met resistance from pagan leaders and soon abandoned the idea.

The Christians in Norway often established churches or other holy sites at places that had previously been sacred under the Norse religion. The spread of conversion can be measured by burial sites as Pagans were buried with grave goods while Christians weren't. Christianity had become well established in Norway by the middle of the 11th century and had become dominant by the middle of the 12th century. Stave churches were built of wood without the use of nails in the 13th century.

Compared with other countries

The U.S state of Alabama has a population around the same size as Norway's population, but church attendance in Alabama is as high as 11 times higher than in Norway.

Below is a table that compares Norway with other countries in importance of religion.

The Association of Religion Data Archives

The Church of Norway (Den norske kirke in Bokmål or Den norske kyrkja in Nynorsk) is the state church of Norway. The church confesses the Lutheran Christian faith. It has as its foundation the Christian Bible, the Apostles' Creed, Nicene Creed, Athanasian Creed, Luther's Small Catechism and the Augsburg Confession. The Church is a member of the Porvoo Communion with 12 other churches, among them the Anglican Churches of Europe. It has also signed some other ecumenical texts, including the Joint Declaration on the Doctrine of Justification with the Roman Catholic Church.

Most Norwegian villages have their own church like this. 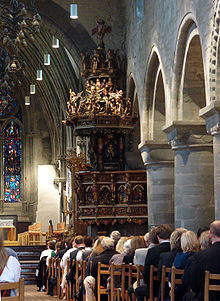 A liturgy in Stavanger Cathedral.

The constitutional head of the Church is the King of Norway, who is obliged to profess the Lutheran faith. The Church of Norway is subject to legislation, including its budgets, passed by the Norwegian parliament, the Storting, and its central administrative functions are carried out by the Royal Ministry of Culture and Church Affairs.

The Church has a congregational and episcopal structure, with 1,284 parishes, 106 deaneries and 11 dioceses, namely:

The Evangelical Lutheran Free Church of Norway (Den Evangelisk Lutherske frikyrkja i Noreg in Norwegian) or the Free Church as it is commonly known, is a nationwide Lutheran church in Norway consisting of 81 congregations with 19,262 members in 2009[19]. It was founded in 1877 in Moss. It should not be confused with the Church of Norway, though both churches are members of the Lutheran World Federation. The Free Church is economically independent.

The following numbers is from :[19]

The Swedish Margareta Congregation in Oslo

The Methodist Church of Norway 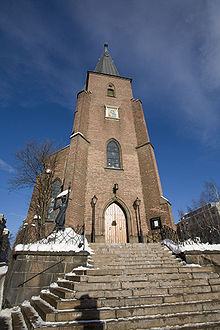 The Catholic Church in Norway is part of the worldwide Catholic Church, under the spiritual leadership of the Pope and the Curia in Rome. There are about 57,000 - 230,000 Catholics in the country, 70% of whom were born abroad[20]. The country is divided into three Church districts – the Diocese of Oslo and the prelatures of Trondheim and Tromsø and 32 parishes. The Bishop of Oslo participates in the Scandinavian Bishops Conference. The Catholic Church in Norway is as old as the kingdom itself, dating from approximately 900 A.D., with the first Christian monarchs, Haakon I from 934.

At first, the bulk of Roman Catholic immigrants came from Germany, The Netherlands, and France. Immigration from Chile, the Philippines, and from a wide range of other countries began in the 1970s. This development has further increased in the last few years with economic immigrants from Poland and Lithuania. The official number of Catholics, however, decreased slightly in 2004.[citation needed] This is because the Norwegian state demands a person's social security number (fødsels-og personnummer) in order to grant the per capita subsidy. The real number of Roman Catholics in Norway is possibly as much as twice the official number of 50,000.[citation needed] Ethnic Norwegian Catholics are now greatly outnumbered by the immigrants, although the former tend to be far more observant and conservative, being a self-selected group largely of ex-Lutheran converts.