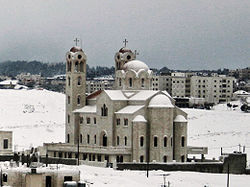 A Greek Orthodox Church in Amman

Christians have resided in the territory constituting the modern state of Jordan since shortly after the crucifixion of Jesus Christ, early in the 1st century AD. Jordanian Christians now number at about 400,000 people, or 6% of the population of approximately 6,500,000, which is lower than the near 20% in the early 20th century. This is largely due to lower birth rates in comparison with Muslims and to a strong influx of Muslim immigrants from neighboring countries. Also, a larger percent of Christians compared to Muslims emigrate to western countries, resulting in a large Jordanian Christian diaspora.

There are now a large but unknown number of Iraqi Christians—such as Chaldeans and Assyrians—in Jordan.

Christians are well integrated in the Jordanian society and have a high level of freedom. They form a significant part of the kingdom's political and economic elite. Christians enjoy high economic and social opportunities in the Hashemite Kingdom of Jordan compared to the position of their co-religionists in the rest of the Middle East. Christians are allotted 8 out of a total of 110 seats in the Jordanian parliament, and also hold important ministerial portfolios, ambassadorial appointments, and positions of high military rank. A survey by a Western embassy found that half of Jordan's prominent business families were Christians.

Jordanian Christians are allowed by the public and private sectors to leave their work to attend mass on Sundays. All Christian religious ceremonies are publicly celebrated in Jordan. Christians have established good relations with the royal family and the various Jordanian government officials, and they have their own ecclesiastical courts for matters of personal status.

The government of Jordan has contributed to restoring pilgrimages to the baptismal site of Jesus Christ.

There are many Christian schools in Jordan that educate students from both Christian and Muslim families. Some members of the royal family have attended a Christian school for a portion of their education.

The Rosary Sister's School is run by the Catholic Church.

The National Orthodox School is run by the Orthodox Church in Jordan and has received The Cambridge Queen Rania Award multiple times.

Also De La Salle College one of the most prestigious schools in Amman founded in 1950. An institute of the Brothers of the Christian Schools founded by baptist de la Salle. Lady of Nazareth college and Terra Santa college are examples too.

The first Hospital built in Jordan was the 'Evangelical Hospital' built in As-Salt by the Church Missionary Society.

The Italian Hospital in Amman and in Kerak were started by a Catholic surgeon and is entrusted to the Comboni Missionary Sisters. The Catholic Church also runs a maternity hospital and a general hospital in Irbid in northern Jordan.

The Government Hospital in Ajloun was originally run by Baptists.

Portions of the Biblical narrative took place in the towns and the country side that now makes up Jordan.

Bethany Beyond the Jordan where John the Baptist preached and where Jesus Christ was baptized is located on the Jordan side of the Jordan river.

Also, Mount Nebo where Moses viewed the Land of Canaan is located in western Jordan.

In northern Jordan there is a small creek where an angel met and wrestled with the patriarch Jacob.

The rock struck by Moses to bring forth water and the patriarch Aaron's tomb are both in southern Jordan.

The ruins of the fortress of the Ammonites are on a mountain overlooking downtown Amman. This is the site where King David had Bathsheba's husband Uriah the Hittite killed.

Jordan also contains many sites of historical importance to Christianity. Madaba, a city south of Amman, is the site of a large ancient church with detailed mosaic tile work. There have been many excavations in Madaba that have un-earthed ancient Christian artifacts.

There are many Arab and Frankish castles from the period of the Crusades in Jordan. The most famous of which is Ajlun castle located in the Ajloun district in northern Jordan. Other castles include Montreal (Crusader castle) and Kerak.

Fuheis, a town of just over 10,000, is the only exclusively Christian town in Jordan.