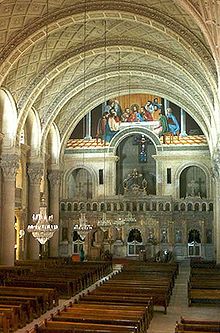 Christianity is a minority religion in Egypt. Egyptian Christians are known as Copts and account for about 10% of the population.[1][2][3][4][5][6][7][8][9][10][11] Despite the small proportion of Christians within Egypt, Egypt's Christian population is the largest in terms of absolute numbers in the greater region of the Middle East and North Africa. The history of Christianity in Egypt dates to the Roman era. Alexandria was an early center of Christianity, and from the 4th century until the Islamic conquest of Egypt in AD 640, Egypt was predominantly Christian.

Over 95% of Egyptian Christians belong to the Coptic Orthodox Church of Alexandria,[8][9][12] an Oriental Orthodox Church. The Coptic Church constitute the largest Christian community in the Middle East[13] and has approximately 4 to 8 million followers in Egypt, in addition to 3 to 4 million abroad. The Coptic Orthodox Church is headed by the Pope of Alexandria and Patriarch of All Africa on the Holy See of Saint Mark, currently Pope Shenouda III. Affiliated sister churches are located in Armenia, Ethiopia, Eritrea, India, Lebanon and Syria.

Christian Denominations in Egypt by number of adherents

Further information: Roman Egypt and History of the Copts

Egyptian Christians believe that the Patriarchate of Alexandria was founded by Mark the Evangelist around AD 33, but little is known about how Christianity entered Egypt. The historian Helmut Koester has suggested, with some evidence, that originally the Christians in Egypt were predominantly influenced by Gnosticism until the efforts of Demetrius of Alexandria gradually brought the beliefs of the majority into harmony with Nicene Christianity.

By AD 200 it is clear that Alexandria was one of the great Christian centres. The Christian apologists Clement of Alexandria and Origen both lived part or all of their lives in that city, where they wrote, taught, and debated.

With the Edict of Milan in 312, Constantine I ended the persecution of Christians. Over the course of the 4th century, paganism was suppressed and lost its following, as the poet Palladius bitterly noted. Graffiti at Philae in Upper Egypt proves worship of Isis persisted at its temples into the 5th century. Many Egyptian Jews also became Christians, but many others refused to do so, leaving them as the only sizable religious minority in a Christian country.

Alexandria became the centre of the first great schism in the Christian world, between the Arians, named for the Alexandrian priest Arius, and their opponents, represented by Athanasius, who became Archbishop of Alexandria in 326 after the First Council of Nicaea rejected Arius's views. The Arian controversy caused years of riots and rebellions throughout most of the fourth century. In the course of one of these, the great temple of Serapis, the stronghold of paganism, was destroyed. Athanasius was alternately expelled from Alexandria and reinstated as its Archbishop between five and seven times. Another religious development in Egypt was the monasticism of the Desert Fathers, who renounced the material world in order to live a life of poverty in devotion to the Church.