History of the Jews in Malta

History of the Jews in Malta
For the play by Christopher Marlowe, see The Jew of Malta.

The history of the Jews in Malta can be traced back to approximately 62 CE. Most contemporary Maltese Jews are Sefardic, however an Ashkenazic prayer book is used.[1]

The first Jew known to have set foot on Malta was Paul of Tarsus, whose ship foundered there in 62 CE.[2] Paul went on to introduce Christianity to the island population.[3]

Greek inscriptions and menorah-decorated tombs indicate that Jews and early Christians lived on Malta during the fourth and fifth centuries CE.[4][5] During the Fatimid rule of the island Jews often held posts as civil servants; one member of the community even reaching the highest possible rank, Vizier.

The Jewish population of Malta peaked in the Middle Ages under Norman rule. The Normans occupied the islands from 1090, with five hundred Jews living on the main island and 350 on the sister island, Gozo. The Jewish people generally prospered during this period and were not required to live in ghettos. Most owned agricultural land or worked as merchants. Avraham Abulafia, a well-known Jewish mystic, lived on Comino from 1285 to his death in the 1290s.

In 1435 the Università demanded the abolition of a tax which was due to be imposed on the Jews. This was well appreciated by the Jewish Community in Malta and Gozo and a Gozitan Jew named Xilorun was chosen as an ambassador of the Maltese Deputies to the court of Sicily. In 1479 Malta and Sicily came under Aragonese rule and the 1492 Edict of Expulsion forced all Jews to leave the country. Because they made up such a large portion of the island's population the Spanish Crown forced them to pay compensation for the losses caused by their expulsion.

It is not clear where the Jews of Malta went, but they may have joined the Sicilian community in Levant. It is also likely that several dozen Maltese Jews converted to Christianity to remain in the country as did many Sicilian Jews. This is further evidenced by the large number of Maltese surnames thought to be of Jewish origin.[6]

In the medieval era when Mdina was Malta's capital, one-third of its population was Jewish. A synagogue inside Mdina was destroyed by an earthquake in 1693. Deeds and other documents written by Jewish notaries in Maltese with Hebrew script are today located in the Mdina Cathedral Museum. They are amongst the earliest known Maltese language texts, dating back to the 14th century.[1]

In 1530 Charles V of Spain gave Malta to the Knights of Saint John. The Knights ruled the island until 1798; many Sicilian conversos then moved here remembering the Knights' liberal policy towards the Jews of Rhodes, but they had to continue practicing their religion in secrecy.[6] Jews volunteered for the desperate attempt to relieve Fort St Elmo during the Great Siege.[1] Following this, was no free Jewish population in the country during the Knights' reign. The Knights would often take passengers of merchant ships - including numerous Jews - hostage in order to get the ransom and it would be up to Jewish Societies for the Redemption of Captives to raise it. There were therefore many Jewish slaves in Malta during this period and Malta was frequently mentioned for its large enslaved Jewish population in Jewish literature of the period.[7] Free Jews wishing to visit the country could only enter through one port in Valletta, which is still known as the Jews' Sallyport. 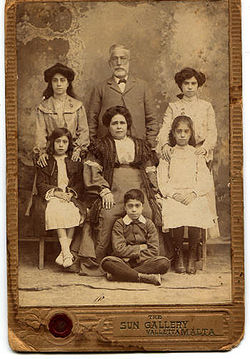 An early photograph of a Maltese Jewish family taken in Valletta, Malta

The majority of the contemporary Maltese Jewish community originates in Jewish immigration from Gibraltar, England, North Africa, Portugal and Turkey during the short period of French rule from 1798 to 1800 and British rule after that. From 1805 Jews were the targets of campaigns by the Maltese directed at all foreigners.[7] In 1846, a Tripolitanian became the country's first modern rabbi.

During the early 20th century the island did not always have a rabbi of its own and rabbis would be flown in from Sicily to perform ceremonies.[8] In the time before World War II many Jews fleeing Nazism came to Malta as it was the only European country not to require visas of Jews fleeing German rule.[7] Numerous Maltese Jews fought Germany in the British Army during the war.

Today, 1,000 Jews live in Malta, of which many are elderly due to the tendency of young inhabitants to emigrate. Maltese Jews live mainly around the capital. They bring a ritual kosher slaughterer from Jerusalem, import kosher wine from Israel, and matza from England. When a boy is born, a mohel from Rome is used.[1] The local flat bread called ftira and the traditional Maltese loaf are both kosher.[1]

In 2000, a new synagogue was built with donations from the USA and the UK. The Jewish Foundation of Malta now manages it along with a Jewish Center.[8] Malta's relations with Israel have been friendly since the former's independence.