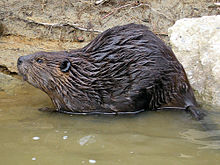 The North American Beaver, Castor canadensis, is the national animal of Canada

This is a list of the mammal species recorded in Canada. There are approximatively 200 mammal species native to Canada. Its large territorial size and variety of ecosystems, ranging from mountains to plains to urban housing, mean that Canada can harbour a great variety of species, including nearly half of the known cetaceans. The most well-represented order is that of the rodents, and the smallest that of the Didelphimorphia (common opossums).

Studies of mammals in Canada hearken back to the 1795 northern explorations of Samuel Hearne, whose account is considered surprisingly accurate. The first seminal work on Canadian mammals, however, was John Richardson's 1829 Fauna Boreali-Americana. Joseph Burr Tyrrell was the first to attempt to produce, in 1888, a comprehensive list of Canadian mammalian species. Ernest Thompson Seton and Charles-Eusèbe Dionne's work were also important. Modern Canadian publications with interest in mammalogy include The Canadian Field Naturalist, the Canadian Journal of Zoology and the French-language Le Naturaliste Canadien.[A]

Several species of mammal have particular symbolism. The Canadian Horse and Beaver are official symbols of Canada,[B] and several provinces have designated native species as symbols.

Rodents make up the largest order of mammals, with over 40 percent of mammalian species. They have two incisors in the upper and lower jaw which grow continually and must be kept short by gnawing. Most rodents are small though the capybara, a rodent native to South America, can weigh up to 45 kg (100 lb).

The lagomorphs comprise two families, Leporidae (hares and rabbits), and Ochotonidae (pikas). They can resemble rodents, but differ in a number of physical characteristics, such as having four incisors in the upper jaw rather than two.

The only primates that live in Canada are human beings. They are only distantly related to the New World monkeys of Central and South America, and the species originated in east Africa. Humans first arrived in large numbers to Canada around 15,000 years ago from North Asia, and surged in migration starting 400 years ago from around the world, especially from Europe.

Chiropteras' most distinguishing feature is that their forelimbs are developed as wings, making them the only mammals in the world naturally capable of flight. Bat species account for about 20% of all mammals.

Cetaceas includes whales, dolphins and porpoises. They are the mammals most fully adapted to aquatic life with a spindle-shaped nearly hairless body, protected by a thick layer of blubber, and forelimbs and tail modified to provide propulsion underwater.

The Carnivoras include over 260 species, the majority of which eat meat as their primary dietary item. Carnivores have a characteristic skull shape and dentition.

The Even-toed ungulates are ungulates whose weight is borne about equally by the third and fourth toes, rather than mostly or entirely by the third as in perissodactyls. There are about 220 artiodactyl species worldwide, including many that are of great economic importance.

Didelphimorphia is the order of common opossums of the Western Hemisphere. Opossums probably diverged from the basic South American marsupials in the late Cretaceous or early Paleocene.They are small to medium-sized marsupials, about the size of a large house cat, with a long snout and prehensile tail.

A number of wild mammalians may be found in Canadian territory without being confirmed natives. Some were voluntarily or involuntarily introduced. These include the House Mouse (Mus musculus), and Norway and Black Rats (respectively Rattus norvegicus and R. rattus). Other include escaped animals; the Coypu (Myocastor coypus), European Rabbit (Oryctolagus cuniculus) and Hares (Lepus europaeus),[52] as well as feral cats, dogs and horses fall into this category. Fallow Deers (Dama dama) and Wild Boars (Sus scrofa) were introduced for hunting.

Finally, other species are encountered only accidentally, or so rarely in Canadian territory that it is impossible to tell whether they are permanent resident. Most of these species are cetaceans, some generally poorly known: Risso's Dolphin (Grampus griseus), the Dwarf and Pygmy Sperm Whales (Kogia sima and K. breviceps), Blainville's and True's Beaked Whale (Mesoplodon densirostris and M. mirus), the False Killer Whale (Pseudorca crassidens), and the Striped Dolphin (Stenella coeruleoalba). The Big Free-tailed and Evening Bats (respectively Nyctinomops macrotis and Nycticeius humeralis), as well as the New England Cottontail (Sylvilagus transitionalis) are found mostly in areas south of the U.S.-Canada frontier, and occasionally in Canada.

The only Canadian, and also last known specimen of the Sea Mink (Mustela macrodon) was captured on Campobello Island, in Nova Scotia in 1894. It is unknown whether the species was ever native to the country, but an unidentified animal reported in 1785 suggest it might have been more common in the Maritimes.

Out of three species that have gone extinct in Canada in written history, two have since been reintroduced. It is not clear whether a fourth species, the aforementioned Sea Mink, was ever a resident of Canada.