The capybara (Hydrochoerus hydrochaeris [1][3][4]), also known as capivara in Portuguese,[5] and capibara, chigüire in Venezuela, Colombia, and Ecuador ronsoco in Peru, chigüiro, and carpincho in Spanish,[6][5][7] is the largest living rodent in the world.[8] Its closest relatives are agouti, chinchillas, coyphillas, and guinea pigs.[9] Its common name, derived from Kapiÿva in the Guarani language,[5] means "master of the grasses"[10] while its scientific name, both hydrochoerus and hydrochaeris, comes from Greek ὕδρω (hydro = water) + χοίρος (choiros = pig, hog).

Fossil record and other species 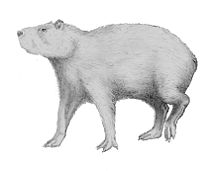 Life restoration of the extinct Protohydrochoerus

A larger capybara called Neochoerus pinckneyi once existed in North America, having invaded that continent during the Great American Interchange that followed formation of the Isthmus of Panama. Other fossil caviomorphs that were eight times the size of modern capybaras have been called "capybaras" by the popular press, but were actually dinomyids related to the pacarana.[16]

There is also an extant "lesser capybara", Hydrochoerus isthmius, with a disjoint range in Colombia, Venezuela and Panama.[3]

Capybara are semi-aquatic mammals[13] found wild in much of South America (including Colombia, Ecuador, Bolivia, Venezuela, Brazil, Argentina, Guyana, Suriname, French Guiana, Uruguay, Peru, and Paraguay[10]) in densely forested areas near bodies of water, such as lakes, rivers, swamps, ponds and marshes,[11] as well as flooded savannah and along rivers in tropical forest. They roam in home ranges of 25–50 acres (10–20 ha).[16]

Many escapees from captivity can also be found in similar watery habitats around the world. Sightings are fairly common in Florida, although a breeding population has not yet been confirmed.[17] Though it has been erroneously stated that a population of capybara existed in the River Arno in Florence, Italy, this was determined to be the nutria or coypu (Myocastor coypus), a considerably smaller South American aquatic rodent with a similar appearance. Recently, it has been spotted in the Central Coast of California.[18]

Capybaras are herbivores, grazing mainly on grasses and aquatic plants,[6][11] as well as fruit and tree bark.[13] An adult capybara will eat 6 to 8 pounds (2.7 to 3.6 kg) of grasses per day.[16] Capybara are very selective feeders with four to six plant species making 75% of its diet.[19] They will select the leaves of one species and disregard other species surrounding it.[20] Capybaras eat a greater variety of plants during the dry season as there are fewer plants available. While they eat grass during the wet season, they have to switch to reeds during the dry season as they are more abundant.[20] Plants that capybaras eat during the summer lose their nutritional value in the winter and are thus not consumed at that time.[19] The capybara's jaw hinge is non-perpendicular and they thus chew food by grinding back and forth rather than side-to-side.[8] Capybaras are coprophagous, meaning they eat their own feces as a source of bacterial gut flora and to help digest the cellulose in the grass that forms their normal diet and extract the maximum protein from their food. They may also regurgitate food to masticate again, similar to cud-chewing by a cow.[21]

Like its cousin the guinea pig, the capybara does not have the capacity to synthesize vitamin C, and capybaras unsupplemented with vitamin C in captivity have been reported to develop gum disease as a sign of scurvy.[22]

Diorama of a green anaconda devouring a capybara

They can have a life span of 8–10 years in the wild[23] but average a life less than four years as they are "a favourite food of jaguar, puma, ocelot, eagle and caiman".[10] The capybara is also the preferred prey of the anaconda.[24] Capybara are farmed for meat and skins in South America.[25] It is widely believed that capybara were declared by Papal Bull to be fish so they may be eaten during Lent.[26] Because of this belief, poaching increases during the period right before Easter.[25]

Capybaras are very gregarious. While they do sometimes live solitarily they are more commonly found in groups that average 10-20 individuals, with 2-4 of them being adult males, 4-7 being adult females and the rest being juveniles.[27] Capybara groups can consist of as many as 50 or 100 individuals during the dry season,[21][28] when the animals gather around available water sources. Males are organized in stable, linear hierarchies. The dominant male in each group is significantly heavier than any of the subordinates, but among subordinates, status is not correlated with weight.[29] The dominant male is positioned in the center of the group while subordinates are on the periphery. These hierarchies are established early in life among the young with play fights and mock copulations.[27] The most dominant males have access to the best resources.[29] Capybaras are very vocal and, when in groups, chatter with each other to establish social bonds, dominance or general group census.[28] They can make a dog-like bark which is made when the animals are threatened or when females are herding young.[30] The bark of a capybara is often mistaken for that of a dog.[21]

When in estrus, the female's scent changes subtly and nearby males begin pursuit.[29] In addition, a female will alert males that she is in estrus by whistling though her nose.[21] During mating, the female has the advantage and mating choice. Capybaras mate only in the water and if a female does not want to mate with a certain male she will either submerge or leave the water.[21][28] Dominant males are highly protective of the females, however they usually can’t prevent all the subordinates from copulating.[29] The larger the group, the harder it is for the male to watch all the females. Dominant males secure significantly more matings than each subordinate, but subordinate males, as a class, are responsible for more matings than each dominant male.[29] The lifespan of the capybara's sperm is longer than that of other rodents.[32]

Capybara gestation is 130–150 days and usually produces a litter of four capybara babies, but may produce between two and eight in a single litter.[12] Birth is on land and the female will rejoin the group within a few hours of delivering the newborn capybaras, who will join the group as soon as they are mobile. Within a week the young can eat grass, but will continue to suckle - from any female in the group - until weaned at about 16 weeks. Youngsters will form a group within the main group.[10] Alloparenting has been observed in this species.[28] The rainy season of April and May mark the peak breeding season.[5] Like other rodents, the front teeth of capybaras grow continually to compensate for the constant wearing-down from eating grasses;[10] their cheek teeth also grow continuously.[8] When fully grown, a capybara will have coarse hair that is sparsely spread over their skin, making the capybara prone to sunburn. To prevent this, they may roll in mud to protect their skin from the sun.[16]

Capybara lounging in a shallow pool in captivity

A capybara yawns at Ueno Zoo.

Capybaras are excellent swimmers and can survive, completely underwater for up to five minutes,[11] an ability they will use to evade predators.[citation needed] If necessary, a capybara can sleep underwater, keeping its nose just over the waterline.

During midday, as temperatures increase, they wallow in water and then graze in late afternoons and early evenings when it is cooler. They sleep little, usually dozing off and on throughout the day and grazing into and through the night.

Capybara are not on the IUCN list[9] and therefore not considered a threatened species; their population is stable through most of their South American ranges, though in some areas hunting has reduced their numbers.[10][11]

Capybaras are hunted for their meat and pelts in some areas,[7] and otherwise killed by humans who see their grazing as competition for livestock. In some areas they are farmed, which has the effect of ensuring that the wetland habitats are protected. Their survival is aided by their ability to breed rapidly.[10]

Capybaras can be found in many areas in zoos and parks,[8] and may live for 12 years in captivity.[10] Capybaras are gentle and will usually allow humans to pet and hand-feed them.

The meat is said to taste like pork.[5] During Lent, capybara meat is especially popular in parts of South America, especially in Venezuela, as it is claimed that the Catholic Church, in a special dispensation, allowed capybara meat to be consumed on days that consumption of meat was otherwise not allowed. There are differing accounts of how the dispensation arose.[5][16][33] Capybaras are occasionally kept as pets in the United States,[34] though it is illegal in some states and in various other countries.