This article is about the species of whale. For the class of submarine, see Narwhal class submarine.

The narwhal, Monodon monoceros, is a medium-sized toothed whale that lives year-round in the Arctic. One of two living species of whale in the Monodontidae family, along with the beluga whale, the narwhal males are distinguished by a characteristic long, straight, helical tusk extending from their upper left jaw. Found primarily in Canadian Arctic and Greenlandic waters, rarely south of 65°N latitude, the narwhal is a uniquely specialized Arctic predator. In the winter, it feeds on benthic prey, mostly flatfish, at depths of up to 1500 m under dense pack ice.[3] Narwhal have been harvested for over a thousand years by Inuit people in northern Canada and Greenland for meat and ivory, and a regulated subsistence hunt continues to this day. While populations appear stable, the narwhal has been deemed particularly vulnerable to climate change due to a narrow geographical range and specialized diet.[4]

The narwhal was one of the many species originally described by Linnaeus in his Systema Naturae.[5] Its name is derived from the Old Norse word nár, meaning "corpse", in reference to the animal's greyish, mottled pigmentation, like that of a drowned sailor.[6] The scientific name, Monodon monoceros, is derived from Greek: "one-tooth one-horn"[6] or "one-toothed unicorn".

The narwhal is most closely related to the beluga whale. Together, these two species comprise the only extant members of the Monodontidae family, sometimes referred to as the "white whales". The Monodontidae are distinguished by medium size (3-5 m in length), forehead melons, short snouts, and the absence of a true dorsal fin.[7] The white whales, dolphins (Delphinidae) and porpoises (Phocoenidae) together comprise the Delphinoidea superfamily, which are of likely monophyletic origin. Genetic evidence suggests the porpoises are more closely related to the white whales, and that these two families constitute a separate clade which diverged from the Delphinoidea within the past 11 million years.[8]

This narwhal skull has double tusks, a rare trait in narwhals. Usually, males have a single long tusk protruding from the incisor on the left side of the upper jaw. (Zoologisches Museum in Hamburg)

Male narwhals weigh up to 1,600 kilograms (3,500 lb), and the females weigh around 1,000 kilograms (2,200 lb). The pigmentation of the narwhal is a mottled black and white pattern. They are darkest when born and become whiter in color with age.[6][9]

The most conspicuous characteristic of the male narwhal is its single 2–3 meter (7–10 ft) long tusk, an incisor tooth that projects from the left side of the upper jaw and forms a left-handed helix. The tusk can be up to 3 meters (9.8 ft) long—compared with a body length of 4–5 meters (13–16 ft)—and weigh up to 10 kilograms (22 lb). About one in 500 males has two tusks, which occurs when the right incisor, normally small, also grows out. A female narwhal has a shorter, and straighter tusk.[10] She may also produce a second tusk, but this occurs rarely, and there is a single recorded case of a female with dual tusks.[11]

The most broadly accepted theory for the role of the tusk is as a secondary sexual characteristic, similar to the mane of a lion or the tail feathers of a peacock.[6] This hypothesis was notably discussed and defended at length by Charles Darwin, in The Descent of Man, and Selection in Relation to Sex (1871). It may help determine social rank, maintain dominance hierarchies, or help young males develop skills necessary for performance in adult sexual roles. Narwhals have rarely been observed using their tusk for fighting,[12] other aggressive behavior or for breaking sea ice in their Arctic habitat.[6] 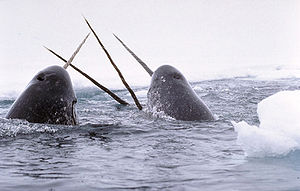 Narwhals have a relatively restricted and specialized diet. Their prey is predominantly composed of Greenland halibut, polar and Arctic cod, shrimp and Gonatus squid. Additional items found in stomachs have included wolffish, capelin, skate eggs and sometimes rocks, accidentally ingested when whales feed near the bottom.[3][13][14]

Narwhals exhibit seasonal migrations, with high fidelity of return to preferred, ice-free summering grounds, usually in shallow waters. In the winter, they are found primarily in offshore, deeper waters under thick pack ice, surfacing in narrow fissures in the sea ice, or leads.[14] Narwhals from Canada and West Greenland winter regularly in the pack ice of Davis Strait and Baffin Bay along the continental slope with less than 5% open water and high densities of Greenland halibut.[3] Feeding in the winter accounts for a much larger portion of narwhal energy intake than in the summer[3][14] and, as marine predators, they are unique in their successful exploitation of deep-water arctic ecosystems.

Most notable of their adaptations is the ability to perform deep dives. When on their wintering grounds, the narwhals make some of the deepest dives ever recorded for a marine mammal, diving to at least 800 meters (2,625 feet) over 15 times per day, with many dives reaching 1,500 meters (4,921 feet). Dives to these depths last around 25 minutes, including the time spent at the bottom and the transit down and back from the surface.[15] In the shallower summering grounds, narwhals dive to depths between 30 and 300 meters (90–900 feet).

Narwhals normally congregate in groups of about five to ten individuals. In the summer, several groups come together, forming larger aggregations. At times, male narwhals rub their tusks together in an activity called "tusking".[13] This behavior is thought to maintain social dominance hierarchies.[13] 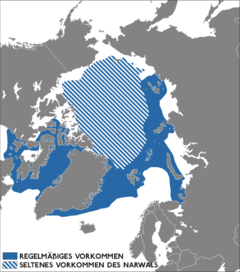 The frequent (solid) and rare (striped) occurrence of narwhal populations

The narwhal is found predominantly in the Atlantic and Russian areas of the Arctic Ocean. Individuals are commonly recorded in the northern part of Hudson Bay, Hudson Strait, Baffin Bay; off the east coast of Greenland; and in a strip running east from the northern end of Greenland round to eastern Russia (170° East). Land in this strip includes Svalbard, Franz Joseph Land, and Severnaya Zemlya.[6] The northernmost sightings of narwhal have occurred north of Franz Joseph Land, at about 85° North latitude.[6]

The world population is currently estimated to be around 75,000 individuals.[4] Most of the world's narwhals are concentrated in the fjords and inlets of Northern Canada and western Greenland.

Narwhals are a migratory species. In summer months, they move closer to coasts, usually in pods of 10-100. As the winter freeze begins, they move away from shore, and reside in densely packed ice, surviving in leads and small holes in the ice. As spring comes, these leads open up into channels and the narwhals return to the coastal bays.[4]

The only predators of narwhals besides humans are polar bears and killer whales (orcas). Inuit people are allowed to hunt this whale species legally for subsistence. The northern climate provides little nutrition in the form of vitamins, which can only be obtained through the consumption of seal, whale, and walrus. Almost all parts of the narwhal, meat, skin, blubber and organs are consumed. Mattak, the name for raw skin and blubber, is considered a delicacy, and the bones are used for tools and art.[6] In some places in Greenland, such as Qaanaaq, traditional hunting methods are used, and whales are harpooned from handmade kayaks. In other parts of Greenland and Northern Canada, high-speed boats and hunting rifles are used.[6] 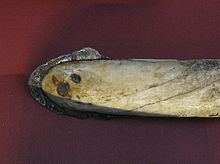 Narwhal have been found to be one of the most vulnerable arctic marine mammals to climate change. The study quantified the vulnerabilities of 11 year-round Arctic sea mammals.[4][16] Narwhals that have been brought into captivity tend to die of unnatural causes.[17]

In Inuit legend, the narwhal's tusk was created when a woman with a harpoon rope tied around her waist was dragged into the ocean after the harpoon had struck a large narwhal. She was transformed into a narwhal herself, and her hair, which she was wearing in a twisted knot, became the characteristic spiral narwhal tusk.[18]

Some medieval Europeans believed narwhal tusks to be the horns from the legendary unicorn.[19] As these horns were considered to have magic powers, such as the ability to cure poison and melancholia, Vikings and other northern traders were able to sell them for many times their weight in gold. The tusks were used to make cups that were thought to negate any poison that may have been slipped into the drink. During the 16th century, Queen Elizabeth received a carved and bejeweled narwhal tusk for £10,000—the cost of a castle (approximately £1.5—2.5 Million in 2007, using the retail price index).[20] The tusks were staples of the cabinet of curiosities.[21] The truth of the tusk's origin developed gradually during the Age of Exploration, as explorers and naturalists began to visit Arctic regions themselves. In 1555, Olaus Magnus published a drawing of a fish-like creature with a horn on its forehead, correctly identifying it as a "Narwal".[21] The narwhal was one of two possible explanations of the giant sea phenomenon written by Jules Verne in his book Twenty Thousand Leagues Under the Sea. The other possible explanation was a man-made vessel, but that was not likely in the opinion of the narrator.

Herman Melville wrote a section on the narwhal in Moby Dick, in which he claims a narwhal tusk hung for "a long period" in Windsor Castle after Sir Martin Frobisher had given it to Queen Elizabeth.[22]