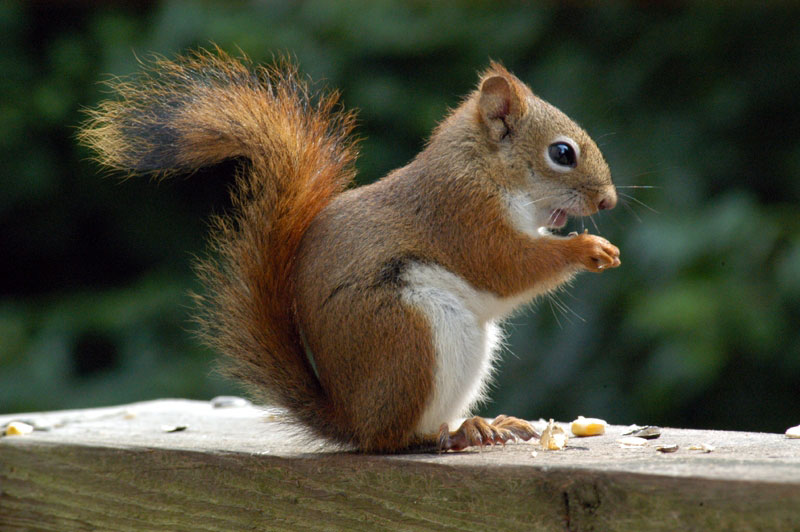 The American Red Squirrel ("Tamiasciurus hudsonicus") is one of two species of tree squirrel currently classified in the genus "" and known as pine squirrels (the other is the , "T. douglasii"). It is a medium sized (200–250g) diurnal mammal that defends a year-round exclusive territory. The diet of these tree squirrels is specialized on the seeds of cones. As such, they are widely distributed across wherever conifers are common, except on the Pacific coasts where they are replaced by Douglas squirrels. Recently American Red Squirrel have been expanding their range to include primarily hardwood areas (Goheen et al. 2003)

American Red Squirrels are also referred to as Pine Squirrels, North American Red Squirrels and Chickarees. They should not be confused with Eurasian red squirrels (""); since the ranges of these species do not overlap, they are both commonly referred to as "red squirrels" in the areas where they are native. The specific epithet "hudsonicus" refers to , Canada, where the species was first catalogued by Erxleben in 1771 (Woods 1988). Red squirrels can be easily identified from other North American tree squirrels by their smaller size, territorial behavior and reddish fur with a white venter (under-belly; Steele 1998). Red squirrels are also much bigger than . The Douglas squirrel is morphologically similar to the American red squirrels but has a rust venter and is restricted to the southwestern coast of British Columbia and in the Pacific Northwest of the United States. These two species do not co-occur.

American Red Squirrels are widely distributed across North America. Their range includes most of Canada, and extends into the United States in the Rocky Mountains, the North Central and North East. There are 25 recognized of red squirrels (Steele 1998). The sub-species of red squirrel found in the southwest Yukon is "T. hudsonicus petulans" (Osgood, 1900) (see Steele 1998). A recent (Mercer and Roth, 2003) suggests that squirrels as a family can be divided into five major lineages. Two of these s are monotypic. Red squirrels ("Tamiasciurus") fall within one of three remaining clades that includes flying squirrels and other tree squirrels (e.g. "Sciurus"). This clade is thought to have diverged from ground squirrels, chipmunks and marmots. See Mercer and Roth (2003) for details and interesting discussion of the climatic and tectonic events associated with these diversifications.

American Red Squirrels are abundant and not of conservation concern throughout much of their range. However, an isolated population of red squirrels in Arizona has experienced considerable declines in population size. In 1987 this portion of the population was listed as endangered.

American Red Squirrels are primarily s, but incorporate other food items into their diet opportunistically (Steele 1998). In the Yukon, extensive behavioral observations suggest that seeds ("Picea glauca") comprise over 50% of a red squirrel’s diet (McAdam & Boutin unpub. data), but squirrels have also been observed eating the following: spruce buds and needles, mushrooms, ("Salix sp.") leaves, ("Populus sp.") buds and catkins, ("Arctostaphylos sp.") flowers and berries, and animal material such as bird eggs (Willson, "et al." 2003). White spruce cones mature in late July and are harvested by red squirrels in August and September. These harvested cones are stored in a central cache and provide energy and nutrients for survival over the winter and reproduction the following spring. The fallen scales from consumed seed cones can collect in piles, called middens, more than a meter across. White spruce exhibits 2-6 year masting cycles, where a year of superabundant cone production (mast year; Kelly 1994) is followed by several years in which few cones are produced (Nienstaedt & Zasada 1990). American Red Squirrel territories may contain only one or several middens.

Nests are most commonly constructed of grass in the branches of spruce trees. Nests are also excavated from witches’ broom – abnormally dense vegetative growth resulting from a rust disease – or cavities in the trunks of spruce, poplar trees, and walnut. Kluane red squirrels rarely nest below ground. Each individual squirrel has several nests within its territory and females with young move offspring between nests. Some behavior has been reported within human dwellings using insulation as nesting fodder.

American Red Squirrels are spontaneous ovulators (Layne 1954, Millar 1970). Females enter for only one day, but venture from their territory prior to ovulation and these exploratory forays may serve to advertise their upcoming estrus. On the day of estrus, females are chased by several males in an extended mating chase. Males compete with one another for the opportunity to mate with the estrous female. Estrous females will mate with 4 – 16 males. Gestation time has been reported to range from 31 to 35 days (Lair 1985). Females can breed for the first time at one year of age but some females delay breeding until two years of age or older. Most females produce only one litter, but in some years reproduction is skipped while in other years some females attempted to breed twice. Litter sizes typically range from 1 to 5, but most litters contain 3 or 4 offspring. Offspring are pink and hairless at birth and weigh approximately 10g. Offspring grow at approximately 1.8 g/day while nursing but do not reach adult body size until 125 days of age. Offspring first emerge from their natal nest at around 42 days of age but continue to nurse until approximately 70 days

In the June 2008 issue of Animal Behavior, researchers, studying a population of red squirrels over a period of three years in southwest , reported that female red squirrels showed high levels of multimale mating and would even mate with males that had similar genetic relatedness, basically mating with their relatives. While males mating with multiple females is quite common in the animal kingdom, females that multi-mate is much harder to explain. Through their observations, it was noted that when female red squirrels chose a mate to copulate with, genetic relatedness did not play a factor. The researchers also found that the relatedness of parents had no effect on the neonatal mass and growth rate of their offspring, nor did it affect the survival rate of offspring to one year of age. [ [http://newswise.com/articles/view/541948/ Newswise: When It Comes to Female Red Squirrels, It Seems Any Male Will Do] Retrieved on June 22, 2008.]

Juvenile American Red Squirrel must acquire a territory and midden prior to their first winter. Juveniles without a midden do not survive their first winter. Offspring can acquire a territory by competing for a vacant territory, creating a new territory or by receiving all or part of a territory from their mother. This somewhat rare (15% of litters) female behavior is referred to as breeding dispersal or bequeathal and is a form of maternal investment in offspring (Berteaux and Boutin 2000). The prevalence of this behavior is related to the abundance of food resources and the age of the mother. In some cases females will acquire additional middens prior to reproduction, which they later bequeath to their offspring (Boutin et al 2000). Offspring that do not receive a midden from their mother typically settle within 150m (3 territory diameters) from their natal territory (Berteaux and Boutin 2000).

The American Red Squirrel has been found in a black phase and recently, a white phase (not albino) in Alaska.Fact|date=March 2008