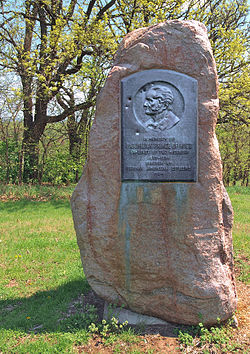 Prince Alexander Philipp Maximilian zu Wied-Neuwied (September 23, 1782 - February 3, 1867) was a German explorer, ethnologist and naturalist. Wied was born in Neuwied, the grandson of the ruling count (after 1784 prince) Johann Friedrich Alexander of Wied-Neuwied. Born at the end of the European Enlightenment, Maximilian became friends with two of its major figures: Johann Friedrich Blumenbach, a major comparative anthropologist under whom he studied biological sciences, and Alexander von Humboldt, who served as Maximilian's mentor. He joined the Prussian army in 1800 during the Napoleonic Wars, rising to the rank of major. He was given a leave of absence from the army in 1815 (prior to Napoleon's escape from Elba).

Wied led an expedition to southeast Brazil from 1815 to 1817. In 1816 he found the tribe of the Botocudos, about which he gave exact details for the first time. On account of the war among the different tribes of the country he was obliged to abandon his original route and remained for some time near some ruins that he had discovered. North of the Belmonte river he made his way through the woods, and after many difficulties arrived in the province of Minas Gerais. His delicate health forced him to abandon his expedition, and he was detained on unfounded suspicions for three days, and robbed of a large part of his collection of insects and plants. After this he resolved to leave the country, and embarked for Germany on 10 May 1817.[1] On his return, he wrote Reise nach Brasilien (1820–21) and Beiträge zur Naturgeschichte von Brasilien (1825–33).

In 1832 he travelled to the Great Plains region of North America, accompanied by the Swiss painter Karl Bodmer on a journey up the Missouri River, and wrote Reise in das Innere Nord-Amerikas (1840) on his return. During his travels, he was a sympathetic recorder of the cultures of many of the Native American tribes he encountered, notably the Mandan and the Hidatsa, who lived in settled villages on the banks of the Missouri, but also such nomadic peoples as the Sioux, Assinaboine, Plains Cree, Gros Ventres and Blackfoot. Bodmer's watercolour paintings of individuals, artefacts and customs among the Indians are acknowledged as among the most accurate and informative ever made. Many were adapted as hand-coloured engravings to illustrate the publication of 1840. Prince Maximilian collected many examples of ethnography, and a large number of specimens of flora and fauna of the area, still preserved in museum collections, notably in the Lindenmuseum, Stuttgart.[1]

The Genus Neuwiedia Blume (Orchidaceae) was named for him.