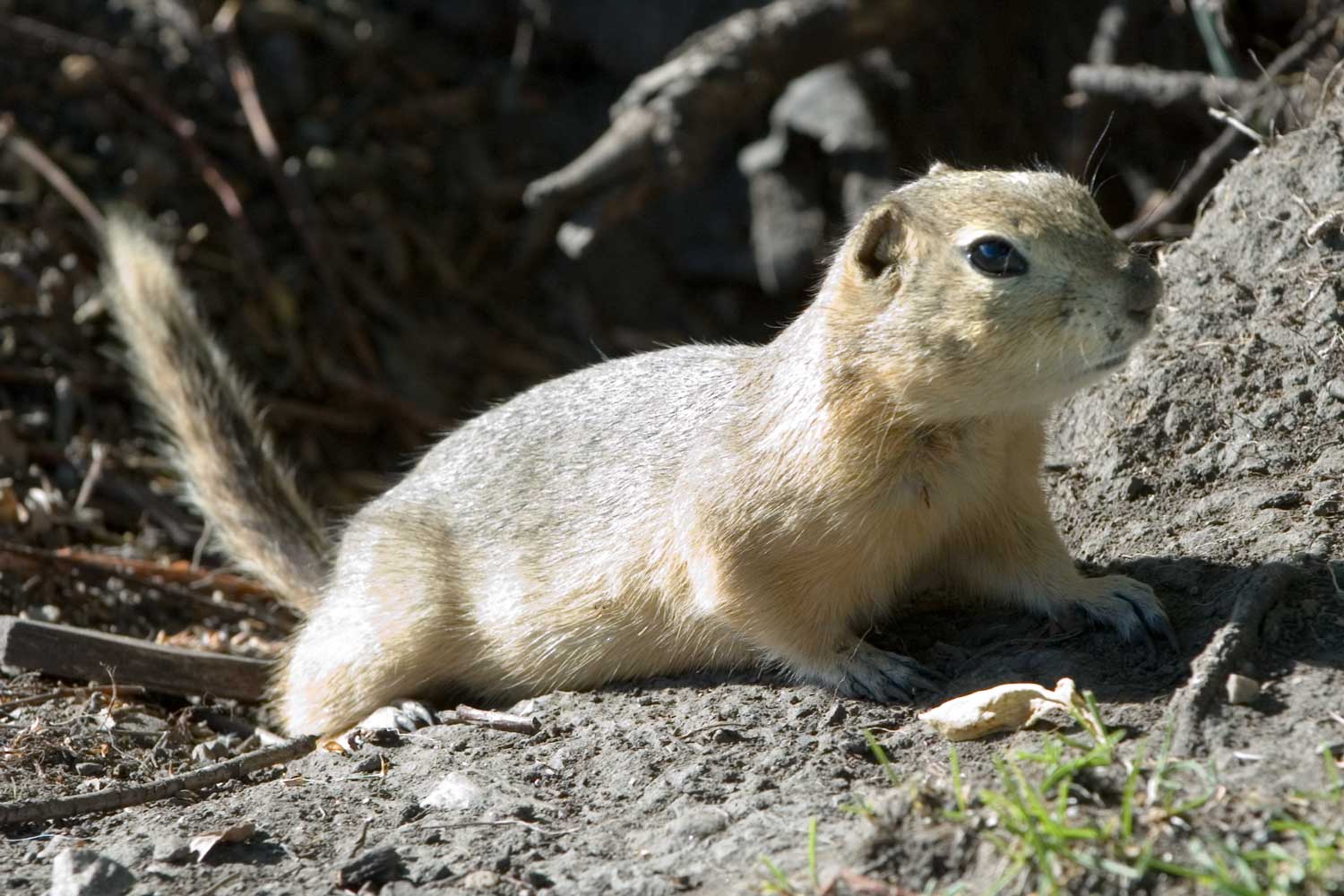 Richardson's Ground Squirrel ("Spermophilus richardsonii"), or the Flickertail, is a n in the genus "". Like a number of other ground squirrels, they are sometimes called "Dak Rats" or "gophers", though this name belongs more strictly to the s of family Geomyidae.

It was named after the Scottish naturalist Sir John Richardson. The in , Canada, has a large selection of stuffed ground squirrels of many varieties and colors. is nicknamed after the squirrel: The .

Native to the short grass s, Richardson's Ground Squirrel is found mainly in the northern states of the , such as , Texas, and in southern , such as southern and Southern . The range of this animal expanded as forests were cleared to create farm land. They are not simply restricted to prairie, sometimes adapting to suburban environments, causing them to be seen as pests from the burrows they dig.

Typical adults are about 30 cm long. Weights vary greatly with time of year and with location: at emergence from the squirrels weigh between 200 and 400 grams, but by the time they hibernate again this may have risen to nearly 750 grams; males are slightly larger and heavier than females on average. They are dark brown on the upper side and tan underneath. The tail is shorter and less bushy than in other ground squirrels, and the external ears are so short as to look more like holes in the animal's head. Behavior is more like that of a than a typical ground squirrel. The tail is constantly trembling, so the animal is sometimes called the "Flickertail".

alarm calls are given, and are responded to by other members of the colony. Offspring genetically have the same calls as their parents so parents can pick up on their own offspring's call when they are in danger.Fact|date=April 2008

Flickertails hibernate; adult Ground squirrels may hibernate as early as July, though in their first year, the young Ground squirrels do not hibernate until September. The males emerge from hibernation in March, and establish territories before the females emerge a couple of weeks later. The young, up to 8 in a litter, are born in April or May. Abandoned burrows are sometimes taken over by other grassland species such as the .

These animals are s, eating seeds, nuts, grains, grasses and insects. Predators include hawks, weasels, badgers and s. Because they will readily eat crop species, Richardson's Ground Squirrels are sometimes considered to be agricultural pests.

Farmers and ranchers have developed some ingenious ways of exterminating gophers besides trapping, shooting and poisoning. One enterprising person in uses a large modified sewage vacuum truck to suck gophers out of dens and into the truck's tank. Another person developed a process that fills the burrows with a mixture of oxygen and propane and then ignites the gas mixture which kills the gophers with a concussive force that also collapses the tunnel systems [cite web |url=http://www.reuters.com/article/oddlyEnoughNews/idUSN2432304520080324 |title=Gophers notch a win in man-rodent battle |publisher= |date=2008-03-24 |accessdate=2008-03-25] . While both solutions are effective, gophers from outside of the treated areas will eventually spread back into the area.

The Saskatchewan Wildlife Federation sponsored a 12-week "gopher derby" in 2002, in an effort to reduce what it considered an overpopulation of the squirrels. Cash prizes were awarded for the most number of animals killed, with the animals' tails being presented as proof of the kill. The Canadian Humane Society called the contest cruel and barbaric. [ [http://www.cbc.ca/canada/story/2002/06/22/gophers020622.html Humane society slams gopher-killing derby - CBC Saskatchewan] ] Despite the criticism, the derby was repeated in 2003. By 2004, the gopher population had dropped and the contest was cancelled.