Communion under both kinds

Communion under both kinds

Communion under both kinds in Roman Catholicism is the reception under both "species" (i.e., both the consecrated bread and wine) of the Eucharist.

In reference to the Eucharist as a sacrifice, Communion under both kinds belongs at least to the integrity and essence, of the rite, and may not be omitted without violating the precept of Christ: "Do this for a commemoration of me" (Luke 22:19). This is mentioned implicitly by the Council of Trent (Sess. XXI, c. i; XXII, c. i), and the General Instruction of the Roman Missal states that the people "...should share the cup when it is permitted. Then, Communion is a clearer sign of sharing in the sacrifice that is actually being celebrated." [1]

In modern Catholic practice in Europe and much of the English-speaking world, Communion is offered under both kinds when receiving at Mass. However, Catholicism teaches that Christ is sacramentally (and equally) present under each species, and therefore if a person receives only one species, Christ is fully present and nothing is lacking.[2]

Brief History of the practice in the Catholic Church

In the Early Church Communion was ordinarily administered and received under both kinds. That such was the practice mentioned by Paul in I Corinthians 11:28. But side by side in the Early Church there existed the custom of communicating in certain cases under one kind alone e.g. when people took home some of the Eucharist after Sunday worship and communicated during the week and also when the Eucharist was brought to the sick.

By the Middle Ages, the Church had become, like most of European society, increasingly hierarchical. There was much stress on being holy when receiving Communion, and a greatly heightened appreciation of the sufferings of Christ. This meant that all who approached the altar were to be as pure as possible, and inevitably led to the exclusion of the laity from administering the Eucharist, reserving the practice to the clergy. It is difficult to say when the practice of offering the chalice to the people stopped, but it may be presumed that this was part of the way in which Church authorities sought to prevent anything disrespectful happening to the Eucharist; it was also, by this time, that Communion was given only on the tongue.

The Council of Trent referred to the pope the question whether the petition of the German emperor to have the use of the chalice allowed in his dominions be granted; in 1564 Pius IV did grant this permission to some German bishops, provided certain conditions were fulfilled. However, his concession was withdrawn in the following year.

The Eastern Orthodox Church has consistently practised communion under both kinds. Both the clergy and the people normally receive in both kinds.

Communion of only the Eucharistic Bread is seen as imperfect by the Orthodox churches, who do not normally follow this practice, even in extremis.[3]

During the celebration of the Divine Liturgy, when it comes time for Holy Communion, the Lamb (a leavened Host) is first broken into four pieces: one portion is placed whole into the chalice; from one portion the clergy receive communion; and from the remaining two portions, the laity are Communed. The clergy will each receive first the Body of Christ, taking it in their hands, and then sip three times from the chalice. After the communion of the clergy, the portions of the consecrated Lamb for the faithful (i.e., the congregation) are cut into tiny portions and placed in the chalice. When the faithful come forward to receive Communion, they cross their hands over their chest, and the priest gives them both the Body and Blood of Christ from the chalice, using a spoon. In this manner, everyone receives in both kinds, but no one takes either the consecrated Bread or the Chalice in their hands, thus reducing the possibility of crumbs accidentally being dropped or any of the Blood of Christ being spilt on the floor.

When the priest takes Holy Communion to the sick, he transfers a portion to a vessel which is worn around the neck. Inside the vessel are compartments for a gilded box to contain the Mysteries, a tiny chalice, a bottle for wine, a small gilded spoon and often a gilded set of tweezers. Once at the sick person's bedside he uses the tweezers to take a particle of the Mysteries from the box and place it in the chalice. He then pours a small amount of unconsecrated red wine into the chalice which softens the dried particle as he hears the sick person's confession. Then, after saying the Prayers before Communion, he administers Holy Communion in both kinds to the sick person using the spoon, exactly as is done during the Divine Liturgy.

The 30th article of the 39 articles states: "The Cup of the Lord is not to be denied to the lay-people: for both the parts of the Lord's Sacrament, by Christ's ordinance and commandment, ought to be ministered to all Christian men alike."[4] 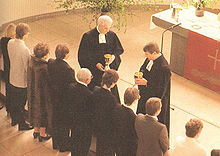 In the Latter Day Saint movement communion is taken under both kinds, similar to Protestant usage. As originally practiced by the Mormon founder Joseph Smith, Jr. and other early Mormons, the sacrament included the use of fermented wine.