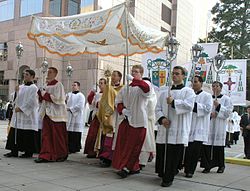 The Blessed Sacrament is displayed in a procession at the Diocese of Charlotte Eucharistic Congress in 2005. It is normally reserved in the tabernacle.

The Blessed Sacrament, or the Body and Blood of Christ, is a devotional name used in the Roman Catholic Church, Eastern Catholic Churches, Old Catholic, Anglican, and Lutheran churches, to refer to the Host after it has been consecrated in the sacrament of the Eucharist. Christians in these traditions believe in the Real Presence of Jesus Christ in the Eucharistic elements of the bread and wine and some of them, therefore, practice Eucharistic reservation and Eucharistic adoration. This belief is based on interpretations of biblical scripture and tradition. The Roman Catholic understanding is defined by numerous church councils including the Fourth Lateran Council and the Council of Trent and is quoted in the Catechism of the Catholic Church (which explains the meaning of Transubstantiation).[1]

The Blessed Sacrament may be received by Catholics who have undergone the First Holy Communion (ie., given by a priest or other Minister of the Eucharist to a Catholic and consumed by the communicant) as part of the Liturgy of the Eucharist during Mass. The soul of the person receiving the Eucharist should be in a "state of grace," i.e., have no mortal sin on their soul at the time of communion (Matt 5:23-24).

The Blessed Sacrament can also be exposed (displayed) on an altar in a Monstrance. Rites involving the exposure of the Blessed Sacrament include Benediction and Eucharistic adoration. According to Catholic theology, the host, after the Rite of Consecration, is no longer bread, but the Body and Blood, Soul and Divinity of Christ, who is transubstantiated in it. Catholics know that Jesus is the sacrificial Lamb of God prefigured in the Old Testament Passover. Unless the flesh of that passover sacrificial lamb was consumed, the members of the household would not be saved from death. As the Passover was the Old Covenant, so the Eucharist became the New Covenant. (Matt 26:26-28), (Mark 14:22-24), (Luke 22: 19-20), and (John 6:48-58)

Reception of the Blessed Sacrament in the Anglican Communion and other Anglican jurisdictions varies by province. Formerly, Confirmation was generally required as a precondition to reception, but many provinces now allow all the baptised to partake, as long as they are in good standing with the Church and have previously received First Communion.

In most Lutheran churches, a person must have had catechetical training prior to a First Communion (or have received Confirmation in the Lutheran Church) to receive the Eucharist. Recently, more liberal churches allow all who are baptized to received it. Similar to the Anglican teaching, Lutherans are also taught to genuflect or bow in the presence of the Blessed Sacrament, which is normally located on an altar. In the Lutheran churches that still celebrate the Corpus Christi, like the Roman Catholic Church, a Monstrance is used to display the Blessed Sacrament during the Benediction.

Lutheranism has its roots mostly in German cultural area and therefore the terminology may often historically differ slightly from general English use. Therefore traditionally the English term "Blessed Sacrament" has been substituted by "Sacrament of the Altar", (lat. Sanctissimum Sacramentum Altaris) which is used in the same meaning in Luther's Small Catechism. Later due to Reformed influence "The Sacrament of the Altar" has often been wrongly and misguidedly used as the term of the Eucharistic liturgy.