A chalice (from "calix", cup, borrowed from Greek "kalyx", shell, husk) is a goblet intended to hold drink. In general religious terms, it is intended for quaffing during a . 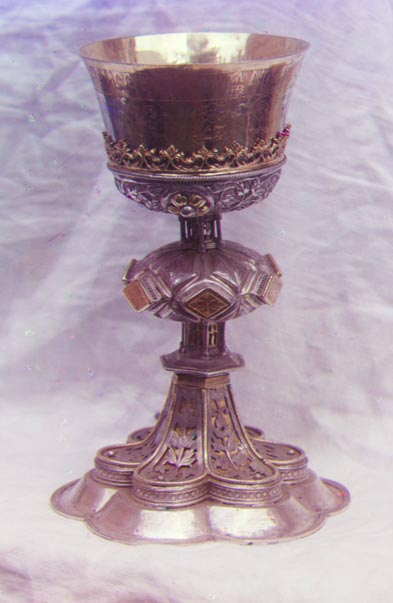 In , , , , and some other Christian denominations, a chalice is a standing cup used to hold during the (also called the Lord's Supper or ). Chalices are often made of precious metal, and they are sometimes richly enamelled and jewelled.

The ancient Roman "calix" was a drinking vessel consisting of a bowl fixed atop a stand, and was in common use at banquets. Chalices have been used since the . Because of Jesus' command to his disciples to "Do this in remembrance of me." (] Among the Eastern Churches there are varying practices regarding blessing. In some traditions the very act of celebrating the (Sacrament) is the only blessing necessary; in others, there is a special rite of blessing. In some Eastern traditions this blessing may be done only by a bishop, in some it may be done by a priest. In any case, in both the East and the West, once a chalice has been blessed, it may only be touched by an ordained member of the higher clergy (bishop, priest or deacon). In the a is permitted to touch the holy vessels, but only if they are wrapped in cloth.

In the ' is the vessel which Jesus used at the to serve the wine. New Testament texts make no mention of the cup except within the context of the and give no significance whatever to the object itself. Herbert Thurston in the "" 1908 concluded that "No reliable tradition has been preserved to us regarding the vessel used by Christ at the Last Supper. In the sixth and seventh centuries pilgrims to Jerusalem were led to believe that the actual chalice was still venerated in the church of the Holy Sepulchre, having within it the sponge which was presented to Our Saviour on Calvary." Several surviving standing cups of precious materials are identified in local traditions as the Chalice.

An entirely different and pervasive tradition concerns the cup of the "Last Supper". In this highly muddled though better-known version, the vessel is known as . In this legend, the cup was used to collect and store the blood of Christ at the Crucifixion. This conflicts with the notion that Peter might have used the cup of the "" to celebrate the .

"", a modern fiction by , suggested that a chalice represents the womb of a woman, and that the term "Holy Grail" ("san gral") means the "holy blood" rather than a drinking vessel.

At the opening of Unitarian Universalist worship services, many congregations light a flame inside a chalice. [Citation | last =Unitarian Universalist Association of Congregations | title =Our Symbol: the Flaming Chalice | date =March 1 | year =2007 | url =http://www.uua.org/visitors/6901.shtml | accessdate =2007-07-19] A is the most widely used symbol of and (UU), and the official logo of the (UUA) and other Unitarian and UU churches and societies. [Unitarian Universalist Association, [http://www.uua.org/aboutuu/chalice.html "The History of the Flaming Chalice"] ] The design was originated by the artist Hans Deutsch, who took his inspiration from the chalices of oil burned on ancient Greek and Roman s. It became an underground symbol in during for assistance to help Unitarians, Jews, and other people escape persecution. [Citation | last =uuworld.org—liberal religion and life | title =Wartime origins of the flaming chalice | url =http://www.uua.org/visitors/6901.shtml | accessdate =2007-07-19] The chalice is often shown surrounded by two linked rings The two linked rings were used as an early symbol for the Unitarian Universalist Association, signifying the joining of Unitarianism and Universalism. There is no standardized interpretation of the flaming chalice symbol. In one interpretation, the chalice is a symbol of religion freedom from the impositions of doctrine by a hierarchy and openness to participation by all; the flame is interpreted as a memorial to those throughout history who sacrificed their lives for the cause of religious liberty. In another interpretation, the flaming chalice resembles a cross, symbolic of the Christian roots of Unitarian Universalism. [Citation | last =Unitarian Universalist Association | title =The History of the Flaming Chalice | year =2007 | url =http://www.uua.org/aboutuu/chalice.html | accessdate =]

In a chalice, as a feminine principle, is often used in combination with the (ceremonial black-handled knife), as male principle. Combining the two evokes the act of procreation, as a symbol of universal creativity. This is a symbol of the in rituals. A chalice is also used in the .

Some forms of make use of chalices in their rituals as well. A chalice may be placed on an or on the ground. The chalice may contain wine, , water, or other liquids.

The term "poisoned chalice" is applied to a thing or situation which appears to be good when it is received or experienced by someone, but then becomes or is found to be bad. The idea was referred to by in one of his s, found on the : "Vade retro Satana! Nunquam suade mihi vana! Sunt mala quae libas. Ipse venena bibas!" (Begone Satan! Never tempt me with your vanities! What you offer me is evil. Drink the poison yourself!).

uses the expression in Act I Scene VII of . It occurs in the opening soliloquy of the scene when Macbeth is considering the ramifications of the murder he is plotting.

But in these cases
We still have judgment here; that we but teach
Bloody instructions, which, being taught, return
To plague the inventor: this even-handed justice
Commends the ingredients of our poison'd chalice
To our own lips.

The use of chalices as s is not unusual, especially in . A number of cities and regions also make use of the chalice. For instance, the of the municipality of in the district of Prättigau/Davos in the Swiss canton of , bears a gold chalice on a solid blue background. 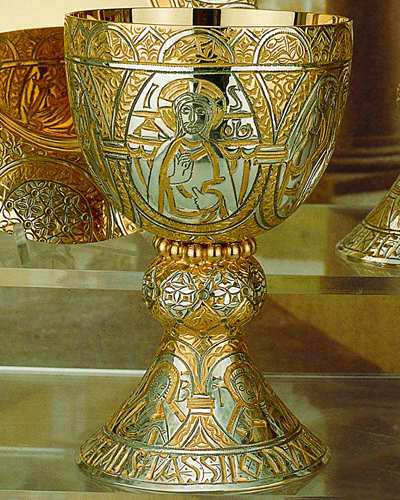 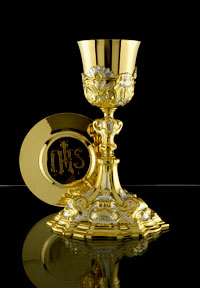 chalice with a paten 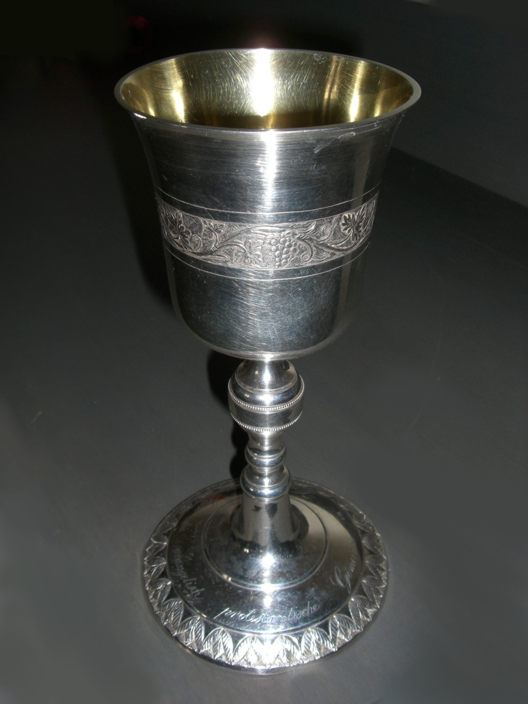 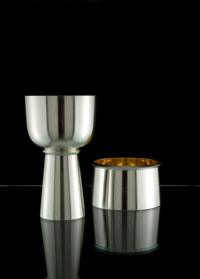 In French-Canadian culture, particularly in and around Quebec, the use of the names of holy objects such as "chalice" can be an alternate form of cursing. Somewhat equivalent to the American word "goddam" or the phrase "God damn it", the use of "chalice" or "tabernacle" as an interjection is not uncommon in Quebec. For example: "Chalice! I forgot to lock the front door" or muttering "tabernacle" under your breath after you get a flat tire. Presumably a derivation of "taking the Lord's name in vain" in the context of "Jesus Christ! Now What?" or similar outbursts. [Quebec swears by its English curses: But church-related expletives spoken in French not accepted on TV by Sean Gordon ]