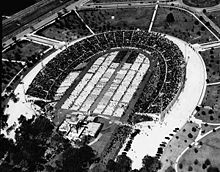 In the Roman Catholic church, a Eucharistic Congress is a gathering of clergy, religious, and laity to bear witness to the Real Presence of Jesus in the Eucharist, which is an important Roman Catholic doctrine. Congresses bring together people from a wide area, and typically involve large open-air Masses, adoration of the Eucharist (Blessed Sacrament), and other devotional ceremonies held over several days. There are National and International Eucharistic Congresses.

The first International Eucharistic Congress owed its inspiration to Bishop Gaston de Ségur, and was held at Lille, France, 21 June 1881. The idea at first was merely local and met with few adherents, but it grew from year to year with an ever-increasing importance. The sixth congress met in Paris, 2–6 July 1888, and the great memorial church of the Sacred Heart on Montmartre was the centre of the proceedings. Antwerp entertained the next congress, 15–21 August 1890; an immense altar of repose was erected in the Place de Meir, and an estimated 150,000 persons were gathered about it when Cardinal Goossens, Archbishop of Mechlin, gave the solemn Benediction. Bishop Doutreloux of Liège was then president of the Permanent Committee for the Organization of Eucharistic Congresses, the body which has charge of the details of these meetings. Of special importance also was the eighth congress, held in Jerusalem in 1893.

In 1907, the congress was held in Metz, Lorraine, and the German Government suspended the law of 1870 (which forbade processions), in order that the usual solemn procession of the Blessed Sacrament might be held. Each year the congress had become more and more definitely international, and at the invitation of Archbishop Bourne of Westminster it was decided to hold the nineteenth congress in London, the first among English-speaking members of the Church.

The presidents of the Permanent Committee of the International Eucharistic Congresses, under whose direction all this progress was made, were: Bishop Gaston de Ségur of Lille; Archbishop de La Bouillerie, titular of Perga and coadjutor of Bordeaux; Archbishop Duquesnay of Cambrai; Cardinal Mermillod, Bishop of Lausanne and Geneva; Bishop Doutreloux of Liège, and Bishop Thomas Heylen of Namur, Belgium. After each congress this committee prepared and published a volume giving a report of all the papers read and the discussions on them in the various sections of the meeting, the sermons preached, the addresses made at the public meetings, and the details of all that transpired.

The 23rd International Eucharistic Congress was held in Vienna in 1912.

In 1926 the 28th International Eucharistic Congress was held in Chicago from June 20–24. Cardinal Bonzano was the papal legate and the host was George Cardinal Mundelein, Archbishop of Chicago. Mass for a crowd estimated at 500,000 was held at the recently completed Soldier Field Stadium. Closing mass at St. Mary's of the Lake Seminary had nearly a million worshipers.

In 1932 the 31st International Eucharistic Congress was held in Dublin from June 22 to June 26, that year being the 1500th anniversary of Saint Patrick's arrival. Ireland was then home to 3,171,697 Catholics, and the chosen theme was "The Propagation of the Sainted Eucharist by Irish Missionaries."[1]

In 1976 the 41st International Eucharistic Congress was held in Philadelphia in August, that year being the 200th anniversary of independence for the United States. The theme was Jesus, the bread of life. John Cardinal Krol was Philadelphia's Archbishop. The Mass held at Municipal (J.F. Kennedy) Stadium was attended by U.S. president Gerald R. Ford.

The 48th International Eucharistic Congress was held in Guadalajara, Jalisco, Mexico from 10 to 17 October 2004. Pope John Paul II, being too ill to attend, named Cardinal Josef Tomko as Papal Legate. The Congress ended with a celebration of the Mass in the Jalisco Stadium in Guadalajara, with a live link up between that Mass, and a simultaneous Mass celebrated in St Peter's Basilica in Rome in the presence of Pope John Paul II. These simultaneous Masses marked the beginning of the Year of the Eucharist which ran from the International Eucharistic Congress to the Synod of Bishops in October 2005. At the end of the Mass, the Pope announced the location of the next Congress.

In May 2007, a Youth Summit was held at the University of Laval in preparation for the 49th International Eucharistic Congress. This took place in Quebec City, 15–22 June 2008, commemorating the 400th anniversary of the city's founding.[2] The theme of the Congress was "The Eucharist, Gift of God for the Life of the World".[2] The closing celebration took place on the Plains of Abraham, attended by tens of thousands of pilgrims.[3] Pope Benedict XVI's message was broadcast live, in both French and English, from the Apostolic Palace in the Vatican, via giant screens set up on the meadow.[3] The Pope announced the next Congress was to take place in Dublin, in 2012:

Dear Friends, as this significant event in the life of the Church draws to a close I invite you to join me in praying for the Success of the next International Eucharistic Congress, which will take place in 2012 in the city of Dublin! I take this opportunity to greet warmly the people of Ireland, as they prepare to host this ecclesial gathering. I am confident that they, together with all the participants at the next Congress, will find it a source of lasting spiritual renewal.[3]

The 50th International Eucharistic Congress will take place in Dublin (Ireland) from 10 June to 17th 2012. It coincides with the 50th anniversary of the inauguration of the Second Vatican Council. The theme of the Congress, drawn from Lumen gentium, 7 is: The Eucharist: Communion with Christ and with one another. The Congress is more than just an event in 2012. In an interview with Vatican Radio, Fr. Kevin Doran, Secretary General of the Congress explains that people are being invited to take place in a journey of pastoral preparation in advance of the Congress.[4] Most of the Congress activities in 2012 will take place at the RDS Royal Dublin Society, venue for Dublin's famous International Horse Show. The Statio Orbis (Closing Ceremony) will take place at Ireland's premier sports stadium, Croke Park. Prospects of a visit to Ireland by the pope to coincide with the congress receded in July 2011 following public expressions of anger directed by the Irish Government at the Vatican following the child sexual abuse scandal in Cloyne diocese.[5] The papal nuncio was recalled from Dublin to Rome following an attack on the Vatican by the taoiseach in Dáil Éireann.[6]

In 1937, the sixth National Eucharistic Conference was held in Madras. Silver Souvenir medals with scalloped edges, with the inscription ADOREMUS IN AETERNUM SANCTISSIMUM SACRAMENTUM were made available at the time. This inscription was around the scalloped edges with the picture of the Holy Eucharist and the Vatican in the background. At the back of the medal was inscribed SOUVENIR OF THE SIXTH NATIONAL EUCHARIST CONGRESS MADRAS, 1937.