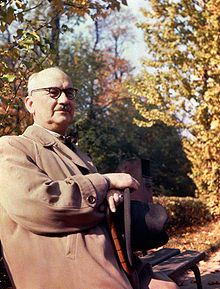 Dufaycolor is an early French and British additive color photographic film process for motion pictures and stills photography. It was based on a four-color screen photographic process invented in 1908 by Frenchman Louis Dufay. Dufaycolor worked on the same principles as the Autochrome process, but achieved its result using a slightly different method.[1]

The film base was dyed blue, printed with a mosaic using a resistive greasy ink and bleached. The resulting spaces were then dyed green. The process was repeated at an angle, the new spaces being bleached and dyed red, forming a mosaic of color filters consisting of a mesh of red, green and blue lines, at approximately one million color elements per square inch, known as a reseau.[2] When exposed to light through the reseau, the film's emulsion was exposed to a single color of light. Thus the emulsion behind each color element recorded the tones for each primary color.[3]

Upon projection, the reseau served to filter the white projected light, so that the colors of the photograph corresponded to those in the recorded scene; for example, red values were only shown in red. The same principle applied to green and blue components.

In 1926, the Dufaycolor process was purchased by British paper manufacturing firm Spicers. The firm then funded research to turn Dufaycolor into a workable color motion picture film process. In 1932, Spicers finally released Dufaycolor as a motion picture process.[4]

Use in motion pictures

Dufaycolor was used in only two British-made feature films; Radio Parade of 1935 (1934) for two sequences, and Sons of the Sea (1939), an all-color film directed by Maurice Elvey.[4] Dufaycolor was also used in some short films; Len Lye, for instance, used Dufaycolor for his short films Kaleidoscope (1935), A Colour Box (1935), and Swinging the Lambeth Walk (1940).

Although less expensive than Technicolor, Dufaycolor was still expensive in comparison to black-and-white film. As color became more common in motion pictures, Dufaycolor was superseded by technologically superior processes, such as Technicolor and Kodachrome. Dufaycolor remained the only successfully implemented additive film stock for motion pictures until Polaroid designed a system using similar principles in the 1970s.[3]