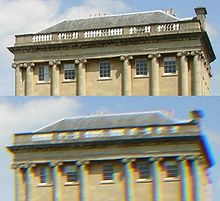 In optics, chromatic aberration (CA, also called achromatism or chromatic distortion) is a type of distortion in which there is a failure of a lens to focus all colors to the same convergence point. It occurs because lenses have a different refractive index for different wavelengths of light (the dispersion of the lens). The refractive index decreases with increasing wavelength.

Chromatic aberration manifests itself as "fringes" of color along boundaries that separate dark and bright parts of the image, because each color in the optical spectrum cannot be focused at a single common point. Since the focal length f of a lens is dependent on the refractive index n, different wavelengths of light will be focused on different positions.

There are two types of chromatic aberration, axial (longitudinal), and transverse (lateral). Axial aberration occurs when different wavelengths of light are focused at different distances from the lens, i.e. different points on the optical axis (focus shift). Transverse aberration occurs when different wavelengths are focused at different positions in the focal plane (because the magnification and/or distortion of the lens also varies with wavelength; indicated in graphs as (change in) focus length). The acronym LCA is used, but ambiguous, and may refer to either longitudinal or lateral CA; for clarity, this article uses "axial" (shift in the direction of the optical axis) and "transverse" (shift perpendicular to the optical axis, in the plane of the sensor or film).

These two types have different characteristics, and may occur together. Axial CA occurs throughout the image, and is reduced by stopping down (this increases depth of field, so though the different wavelength focus at different distances, they are still in acceptable focus). Transverse CA does not occur in the center, and increases towards the edge, but is not affected by stopping down.

In digital sensors, axial CA results in the red and blue planes being defocused (assuming that the green plane is in focus), which is relatively difficult to remedy in post-processing, while transverse CA results in the red, green, and blue planes being at different magnifications (magnification changing along radii, as in geometric distortion), and can be corrected by scaling the planes appropriately so they line up.

In the earliest uses of lenses, chromatic aberration was reduced by increasing the focal length of the lens where possible. For example, this could result in extremely long telescopes such as the very long aerial telescopes of the 17th century. Isaac Newton's theories about white light being composed of a spectrum of colors led him to the conclusion that uneven refraction of light caused chromatic aberration (leading him to build the first reflecting telescope, his Newtonian telescope, in 1668[1]).

There exists a point called the circle of least confusion, where chromatic aberration can be minimized. It can be further minimized by using an achromatic lens or achromat, in which materials with differing dispersion are assembled together to form a compound lens. The most common type is an achromatic doublet, with elements made of crown and flint glass. This reduces the amount of chromatic aberration over a certain range of wavelengths, though it does not produce perfect correction. By combining more than two lenses of different composition, the degree of correction can be further increased, as seen in an apochromatic lens or apochromat. Note that "achromat" and "apochromat" refer to the type of correction (2 or 3 wavelengths correctly focused), not the degree (how defocused the other wavelengths are), and an achromat made with sufficiently low dispersion glass can yield significantly better correction than an achromat made with more conventional glass. Similarly, the benefit of apochromats is not simply that they focus 3 wavelengths sharply, but that their error on other wavelength is also quite small.

Many types of glass have been developed to reduce chromatic aberration. These are low dispersion glass, most notably, glasses containing fluorite. These hybridized glasses have a very low level of optical dispersion; only two compiled lenses made of these substances can yield a high level of correction.

The use of achromats was an important step in the development of the optical microscope and in telescopes.

For a doublet consisting of two thin lenses in contact, the Abbe number of the lens materials is used to calculate the correct focal length of the lenses to ensure correction of chromatic aberration. If the focal lengths of the two lenses for light at the yellow Fraunhofer D-line (589.2 nm) are f1 and f2, then best correction occurs for the condition:

where V1 and V2 are the Abbe numbers of the materials of the first and second lenses, respectively. Since Abbe numbers are positive, one of the focal lengths must be negative, i.e., a diverging lens, for the condition to be met.

The overall focal length of the doublet f is given by the standard formula for thin lenses in contact:

and the above condition ensures this will be the focal length of the doublet for light at the blue and red Fraunhofer F and C lines (486.1 nm and 656.3 nm respectively). The focal length for light at other visible wavelengths will be similar but not exactly equal to this.

Chromatic aberration is used during an eye test to ensure that a correct lens power has been selected. The patient is confronted with red and green images and asked which is sharper. If the prescription is right, then the cornea, lens and prescribed lens will focus the red and green wavelengths just in front, and behind the retina, appearing of equal sharpness. If the lens is too powerful or weak, then one will focus on the retina, and the other will be much more blurred in comparison.

Image processing to reduce the appearance of lateral chromatic aberration

In some circumstances it is possible to correct some of the effects of chromatic aberration in digital post-processing. However in real-world circumstances, chromatic aberration results in permanent loss of some image detail. Detailed knowledge of the optical system used to produce the image can allow for some useful correction. In an ideal situation, post-processing to remove or correct lateral chromatic aberration would involve scaling the fringed color channels, or subtracting some of a scaled versions of the fringed channels, so that all channels spatially overlap each other correctly in the final image.

As chromatic aberration is complex (due to its relationship to focal length, etc.) some camera manufacturers employ lens-specific chromatic aberration appearance minimization techniques. All Nikon DSLRs with CMOS sensors and all Panasonic Lumix DSLRs, additionally some Nikon and Panasonic compact cameras, do such processing automatically in camera for JPEG images. Nikon DSLRs additionally store correction-data in RAW-files for use by Nikon Capture, View NX and some other RAW tools. Due to the Canon EF lens mount all-electronic lens communication and coupling system, the Canon's Digital Photo Professional software has one of the most advanced chromatic aberration appearance minimization (also vignetting and distortion handling) systems that uses lens model-specific focusing distance, focal length and aperture information stored in the Canon RAW (CR2) files. Third party software tools such as PTLens are also capable of performing complex chromatic aberration appearance minimization with their large database of cameras and lens.

The above are closely related to the specific scene that is captured so no amount of programming and knowledge of the capturing equipment (e.g., camera and lens data) can overcome these limitations.

Severe purple fringing can be seen at the edges of the horse's forelock, mane, and ear.

The term "purple fringing" is commonly used in photography, although not all purple fringing can be attributed to chromatic aberration. Similar colored fringing around highlights may also be caused by lens flare. Colored fringing around highlights or dark regions may be due to the receptors[clarification needed] for different colors having differing dynamic range or sensitivity -- therefore preserving detail in one or two color channels, while "blowing out" or failing to register, in the other channel or channels. On digital cameras, the particular demosaicing algorithm is likely to affect the apparent degree of this problem. Another cause of this fringing is chromatic aberration in the very small microlenses used to collect more light for each CCD pixel; since these lenses are tuned to correctly focus green light, the incorrect focusing of red and blue results in purple fringing around highlights. This is a uniform problem across the frame, and is more of a problem in CCD's with a very small pixel pitch such as those used in compact cameras. Some cameras, such as the Panasonic Lumix series and newer Nikon DSLRs, feature a processing step specifically designed to remove it.

On photographs taken using a digital camera, very small highlights may frequently appear to have chromatic aberration where in fact the effect is because the highlight image is too small to stimulate all three color pixels, and so is recorded with an incorrect color. This may not occur with all types of digital camera sensor. Again, the de-mosaicing algorithm may affect the apparent degree of the problem.

Chromatic aberration also affects black-and-white photography. Although there are no colors in the photograph, chromatic aberration will blur the image. It can be reduced by using a narrow-band color filter, or by converting a single color channel to black and white. This will, however, require longer exposure. (This is only true with panchromatic black-and-white film, since orthochromatic film is already sensitive to only a limited spectrum.)