A photograph of the sea after sunset with an exposure time of 15 seconds. The swell from the waves appears as fog.

In photography, exposure is the total density of light allowed to fall on the photographic medium (photographic film or image sensor) during the process of taking a photograph. Exposure is measured in lux seconds, and can be computed from exposure value (EV) and scene luminance over a specified area.

Photometric or luminous exposure[1] Hv is the accumulated physical quantity of visible light energy (weighted by the luminosity function) applied to a surface during a given exposure time. It is defined as:[2]

The radiometric quantity radiant exposure[3] He is sometimes used instead; it is the product of image-plane irradiance Ee and time, the accumulated amount of incident "light" energy per area:[4]

If the measurement is adjusted to account only for light that reacts with the photo-sensitive surface, that is, weighted by the appropriate spectral sensitivity, the exposure is still measured in radiometric units (joules per square meter), rather than photometric units (weighted by the nominal sensitivity of the human eye).[5] Only in this appropriately weighted case does the H measure the effective amount of light falling on the film, such that the characteristic curve will be correct independent of the spectrum of the light.

Many photographic materials are also sensitive to "invisible" light, which can be a nuisance (see UV filter and IR filter), or a benefit (see infrared photography and full-spectrum photography). The use of radiometric units is appropriate to characterize such sensitivity to invisible light.

In sensitometric data, such as characteristic curves, the log exposure[2] is conventionally expressed as log10(H). Photographers more familiar with base-2 logarithmic scales (such as exposure values) can convert using log2(H) ≈ 3.32 log10(H).

"Correct" exposure may be defined as an exposure that achieves the effect the photographer intended.[6]

A more technical approach recognises that a photographic film (or sensor) has a physically limited useful exposure range,[7] sometimes called its dynamic range.[8] If, for any part of the photograph, the actual exposure is outside this range, the film cannot record it accurately. In a very simple model, for example, out-of-range values would be recorded as "black" (underexposed) or "white" (overexposed) rather than the precisely graduated shades of colour and tone required to describe "detail". Therefore, the purpose of exposure adjustment (and/or lighting adjustment) is to control the physical amount of light from the subject that is allowed to fall on the film, so that 'significant' areas of shadow and highlight detail do not exceed the film's useful exposure range. This ensures that no 'significant' information is lost during capture.

It is worth noting that the photographer may carefully overexpose or underexpose the photograph to eliminate 'insignificant' or 'unwanted' detail; to make, for example, a white altar cloth appear immaculately clean, or to emulate the heavy, pitiless shadows of film noir. However, it is technically much easier to discard recorded information during post processing than to try to 're-create' unrecorded information.

In a scene with strong or harsh lighting, the ratio between highlight and shadow luminance values may well be larger than the ratio between the film's maximum and minimum useful exposure values. In this case, adjusting the camera's exposure settings (which only applies changes to the whole image, not selectively to parts of the image) only allows the photographer to choose between underexposed shadows or overexposed highlights; it cannot bring both into the useful exposure range at the same time. Methods for dealing with this situation include: using some kind of fill lighting to gently increase the illumination in shadow areas; using a graduated ND filter or gobo to reduce the amount of light coming from the highlight areas; or varying the exposure between multiple, otherwise identical, photographs (exposure bracketing) and then combining them afterwards in some kind of HDRI process. 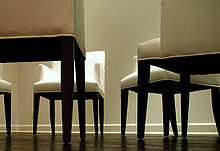 White chair: Deliberate use of overexposure for aesthetic purposes.

A photograph may be described as overexposed when it has a loss of highlight detail, that is, when important bright parts of an image are "washed out" or effectively all white, known as "blown out highlights" or "clipped whites".[9] A photograph may be described as underexposed when it has a loss of shadow detail, that is, when important dark areas are "muddy" or indistinguishable from black,[10] known as "blocked up shadows" (or sometimes "crushed shadows," "crushed blacks," or "clipped blacks," especially in video).[11][12][13] As the image to the right shows, these terms are technical ones rather than artistic judgments; an overexposed or underexposed image may be "correct", in that it provides the effect that the photographer intended. Intentionally over- or under- exposing (relative to a standard or the camera's automatic exposure) is casually referred to as "shooting to the right" or "shooting to the left", respectively, as these shift the histogram of the image to the right or left.

'Manual' exposure calculations may be based on some method of light metering with a working knowledge of exposure values, the APEX system and/or the Zone System.

A camera in automatic exposure (abbreviation: AE) mode automatically calculates and adjusts exposure settings to match (as closely as possible) the subject's mid-tone to the mid-tone of the photograph. For most cameras this means using an on-board TTL exposure meter.

Aperture priority mode (commonly abbreviated to Av) gives the photographer manual control of the aperture, whilst the camera automatically adjusts the shutter speed to achieve the exposure specified by the TTL meter. Shutter priority mode (commonly abbreviated to Tv) gives manual shutter control, with automatic aperture compensation. In each case, the actual exposure level is still determined by the camera's exposure meter.

The purpose of an exposure meter is to estimate the subject's mid-tone luminance and indicate the camera exposure settings required to record this as a mid-tone. In order to do this it has to make a number of assumptions which, under certain circumstances, will be wrong. If the exposure setting indicated by an exposure meter is taken as the "reference" exposure, the photographer may wish to deliberately overexpose or underexpose in order to compensate for known or anticipated metering inaccuracies.

Cameras with any kind of internal exposure meter usually feature an exposure compensation setting which is intended to allow the photographer to simply offset the exposure level from the internal meter's estimate of appropriate exposure. Frequently calibrated in stops,[14] also known as EV units,[15] a "+1" exposure compensation setting indicates one stop more (twice as much) exposure and "–1" means one stop less (half as much) exposure.[16][17]

An appropriate exposure for a photograph is determined by the sensitivity of the medium used. For photographic film, sensitivity is referred to as film speed and is measured on a scale published by the International Organization for Standardization (ISO). Faster film, that is, film with a higher ISO rating, requires less exposure to make a good image. Digital cameras usually have variable ISO settings that provide additional flexibility. Exposure is a combination of the length of time and the illuminance at the photosensitive material. Exposure time is controlled in a camera by shutter speed and the illuminance by the lens aperture and the scene luminance. Slower shutter speeds (exposing the medium for a longer period of time), and greater lens apertures (admitting more light), and higher-luminance scenes produce greater exposures.

A scene can be exposed in many ways, depending on the desired effect a photographer wishes to convey.

An important principle of exposure is reciprocity. If one exposes the film or sensor for a longer period, a reciprocally smaller aperture is required to reduce the amount of light hitting the film to obtain the same exposure. For example, the photographer may prefer to make his sunny-16 shot at an aperture of f/5.6 (to obtain a shallow depth of field). As f/5.6 is 3 stops "faster" than f/16, with each stop meaning double the amount of light, a new shutter speed of (1/125)/(2·2·2) = 1/1000 is needed. Once the photographer has determined the exposure, aperture stops can be traded for halvings or doublings of speed, within limits.

A demonstration of the effect of exposure in night photography. Longer shutter speeds result in increased exposure.

Digital camera image sensors can also be subject to a form of reciprocity failure.[18]

A fair ride taken with a 2/5 second exposure.

The Zone System is another method of determining exposure and development combinations to achieve a greater tonality range over conventional methods by varying the contrast of the 'film' to fit the print contrast capability. Digital cameras can achieve similar results (high dynamic range) by combining several different exposures (varying only the shutter speeds) made in quick succession.

Today, most cameras automatically determine the correct exposure at the time of taking a photograph by using a built-in light meter, or multiple point meters interpreted by a built-in computer, see metering mode.

Negative/Print film tends to bias for exposing for the shadow areas (film dislikes being starved of light), with digital favouring exposure for highlights. See latitude below.

Latitude is the degree by which one can over, or under expose an image, and still recover an acceptable level of quality from an exposure. Typically negative film has a better ability to record a range of brightness than slide/transparency film or digital. Digital should be considered to be the reverse of print film, with a good latitude in the shadow range, and a narrow one in the highlight area; in contrast to film's large highlight latitude, and narrow shadow latitude. Slide/Transparency film has a narrow latitude in both highlight and shadow areas, requiring greater exposure accuracy. 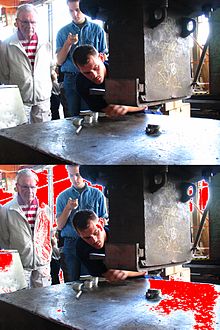 Areas of a photo where information is lost due to extreme brightness are described as having "blown-out highlights" or "flared highlights".

In digital images this information loss is often irreversible, though small problems can be made less noticeable using photo manipulation software. Recording to RAW format can ameliorate this problem to some degree, as can using a digital camera with a better sensor.

Film can often have areas of extreme overexposure but still record detail in those areas. This information is usually somewhat recoverable when printing or transferring to digital.

A loss of highlights in a photograph is usually undesirable, but in some cases can be considered to "enhance" appeal. Examples include black-and-white photography and portraits with an out-of-focus background.

Areas of a photo where information is lost due to extreme darkness are described as "crushed blacks". Digital capture tends to be more tolerant of underexposure, allowing better recovery of shadow detail, than same-ISO negative print film.

Crushed blacks cause loss of detail, but can be used for artistic effect.