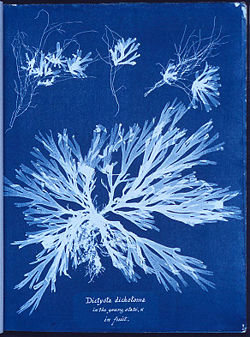 Cyanotype is a photographic printing process that gives a cyan-blue print. The process was popular in engineering circles well into the 20th century. The simple and low-cost process enabled them to produce large-scale copies of their work, referred to as blueprints. Two chemicals are used in the process:

The English scientist and astronomer Sir John Herschel discovered this procedure in 1842.[1] Though the process was developed by Herschel, he considered it as mainly a means of reproducing notes and diagrams, as in blueprints.[2] It was Anna Atkins who brought this to photography. She created a limited series of cyanotype books that documented ferns and other plant life from her extensive seaweed collection.[3] Atkins placed specimens directly onto coated paper, allowing the action of light to create a sillhouette effect. By using this photogram process, Anna Atkins is regarded as the first female photographer.[4]

In a typical procedure, equal volumes of an 8.1% (w/v) solution of potassium ferricyanide and a 20% solution of ferric ammonium citrate are mixed. This mildly photosensitive solution is then applied to a receptive surface (such as paper or cloth) and allowed to dry in a dark place. Cyanotypes can be printed on any surface capable of soaking up the iron solution. Although watercolor paper is a preferred medium, cotton, wool and even gelatin sizing on nonporous surfaces have been used. Care should be taken to avoid alkaline-buffered papers which will cause degradation of the image over time.

A positive image can be produced by exposing it to a source of ultraviolet light (such as sunlight) with a negative. The UV light reduces the iron(III) to iron(II). This is followed by a complex reaction of the iron(II) complex with ferricyanide. The result is an insoluble, blue dye (ferric ferrocyanide) known as Prussian blue.

Upon exposure to ultraviolet light (such as that in sunlight), the iron in the exposed areas will reduce, turning the paper a steel-grey-blue color. The extent of color change is dependent on the amount of UV light, but acceptable results are usually obtained after 10-20 minute exposures on a bright, sunny day. The highlight values should appear overexposed as the water wash will reduce the final print values. Prints can be made with large format negatives and lithography film, or everyday objects can be used to make photograms.

After exposure, developing of the picture involves the yellow unreacted iron solution being rinsed off with running water. Although the blue color darkens upon drying, the effect can be accelerated by soaking the print in a 6% (v/v) solution of 3% (household) hydrogen peroxide. The water-soluble iron(III) salts are washed away, while the non-water-soluble Prussian blue remains in the paper. This is what gives the picture its typical blue color.

In a cyanotype a blue is usually the desired color, however there are a variety of effects that can be achieved. These fall into three categories: reducing, intensifying and toning.[5]

Reducing is the process of reducing the intensity of the blue. Sodium carbonate, ammonia, Clorox, TSP, borax, Dektol and other reagents can be used to do this. A good easily obtained reducer is Sunlight laundry detergent. When using a reducer it is important to pull the cyanotype out of the weak solution and put the cyanotype into a water bath to arrest the bleaching process.

Intensifying is the strengthening of the blue effect. These reagents can also be used to expedite the oxidation process the cyanotype undergoes. These reagents are Hydrogen Peroxide, Citric Acid, Lemon Juice, and Vinegar.[5]

Toning is the process used to change the color of the iron in the print cyanotype.[5] The colour change varies with the reagent used. There are a variety of elements that can be used, including tannic acid, oolong tea, wine, cat urine, and pyrogallic acid.[5]

In contrast to most historical and present-day processes, cyanotype prints do not react well to basic environments. As a result it is not advised to store or present the print in chemically buffered museum board, as this will cause the image to fade. Another unusual characteristic of the cyanotype is its regenerative behaviour: prints that have faded due to prolonged exposure to light can often be significantly restored to their original tone by simply temporarily storing them in a dark environment.

Cyanotypes on cloth are permanent but must be washed by hand with non-phosphate soap [6] so as to not turn the cyan to yellow.