The Skyline of Singapore as viewed at night

Night photography refers to photographs taken outdoors between dusk and dawn. Night photographers generally have a choice between using artificial light and using a long exposure, exposing the scene for seconds, minutes, and even hours in order to give the film or digital sensor enough time to capture a usable image. With the progress of high-speed films, higher-sensitivity digital image sensors, wide-aperture lenses, and the ever-greater power of urban lights, night photography is increasingly possible using available light.

In the early 1900s, a few notable photographers, Alfred Stieglitz and William Fraser, began working at night. The first photographers known to have produced large bodies of work at night were Brassai and Bill Brandt. In 1932, Brassai published Paris de Nuit, a book of black-and-white photographs of the streets of Paris at night. During World War II, British photographer Brandt took advantage of the black-out conditions to photograph the streets of London by moonlight.

By the 1990s, British-born photographer Michael Kenna had established himself as the most commercially successful night photographer. His black-and-white landscapes were most often set between dusk and dawn in locations that included San Francisco, Japan, France, and England. Some of his most memorable projects depict the Ford Motor Company's Rouge River plant, the Ratcliffe-on-Soar Power Station in the East Midlands in England, and many of the Nazi concentration camps scattered across Germany, France, Belgium, Poland and Austria.

During the beginning of the 21st century, the popularity of digital cameras made it much easier for beginning photographers to understand the complexities of photographing at night. Today, there are hundreds of websites dedicated to night photography. 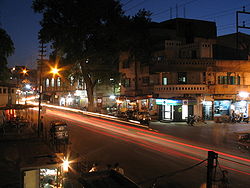 The following techniques and equipment are generally used in night photography.

The long exposure multiple flash technique is a method of night or low light photography which use a mobile flash unit to expose various parts of a building or interior using a long exposure.

This technique is often combined with using coloured gels in front of the flash unit to provide different colours in order to illuminate the subject in different ways. It is also common to flash the unit several times during the exposure while swapping the colours of the gels around to mix colours on the final photo. This requires some skill and a lot of imagination since it is not possible to see how the effects will turn out until the exposure is complete. By using this technique, the photographer can illuminate specific parts of the subject in different colours creating shadows in ways which would not normally be possible.

For more details on this topic, see Light painting.

When the correct equipment is used such as a tripod and shutter release cable, the photographer can use long exposures to photograph images of light. For example, when photographing a subject try switching the exposure to manual and selecting the bulb setting on the camera. Once this is achieved trip the shutter and photograph your subject moving a flashlight or any small light in various patterns. Experiment with this outcome to produce artistic results. Multiple attempts may be needed to produce a desired result.