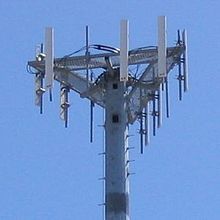 Top of a cellular radio tower

A cellular network is a radio network distributed over land areas called cells, each served by at least one fixed-location transceiver known as a cell site or base station. When joined together these cells provide radio coverage over a wide geographic area. This enables a large number of portable transceivers (e.g., mobile phones, pagers, etc.) to communicate with each other and with fixed transceivers and telephones anywhere in the network, via base stations, even if some of the transceivers are moving through more than one cell during transmission.

Cellular networks offer a number of advantages over alternative solutions:

An example of a simple non-telephone cellular system is an old taxi driver's radio system where the taxi company has several transmitters based around a city that can communicate directly with each taxi. 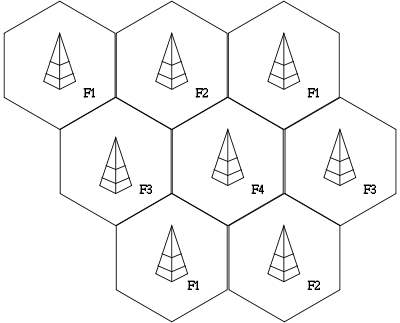 In a cellular radio system, a land area to be supplied with radio service is divided into regular shaped cells, which can be hexagonal, square, circular or some other irregular shapes, although hexagonal cells are conventional. Each of these cells is assigned multiple frequencies (f1 - f6) which have corresponding radio base stations. The group of frequencies can be reused in other cells, provided that the same frequencies are not reused in adjacent neighboring cells as that would cause co-channel interference.

The increased capacity in a cellular network, compared with a network with a single transmitter, comes from the fact that the same radio frequency can be reused in a different area for a completely different transmission. If there is a single plain transmitter, only one transmission can be used on any given frequency. Unfortunately, there is inevitably some level of interference from the signal from the other cells which use the same frequency. This means that, in a standard FDMA system, there must be at least a one cell gap between cells which reuse the same frequency.

In the simple case of the taxi company, each radio had a manually operated channel selector knob to tune to different frequencies. As the drivers moved around, they would change from channel to channel. The drivers knew which frequency covered approximately what area. When they did not receive a signal from the transmitter, they would try other channels until they found one that worked. The taxi drivers would only speak one at a time, when invited by the base station operator (in a sense TDMA).

The principle of CDMA is more complex, but achieves the same result; the distributed transceivers can select one cell and listen to it.

The key characteristic of a cellular network is the ability to re-use frequencies to increase both coverage and capacity. As described above, adjacent cells must use different frequencies, however there is no problem with two cells sufficiently far apart operating on the same frequency. The elements that determine frequency reuse are the reuse distance and the reuse factor.

The reuse distance, D is calculated as

where R is the cell radius and N is the number of cells per cluster. Cells may vary in radius in the ranges (1 km to 30 km). The boundaries of the cells can also overlap between adjacent cells and large cells can be divided into smaller cells [1]

In case of N sector antennas on the same base station site, each with different direction, the base station site can serve N different sectors. N is typically 3. A reuse pattern of N/K denotes a further division in frequency among N sector antennas per site. Some current and historical reuse patterns are 3/7 (North American AMPS), 6/4 (Motorola NAMPS), and 3/4 (GSM).

Code division multiple access-based systems use a wider frequency band to achieve the same rate of transmission as FDMA, but this is compensated for by the ability to use a frequency reuse factor of 1, for example using a reuse pattern of 1/1. In other words, adjacent base station sites use the same frequencies, and the different base stations and users are separated by codes rather than frequencies. While N is shown as 1 in this example, that does not mean the CDMA cell has only one sector, but rather that the entire cell bandwidth is also available to each sector individually.

Depending on the size of the city, a taxi system may not have any frequency-reuse in its own city, but certainly in other nearby cities, the same frequency can be used. In a big city, on the other hand, frequency-reuse could certainly be in use.

Recently also orthogonal frequency-division multiple access based systems such as LTE are being deployed with a frequency reuse of 1. Since such systems do not spread the signal across the frequency band, inter-cell radio resource management is important to coordinates resource allocation between different cell sites and to limit the inter-cell interference. There are various means of Inter-cell Interference Coordination (ICIC) already defined in the standard.[2] Coordinated scheduling, multi-site MIMO or multi-site beam forming are other examples for inter-cell radio resource management that might be standardized in the future.

Although the original 2-way-radio cell towers were at the centers of the cells and were omni-directional, a cellular map can be redrawn with the cellular telephone towers located at the corners of the hexagons where three cells converge.[3] Each tower has three sets of directional antennas aimed in three different directions with 120 degrees for each cell (totaling 360 degrees) and receiving/transmitting into three different cells at different frequencies. This provides a minimum of three channels (from three towers) for each cell. The numbers in the illustration are channel numbers, which repeat every 3 cells. Large cells can be subdivided into smaller cells for high volume areas.[4]

Practically every cellular system has some kind of broadcast mechanism. This can be used directly for distributing information to multiple mobiles, commonly, for example in mobile telephony systems, the most important use of broadcast information is to set up channels for one to one communication between the mobile transceiver and the base station. This is called paging.

The details of the process of paging vary somewhat from network to network, but normally we know a limited number of cells where the phone is located (this group of cells is called a Location Area in the GSM or UMTS system, or Routing Area if a data packet session is involved). Paging takes place by sending the broadcast message to all of those cells. Paging messages can be used for information transfer. This happens in pagers, in CDMA systems for sending SMS messages, and in the UMTS system where it allows for low downlink latency in packet-based connections.

Movement from cell to cell and handover

In a primitive taxi system, when the taxi moved away from a first tower and closer to a second tower, the taxi driver manually switched from one frequency to another as needed. If a communication was interrupted due to a loss of a signal, the taxi driver asked the base station operator to repeat the message on a different frequency.

In a cellular system, as the distributed mobile transceivers move from cell to cell during an ongoing continuous communication, switching from one cell frequency to a different cell frequency is done electronically without interruption and without a base station operator or manual switching. This is called the handover or handoff. Typically, a new channel is automatically selected for the mobile unit on the new base station which will serve it. The mobile unit then automatically switches from the current channel to the new channel and communication continues.

The exact details of the mobile system's move from one base station to the other varies considerably from system to system (see the example below for how a mobile phone network manages handover).

Example of a cellular network: the mobile phone network 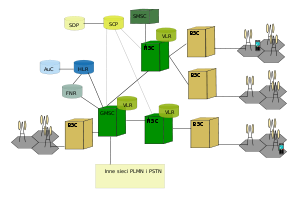 The most common example of a cellular network is a mobile phone (cell phone) network. A mobile phone is a portable telephone which receives or makes calls through a cell site (base station), or transmitting tower. Radio waves are used to transfer signals to and from the cell phone.

Modern mobile phone networks use cells because radio frequencies are a limited, shared resource. Cell-sites and handsets change frequency under computer control and use low power transmitters so that a limited number of radio frequencies can be simultaneously used by many callers with less interference.

A cellular network is used by the mobile phone operator to achieve both coverage and capacity for their subscribers. Large geographic areas are split into smaller cells to avoid line-of-sight signal loss and to support a large number of active phones in that area. All of the cell sites are connected to telephone exchanges (or switches) , which in turn connect to the public telephone network.

In cities, each cell site may have a range of up to approximately ½ mile, while in rural areas, the range could be as much as 5 miles. It is possible that in clear open areas, a user may receive signals from a cell site 25 miles away.

Since almost all mobile phones use cellular technology, including GSM, CDMA, and AMPS (analog), the term "cell phone" is in some regions, notably the US, used interchangeably with "mobile phone". However, satellite phones are mobile phones that do not communicate directly with a ground-based cellular tower, but may do so indirectly by way of a satellite.

A simple view of the cellular mobile-radio network consists of the following:

This network is the foundation of the GSM system network. There are many functions that are performed by this network in order to make sure customers get the desired service including mobility management, registration, call set up, and handover.

Any phone connects to the network via an RBS (Radio Base Station) at a corner of the corresponding cell which in turn connects to the Mobile switching center (MSC). The MSC provides a connection to the public switched telephone network (PSTN). The link from a phone to the RBS is called an uplink while the other way is termed downlink.

With CDMA, multiple CDMA handsets share a specific radio channel. The signals are separated by using a pseudonoise code (PN code) specific to each phone. As the user moves from one cell to another, the handset sets up radio links with multiple cell sites (or sectors of the same site) simultaneously. This is known as "soft handoff" because, unlike with traditional cellular technology, there is no one defined point where the phone switches to the new cell.

In IS-95 inter-frequency handovers and older analog systems such as NMT it will typically be impossible to test the target channel directly while communicating. In this case other techniques have to be used such as pilot beacons in IS-95. This means that there is almost always a brief break in the communication while searching for the new channel followed by the risk of an unexpected return to the old channel.

If there is no ongoing communication or the communication can be interrupted, it is possible for the mobile unit to spontaneously move from one cell to another and then notify the base station with the strongest signal.

The effect of frequency on cell coverage means that different frequencies serve better for different uses. Low frequencies, such as 450 MHz NMT, serve very well for countryside coverage. GSM 900 (900 MHz) is a suitable solution for light urban coverage. GSM 1800 (1.8 GHz) starts to be limited by structural walls. UMTS, at 2.1 GHz is quite similar in coverage to GSM 1800.

One can see examples of cell coverage by studying some of the coverage maps provided by real operators on their web sites. In certain cases they may mark the site of the transmitter, in others it can be calculated by working out the point of strongest coverage.

Following table shows the dependency of frequency on coverage area of one cell of a CDMA2000 network:[6]