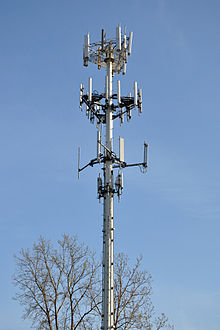 A short-mast cell site on top of a mountain in Wyoming, USA 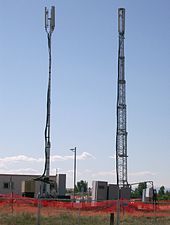 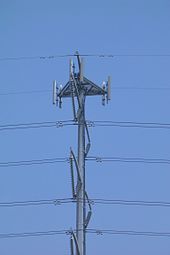 An antenna array on top of an electricity pylon 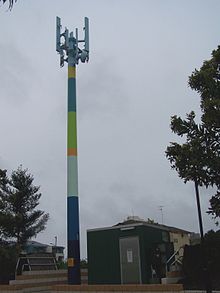 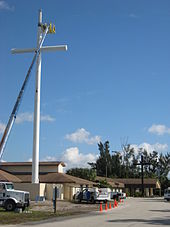 This 100 feet tall cross at Epiphany Lutheran Church, in Lake Worth, Florida, conceals equipment for T-Mobile.

A cell site is a term used to describe a site where antennas and electronic communications equipment are placed, usually on a radio mast, tower or other high place, to create a cell in a cellular network. The elevated structure typically supports antennas, and one or more sets of transmitter/receivers transceivers, digital signal processors, control electronics, a GPS receiver for timing (for CDMA2000/IS-95 or GSM systems), primary and backup electrical power sources, and sheltering.[1]

A cell site is sometimes called a "cell tower", even if the cell site antennas are mounted on a building rather than a tower. In GSM networks, the technically correct term is Base Transceiver Station (BTS), and colloquial British English synonyms are "mobile phone mast" or "base station". The term "base station site" might better reflect the increasing co-location of multiple mobile operators, and therefore multiple base stations, at a single site. Depending on an operator's technology, even a site hosting just a single mobile operator may house multiple base stations, each to serve a different air interface technology (CDMA2000 or GSM, for example).

Some cities require that cell sites be inconspicuous, for example blended with the surrounding area. Preserved treescapes can often hide cell towers inside an artificial tree or preserved tree. These installations are generally referred to as concealed cell sites or stealth cell sites.

The working range of a cell site - the range within which mobile devices can connect to it reliably - is not a fixed figure. It will depend on a number of factors, including

Generally, in areas where there are enough cell sites to cover a wide area, the range of each one will be set to:

In practice, cell sites are grouped in areas of high population density, with the most potential users. Cell phone traffic through a single cell mast is limited by the mast's capacity; there is a finite number of calls or data traffic that a mast can handle at once. This limitation is another factor affecting the spacing of cell mast sites. In suburban areas, masts are commonly spaced 1–2 miles (2-3 km) apart and in dense urban areas, masts may be as close as ¼-½ mile (400-800 m) apart. Cell masts always reserve part of their available bandwidth for emergency calls.

The maximum range of a mast (where it is not limited by interference with other masts nearby) depends on the same circumstances. Some technologies, such as GSM, normally have a fixed maximum range of 35 kilometres (22 mi), which is imposed by technical limitations. CDMA and IDEN have no built-in limit, but the limiting factor is the ability of a low-powered personal cell phone to transmit back to the mast. As a rough guide, based on a tall mast and flat terrain, it is possible to get between 50 to 70 km (30–45 miles). When the terrain is hilly, the maximum distance can vary from as little as 5 kilometres (3.1 mi) to 8 kilometres (5.0 mi) due to encroachment of intermediate objects into the wide center fresnel zone of the signal.[3] Depending on terrain and other circumstances, a GSM Tower can replace between 2 and 50 miles (80 km) of cabling for fixed wireless networks.[4]

The concept of "maximum" range is misleading, however, in a cellular network. Cellular networks are designed to support many conversations with a limited number of radio channels (slices of radio frequency spectrum necessary to make one conversation) that are licensed to an operator of a cellular service. To overcome this limitation, it is necessary to repeat and reuse the same channels at different locations. Just as a car radio changes from one local station to a completely different local station with the same frequency when you travel to another city, the same radio channel gets reused on a cell mast only a few miles away. To do this, the signal of a cell mast is intentionally kept at low power and many cases tilted downward to limit its area. This allows it to cover an area small enough not to have to support more conversations than the available channels can carry. Due to the sectorized arrangement of antennas on a tower, it is possible to vary the strength and angle of each sector depending on the coverage of other towers in view of the sector.

A cellphone may not work at times, because it is too far from a mast, or because the phone is in a location where cell phone signals are attenuated by thick building walls, hills or other structures. The signals do not need a clear line of sight but greater radio interference will degrade or eliminate reception. When many people try to use the cell mast at the same time, e.g. during a traffic jam or a sports event, then there will be a signal on the phone display but it is blocked from starting a new connection. The other limiting factor for cell phones is the ability of the cell phone to send a signal from its low powered battery to the mast. Some cellphones perform better than others under low power or low battery, typically due to the ability to send a good signal from the phone to the mast.

The base station controller (a central computer that specializes in making phone connections) and the intelligence of the cellphone keeps track of and allows the phone to switch from one mast to the next during conversation. As the user moves towards a mast it picks the strongest signal and releases the mast from which the signal has become weaker; that channel on that mast becomes available to another user.

Cellular geolocation is less precise than by GPS, but it is available to devices that do not have GPS receivers and where the GPS is not available. The precision of this system varies widely. Precision is highest where advanced forward link methods are possible (where a device is within range of at least three cell sites and where the carrier has implemented timing system use) and lowest where only a single cell site can be reached, in which case the location is only known to be within the coverage of that site. Another method using angle of arrival (AoA), possible when in range of at least two cell sites, produces intermediate precision. In the United States, for emergency calling service using location data (locally called "Enhanced 911"), it was required that at least 95% of cellular phones in use on 31 December 2005 support such service. Many carriers missed this deadline and were fined by the Federal Communications Commission.[5]

"For example, measurement data obtained from various sources have consistently indicated that "worst-case" ground-level power densities near typical cellular towers are on the order of 1 µW/cm2 or less (usually significantly less)."[citation needed] 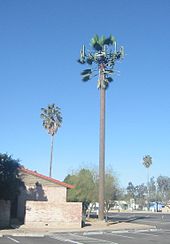 Colored to blend in with host building in Sopot, Poland

Although cell antennas are normally attached to permanent structures, carriers also maintain fleets of vehicles, called cells-on-wheels (COWs), that serve as temporary cell sites. A generator may be included for use where network electrical power isn't available, and the system may have a wireless backhaul link allowing use where a wired link is not available.

COWs are also used at permanent cell sites—as temporary replacements for damaged equipment, during planned outages, and to augment capacity such as during conventions.

Some cell sites can work off grid (that is without electrical power from the grid). Fuel cell backup power systems are added to critical cell sites to provide emergency power. More sites use internal-combustion-engine-driven generator sets.[6][7] In places distant from power lines, base stations are generally powered by generators. This solution, in addition to being a source of pollution (atmospheric, acoustic, etc.) is often used in areas protected by environment and landscape conservation and adds operating expense. Renewable energy can be applied for reliability and energy autonomy. 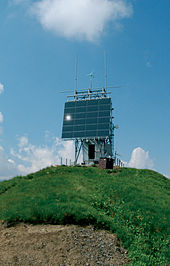 This solution in addition to being ecologically correct, is based on innovative technical solutions that render it economically competitive in respect to traditional power systems.

There is often local opposition to new masts for reasons of safety and appearance. The latter is sometimes tackled by disguising the mast as something else, such as a flag pole, street lamp, or a tree (i.e. palm trees, pine trees, cypress..) or rooftop structures or urban features such as chimneys or panels.

These concealed cell sites can distinguish themselves by foliage shape and bark type. The foliage of all these antennas is composed of leaves made of plastic material accurately designed, taking into consideration quantity, shape and array suitable to completely conceal the antennas and all accessory parts in a natural manner. The materials used guarantee absolute radio-electric transparency and resistance to UVA rays. Nicknames include "monopalm" for a monopole disguised as a palm tree or "Pseudpinus telephoneyensis" for a mast disguised as a pine tree.[8] In monopoles, the directional antennas are sometimes hidden in a plastic housing near the top of the pole so that the crossbars can be eliminated.

Rooftop structures such as concealment chimneys or panels, 6 to 12 meters high, may conceal one or more mobile telephone operators on the same station. Roofmask panels can be fixed to existing rooftop structures, restyling them quickly and cheaply.

Mobile telephone base stations are becoming a contemporary symbol, connected and intertwining with material and immaterial networks. Telestyles are architecturally blended cell towers, the result of cooperation with designers and architects. 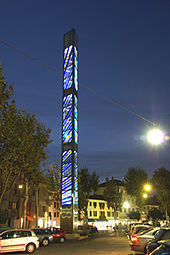