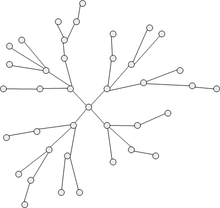 A telecommunications network is a collection of terminals, links and nodes which connect together to enable telecommunication between users of the terminals. Networks may use circuit switching or message switching. Each terminal in the network must have a unique address so messages or connections can be routed to the correct recipients. The collection of addresses in the network is called the address space.

The links connect the nodes together and are themselves built upon an underlying transmission network which physically pushes the message across the link.

Examples of telecommunications networks are:

Messages are generated by a sending terminal, then pass through the network of links and nodes until they arrive at the destination terminal. It is the job of the intermediate nodes to handle the messages and route them down the correct link toward their final destination.

The messages consist of control (or signaling) and bearer parts which can be sent together or separately. The bearer part is the actual content that the user wishes to transmit (e.g. some encoded speech, or an email) whereas the control part instructs the nodes where and possibly how the message should be routed through the network. A large number of protocols have been developed over the years to specify how each different type of telecommunication network should handle the control and bearer messages to achieve this efficiently.

Early networks were built without computers, but late in the 20th century their switching centers were computerized or the networks replaced with computer networks.

In general, every telecommunications network conceptually consists of three parts, or planes (so called because they can be thought of as being, and often are, separate overlay networks):

The data network is used extensively throughout the world to connect individuals and organizations. Data networks can be connected together to allow users seamless access to resources that are hosted outside of the particular provider they are connected to. The Internet is the best example of many data networks from different organizations all operating under a single address space.

Terminals attached to TCP/IP networks are addressed using IP addresses. There are different types of IP address, but the most common is IP Version 4. Each unique address consists of 4 integers between 0 and 255, usually separated by dots when written down, e.g. 82.131.34.56.

TCP/IP are the fundamental protocols that provide the control and routing of messages across the data network. There are many different network structures that TCP/IP can be used across to efficiently route messages, for example:

There are three features that differentiate MANs from LANs or WANs: