In the early 2000s, Kyrgyzstan used international investment support to restructure its telecommunications system, which had 7.7 telephone lines per 100 inhabitants in 2002 and 1,100,000 cellular phones in use in 2007. As part of the upgrading process, the government has attempted to sell a majority interest in the state-owned telecommunications company, Kyrgyztelecom, to foreign bidders. Companies from Russia, Sweden, and Turkey have been possible buyers. However, in 2005 an estimated 100,000 applicants were waiting for telephone line installation.[1] 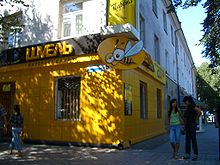 One of many internet cafes in Bishkek

Variable upload/download speeds through xDSL are available through state telephone company Kyrgyz Telecom (up to 8 Mbit/s downlink) and private ISPs (up to 1 Mbit/s downlink). There is typically a monthly cap on the amount of data transferred, with separate caps depending on whether the data stays within Kyrgyzstan or travels beyond the border. Broadband internet access with unlimited international traffic is rarely offered by ISPs to the market at significantly higher price. This is probably due to the lack of country's telecommunications bandwidth capacity.

ISPs provide internet access through satellite backbone communication lines linked to Russia, Germany, Ukraine, and Kazakhstan. There is a major telecommunications project under construction - The Trans-Asia-Europe Fiber Optic Line, connecting Shanghai, China and Frankfurt, Germany, with the capacity of 622 Mbit/s, where Kyrgyzstan has completed its part. Completion of this project might affect broadband internet prices in Kyrgyzstan.