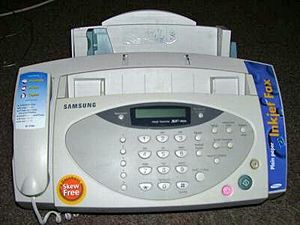 Fax (short for facsimile), sometimes called telecopying, is the telephonic transmission of scanned printed material (both text and images), normally to a telephone number connected to a printer or other output device. The original document is scanned with a fax machine, which processes the contents (text or images) as a single fixed graphic image, converting it into a bitmap, the information is then transmitted as electrical signals through the telephone system. The receiving fax machine reconverts the coded image, printing a paper copy.[1] Before digital technology became widespread, for many decades, the scanned data was transmitted as analog.

Although businesses usually maintain some kind of fax capability, the technology has faced increasing competition from Internet-based alternatives. Fax machines still retain some advantages, particularly in the transmission of sensitive material which, if sent over the Internet unencrypted, may be vulnerable to interception, without the need for telephone tapping. In some countries, because electronic signatures on contracts are not recognized by law while faxed contracts with copies of signatures are, fax machines enjoy continuing support in business.[citation needed]

In many corporate environments, standalone fax machines have been replaced by "fax servers" and other computerized systems capable of receiving and storing incoming faxes electronically, and then routing them to users on paper or via an email (which may be secured). Such systems have the advantage of reducing costs by eliminating unnecessary printouts and reducing the number of inbound analog phone lines needed by an office.

Scottish inventor Alexander Bain worked on chemical mechanical fax type devices and in 1846 was able to reproduce graphic signs in laboratory experiments. He received the first fax patent in 1843. Frederick Bakewell made several improvements on Bain's design and demonstrated telefax machine, the Pantelegraph, was invented by the Italian physicist Giovanni Caselli. He introduced the first commercial telefax service between Paris and Lyon in 1865, some 11 years before the invention of telephones.[2][3]

In 1881, English inventor Shelford Bidwell constructed the scanning phototelegraph that was the first telefax machine to scan any two-dimensional original, not requiring manual plotting or drawing. Around 1900, German physicist Arthur Korn invented the Bildtelegraph, widespread in continental Europe especially, since a widely noticed transmission of a wanted-person photograph from Paris to London in 1908, used until the wider distribution of the radiofax. Its main competitors were the Bélinograf by Édouard Belin first, then since the 1930s the Hellschreiber, invented in 1929 by German inventor Rudolf Hell, a pioneer in mechanical image scanning and transmission.

As a designer for the Radio Corporation of America (RCA), in 1924, Richard H. Ranger invented the wireless photoradiogram, or transoceanic radio facsimile, the forerunner of today’s "Fax" machines. A photograph of President Calvin Coolidge sent from New York to London on November 29, 1924 became the first photo picture reproduced by transoceanic radio facsimile. Commercial use of Ranger’s product began two years later. Radio fax is still in common use today for transmitting weather charts and information to ships at sea. Also in 1924, Herbert E. Ives of AT&T transmitted and reconstructed the first color facsimile, using color separations. Around 1952 or so, Finch Facsimile, a highly-developed machine, was described in detail in a book; it apparently was never manufactured in quantity.

In the 1960s, the United States Army transmitted the first photograph via satellite facsimile ("fax") to Puerto Rico from the Deal Test Site using the Courier satellite.

Prior to the introduction of the ubiquitous fax machine, one of the first being the Exxon Qwip[4] in the mid-1970s, facsimile machines worked by optical scanning of a document or drawing spinning on a drum. The reflected light, varying in intensity according to the light and dark areas of the document, was focused on a photocell so that the current in a circuit varied with the amount of light. This current was used to control a tone generator (a modulator), the current determining the frequency of the tone produced. This audio tone was then transmitted using an acoustic coupler (a speaker, in this case) attached to the microphone of a common telephone handset. At the receiving end, a handset’s speaker was attached to an acoustic coupler (a microphone), and a demodulator converted the varying tone into a variable current that controlled the mechanical movement of a pen or pencil to reproduce the image on a blank sheet of paper on an identical drum rotating at the same rate. A pair of these expensive and bulky machines could only be afforded by companies with a serious need to communicate drawings, design sketches or signed documents between distant locations, such as an office and factory.[5] Western Union began a "Faxcimile Telegraphy" service in 1935. Their first coast-to-coast message contained images of Mickey Mouse.

Group 1 and 2 faxes are sent in the same manner as a frame of analogue television, with each scanned line transmitted as a continuous analogue signal. Horizontal resolution depended upon the quality of the scanner, transmission line, and the printer. Analogue fax machines are obsolete and no longer manufactured. ITU-T Recommendations T.2 and T.3 were withdrawn as obsolete in July 1996. 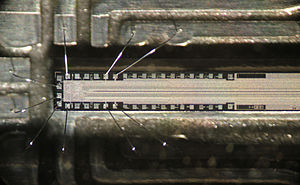 The CCD chip in a fax machine. Only about one quarter of the length is shown. The thin line in the middle consists of photosensitive pixels. The read-out circuit is at left.

Fax Over IP (FOIP) can transmit and receive pre-digitized documents at near realtime speeds using ITU-T recommendation T.38 to send digitised images over an IP network using JPEG compression. T.38 is designed to work with VoIP services and often supported by analog telephone adapters used by legacy fax machines that need to connect through a VoIP service. Scanned documents are limited to the amount of time the user takes to load the document in a scanner and for the device to process a digital file. The resolution can vary from as little as 150 DPI to 9600 DPI or more. This type of faxing is not related to the e-mail to fax service that still uses fax modems at least one way.

Computer modems are often designated by a particular fax class, which indicates how much processing is offloaded from the computer's CPU to the fax modem.

Several different telephone line modulation techniques are used by fax machines. They are negotiated during the fax-modem handshake, and the fax devices will use the highest data rate that both fax devices support, usually a minimum of 14.4 kbit/s for Group 3 fax.

Note that 'Super Group 3' faxes use V.34bis modulation that allows a data rate of up to 33.6 kbit/s.

As well as specifying the resolution (and allowable physical size of the image being faxed), the ITU-T T.4 recommendation specifies two compression methods for decreasing the amount of data that needs to be transmitted between the fax machines to transfer the image. The two methods are:

Modified Huffman (MH) is a codebook-based run-length encoding scheme optimised to efficiently compress whitespace. As most faxes consist mostly of white space, this minimises the transmission time of most faxes. Each line scanned is compressed independently of its predecessor and successor.

Modified read (MR) encodes the first scanned line using MH. The next line is compared to the first, the differences determined, and then the differences are encoded and transmitted. This is effective as most lines differ little from their predecessor. This is not continued to the end of the fax transmission, but only for a limited number of lines until the process is reset and a new 'first line' encoded with MH is produced. This limited number of lines is to prevent errors propagating throughout the whole fax, as the standard does not provide for error-correction. MR is an optional facility, and some fax machines do not use MR in order to minimise the amount of computation required by the machine. The limited number of lines is two for 'Standard' resolution faxes, and four for 'Fine' resolution faxes.

The ITU-T T.6 recommendation adds a further compression type of Modified Modified READ (MMR), which simply allows for a greater number of lines to be coded by MR than in T.4. This is because T.6 makes the assumption that the transmission is over a circuit with a low number of line errors such as digital ISDN. In this case, there is no maximum number of lines for which the differences are encoded.

A proprietary compression scheme employed on Panasonic fax machines is Matsushita Whiteline Skip (MWS). It can be overlaid on the other compression schemes, but is operative only when two Panasonic machines are communicating with one another. This system detects the blank scanned areas between lines of text, and then compresses several blank scan lines into the data space of a single character.

Group 3 fax machines transfer one or a few printed or handwritten pages per minute in black-and-white (bitonal) at a resolution of 204×98 (normal) or 204×196 (fine) dots per square inch. The transfer rate is 14.4 kbit/s or higher for modems and some fax machines, but fax machines support speeds beginning with 2400 bit/s and typically operate at 9600 bit/s. The transferred image formats are called ITU-T (formerly CCITT) fax group 3 or 4.

The most basic fax mode transfers black and white colors only. The original page is scanned in a resolution of 1728 pixels/line and 1145 lines/page (for A4). The resulting raw data is compressed using a modified Huffman code optimized for written text, achieving average compression factors of around 20. Typically a page needs 10 s for transmission, instead of about 3 minutes for the same uncompressed raw data of 1728×1145 bits at a speed of 9600 bit/s. The compression method uses a Huffman codebook for run lengths of black and white runs in a single scanned line, and it can also use the fact that two adjacent scanlines are usually quite similar, saving bandwidth by encoding only the differences.

Fax classes denote the way fax programs interact with fax hardware. Available classes include Class 1, Class 2, Class 2.0 and 2.1, and Intel CAS. Many modems support at least class 1 and often either Class 2 or Class 2.0. Which is preferable to use depends on factors such as hardware, software, modem firmware, and expected use.

Fax machines from the 1970s to the 1990s often used direct thermal printers as their printing technology, but since the mid-1990s there has been a transition towards thermal transfer printers, inkjet printers and laser printers.

One of the advantages of inkjet printing is that inkjets can affordably print in color; therefore, many of the inkjet-based fax machines claim to have color fax capability. There is a standard called ITU-T30e for faxing in color; unfortunately, it is not widely supported, so many of the color fax machines can only fax in color to machines from the same manufacturer. 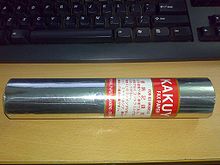 As a precaution, thermal fax paper is typically not accepted in archives or as documentary evidence in some courts of law unless photocopied. This is because the image-forming coating is eradicable and brittle, and it tends to come off after a long time in storage.[8]

One popular alternative is to subscribe to an internet fax service. Fax service providers allow users to send and receive faxes from their personal computers using an existing email account. No software, fax server or fax machine is needed. Faxes are received as attached TIFF or PDF files, or in proprietary formats that require the use of the service provider's software. Faxes can be sent or retrieved from anywhere at any time that a user can get internet access. Some services even offer secure faxing to comply with stringent HIPAA and Gramm–Leach–Bliley Act requirements to keep medical information and financial information private and secure. Utilizing a fax service provider does not require paper, a dedicated fax line, or consumables.

Another alternative to a physical fax machine is to make use of computer software which allows people to send and receive faxes using their own computers. See Fax server, Unified messaging and internet fax. A virtual (email) fax can be printed out and then signed and scanned back to computer before being emailed. Also the sender can attach a digital signature to the document file.