Neognaths (Neognathae) are birds within the subclass Neornithes of the class Aves. The Neognathae include virtually all living birds; their sister taxon Palaeognathae contains the tinamous and the flightless ratites.

There are nearly 10,000 species of neognaths. Since the late Cretaceous, from which the earliest fossils are known, they have undergone an adaptive radiation producing the diversity of form, function, and behavior that we see today. The Passeriformes (perching birds) are the largest order of land vertebrates, containing some 60% of living birds and being more than twice as speciose as rodents and about 5 times as speciose as Chiroptera (bats and flying foxes) which are the largest orders of mammals. On the other hand, there are some very small orders, usually birds of very unclear relationships like the puzzling Hoatzin.

The neognaths have fused metacarpals, an elongate third finger, and 13 or fewer vertebrae. They differ from the Palaeognathae in features like the structure of their jawbones. "Neognathae" means "new jaws", but ironically it seems that the supposedly "more ancient" paleognath jaws are among the few apomorphic (more derived) features of this group as compared to the neognaths. 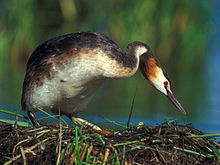 The Great Crested Grebe (Podiceps cristatus), among the closest living relatives of flamingos.

For long the Neognathae were ranked as a superorder and not subdivided any further; attempts to do so, for example in the Conspectus of Charles Lucien Bonaparte, were never accepted even by a significant majority of ornithologists. Indeed, until the 1980s there was little subdivision of the Aves in general, and even less of phylogenetic merit. Since then the availability of massive amounts of new data from fossils - especially Enantiornithes and other Mesozoic birds - as well as molecular (DNA and protein) sequences allowed scientists to refine the classification. With new groups of neognath orders being verified, the taxonomic rank of the group needed to shift. In fact, most researchers have by now employed the unranked taxa of phylogenetic nomenclature.[1] 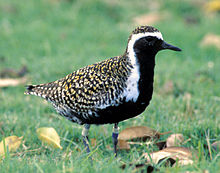 Black Kites (Milvus migrans) like other accipitrids have peculiar chromosomes. This has much confounded molecular phylogeny.

The Neognathae are universally accepted to subdivide into two lineages - the "fowl" clade Galloanseres and the Neoaves (sometimes called "higher neognaths"). The subdivisions of the latter are still not well resolved, but several monophyletic lineages have been proposed, such as the Mirandornithes, Cypselomorphae or Metaves and Coronaves. While groups such as the former two - uniting a few closely related orders - are robustly supported, this cannot be said for the Metaves-Coronaves division for which there is no material evidence at present while the Mesozoic record of Neognathae is at present utterly devoid of birds that would have to be present if these proposed clades were real.[2]

Taxonomic note:
The ranks used here are rarely employed in the literature. The ultimate reason is a limitation in the Wikipedia taxobox code, which does not allow for an arbitrary number of "unranked" taxa to be displayed. As the taxa used here have all been validly described and neither the ICZN nor any other authority regulates their employment, the present ranking is as valid as any other - perhaps even more - and given the technical limitations the only system that can currently be used within the scope of Wikipedia. More commonly found is the old placement as a superorder - but such systematic treatments need to be viewed with caution, as they often do not even incorporate the Galloanserae - or as unranked clade.

The orders are arranged in a sequence that attempts to follow the modern view on neognath phylogeny. It differs from the widely used Clements taxonomy as well as from the Sibley-Ahlquist taxonomy, combining those elements from each that more modern research agrees with while updating those that are refuted. The result is at least a much better representation of the true evolutionary relationships of neognath orders. Most of the changes affect those "higher landbirds" that are sometimes united as near passerines.[3]

Feduccia defined the clade Neognathia as birds are whose palatal mobility increased due to the following modifications (Feduccia 1980, 1996):