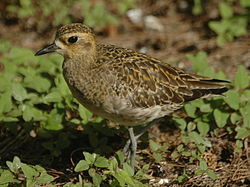 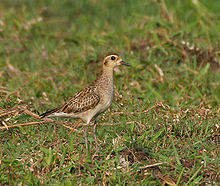 The Pacific Golden Plover (Pluvialis fulva) is a medium-sized plover.

The 23–26 cm long breeding adult is spotted gold and black on the crown, back and wings. Its face and neck are black with a white border and it has a black breast and a dark rump. The legs are black. In winter, the black is lost and the plover then has a yellowish face and breast, and white underparts.

The breeding habitat of Pacific Golden Plover is Arctic tundra from northernmost Asia into western Alaska. It nests on the ground in a dry open area.

It is migratory and winters in south Asia and Australasia. A few winter in California and Hawaii, USA. This wader is a very rare vagrant to western Europe.

This bird forages for food on tundra, fields, beaches and tidal flats, usually by sight. It eats insects and crustaceans and some berries.