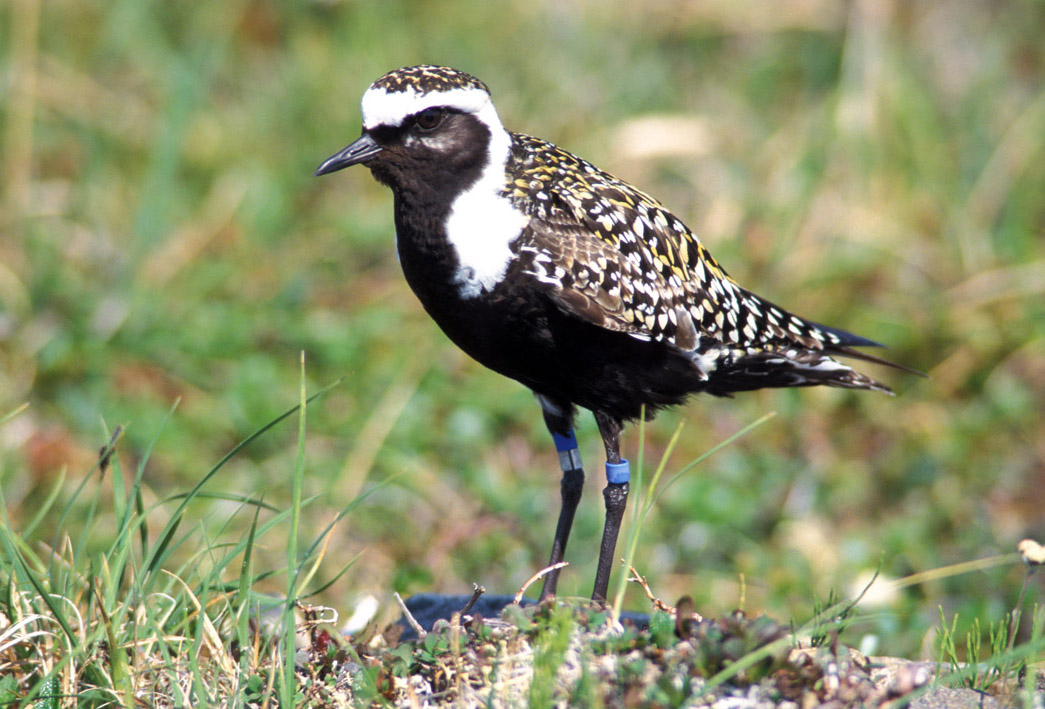 The American Golden Plover (" _la. Pluvialis dominica") is a medium-sized .Adults are spotted gold and black on the crown, back and wings. Their face and neck are black with a white border; they have a black breast and a dark rump. The legs are black.

It is similar to two other golden plovers, Eurasian and Pacific. The American Golden Plover is smaller, slimmer and relatively longer-legged than ("Pluvialis apricaria") which also has white axillary (armpit) feathers. It is more similar to ("Pluvialis fulva") with which it was once considered conspecific under the name "Lesser Golden Plover". [Reviewed in Sangster "et al." (2002).] The Pacific Golden Plover is slimmer than the American species, has a shorter primary projection, and longer legs, and is usually yellower on the back.

These birds forage for food on tundra, fields, beaches and tidal flats, usually by sight. They eat insects and crustaceans, also berries.

The breeding habitat of American Golden Plover is Arctic tundra from northern and . They nest on the ground in a dry open area. They are migratory and winter in northern . They follow an elliptical migration path; northbound birds pass through about January-April [Strewe & Navarro (2004), Herrera "et al." (2006)] and stage in great numbers in places like Illinois before their final push north. In fall, they take a more easterly route, flying mostly over the western and to the wintering grounds in . The bird has one of the longest known migratory routes of over 25000 miles, much of which it flies without stopping to eat or drink. It does this from body fat stores that it stocks up on prior to the flight. It is a regular vagrant to western .

A comparison of dates and migratory patterns leads to the conclusion that s and American Golden Plovers were the most likely shore birds to have attracted the attention of to nearby America in early October , after 65 days at sea out of sight of land.

Large numbers were shot in the late 1800s and the population has never fully recovered.