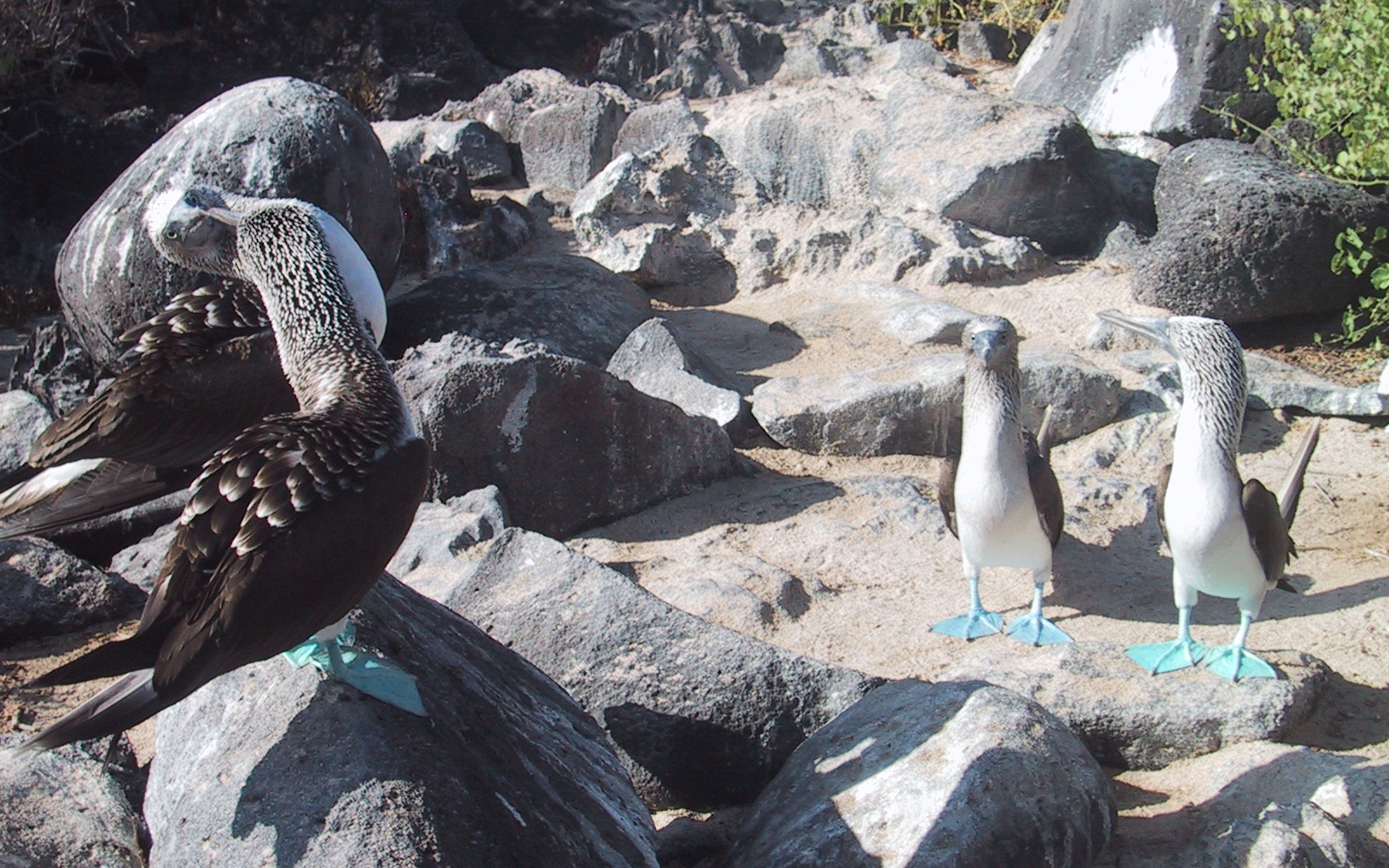 The Pelecaniformes are an order of medium-sized and large waterbirds found worldwide. They are distinguished from other s by the possession of feet with all four toes webbed (totipalmate). They all have a bare throat patch (gular patch). The s have evolved into dysfunctional slits and unlike other birds, they breathe through their mouths. There are some 50-60 living species, depending on which families are placed in this group.

They feed on fish, squid or similar marine life. Nesting is colonial, but individual birds are . The young are , hatching from the egg helpless and naked.

Sibley and Ahlquist's landmark studies (see ) led to them placing the families traditionally contained within the Pelecaniformes together with the s, s, ibises and spoonbills, s, s, s, es, s, and s together as a sub-group within a greatly expanded order , a radical move which by now has been all but rejected: their "Ciconiiformes" merely assembled all early advanced land- and seabirds for which their research technique delivered insufficient phylogenetic resolution.

Recent research strongly suggests that the similarities between the Pelecaniformes as traditionally defined are the result of rather than common descent, and that the group is [Mayr (2003)] . All families in the traditional or revised Pelecaniformes except the Phalacrocoracidae have only a few handfuls of species at most, but many were more numerous in the early . Fossil genera and species are discussed in the respective family or genus accounts; one little-known prehistoric pelecaniforms, however, cannot be classified accurately enough to assign them to a family. This is "Sula" ronzoni" from Early rocks at (), which was initially believed to be a sea-duck and possibly is an ancestral pelecaniform.

The "pelecaniform" lineages appear to have originated around the end of the . Monophyletic or not, they appear to belong to a close-knit group of "higher waterbirds" which also includes groups such as s and . It is interesting to note that there are quite a lot of fossil bones from around the which cannot be firmly placed with any of these orders and rather combine traits of several of them. This is of course only to be expected, if the theory that most if not all of these "higher waterbird" lineages originated around that time is correct. Of those apparently basal , the following show some similarities to the traditional Pelecaniformes:

The proposed - supposedly a family of Cretaceous Pelecaniformes - are neither nor does "Elopteryx" appear to be a modern bird [Mortimer (2004)] . "" from the Early Eocene of England (London Clay) may be a pelagornithid.

* : frigatebirds. A group of five closely related large birds with black and white plumage, very long wings, and parasitical hunting habits. Red throat patches are inflated in display.
* : pelicans. Very large birds with throat pouches in which they catch and store fish while hunting.
* : pseudotooth birds. A family of gigantic seabirds that looked similar to es, but had a large bill with tooth-like projections that enabled them to pick up slippery prey like fish or s more easily. Recently, it has been suggested that they are closer to the (waterfowl).Fact|date=November 2007
* : plotopterids or diving-"boobies". An extinct group of penguin-like seabirds. Possibly link penguins and (some?) pelecaniforms. Depending on how the remaining Pelecaniformes would be split up, the plotopterids might have to be placed in a order.

The following four families can be united as :
* : gannets and boobies. Medium to large species which hunt by diving from the air into the sea (plunge diving). Long wings and bills, often coloured feet.
* : cormorants and shags. Medium to large with hooked bills and usually black or similar dark plumage. Plumage is not fully waterproof.
* : darters. Another small closely related group of four species, with long bills, snake-like necks and the ability to swim with their body submerged. Plumage is not fully waterproof.
* : an extinct family which apparently is derived from the same ancestor as the darters, but is very badly known.

The following families are traditionally placed into the Pelecaniformes, but probably do not belong there:
* : tropicbirds. Medium-sized birds, adapted to a matrine lifestyle similar to frigatebirds. Adults have long central tail feathers, no gular patch and normal nostrils. Hatchlings are covered in down. Apparently closer to [Mayr (2003), Bourdon "et al." (2005)] and might form a separate order, together with the
* : a little-known prehistoric family closely allied to the tropicbirds.

The and the , which make up the families (Balaenicipitidae and Scopidae, respectively) usually placed with the traditional Ciconiiformes, may be very distinct pelecaniform lineages instead.