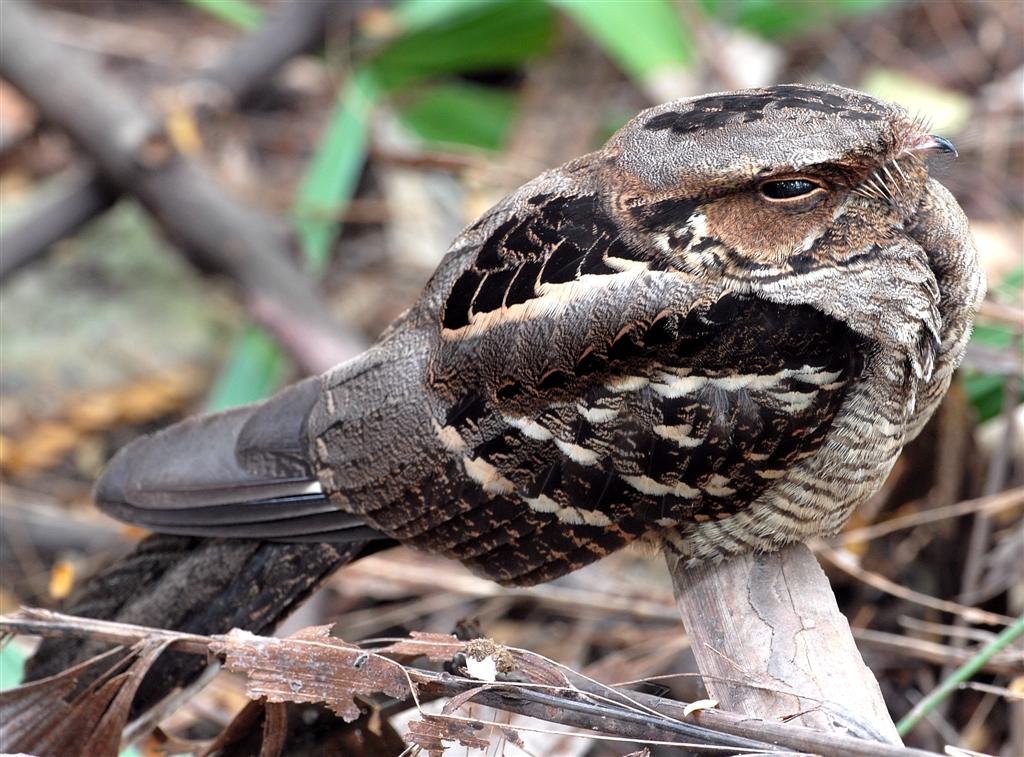 The Caprimulgiformes is an order of s that includes a number of s with global distribution (except ). They are generally insectivorous and nocturnal. The order gets its name from the Latin for "goat-sucker", an old name based on an erroneous view of the 's feeding habits.

The classification of the various birds that make up the order has long been controversial and difficult, particularly in the case of the nightjars. All things considered, the nightjar order would probably best be limited to potoos, nightjars, and eared-nightjars, all other lineages being elevated to order level, and the s being altogether distant:

Traditionally, they were regarded, on morphological grounds, as being midway between the s (Strigiformes) and the s. Like the owls, they are nocturnal hunters with a highly developed sense of sight, and like the swifts they are excellent flyers with small, weak legs. At one time or another, they have been allied with owls, swifts, s, s, s, s, s, s, s, s and .

While only the latter study recovered monophyly of the (see below) within Metaves, the former was based on only a single locus and could not resolve their relationships according to standard criteria of statistical confidence. No morphological have been found that uniquely unite Metaves (or Caprimulgiformes for that matter), but numerous unlinked nuclear genes independently support their monophyly either in majority or whole. Ericson "et al." (2006) concluded that if valid, the "Metaves" must originate quite some time before the , and they reconciled this with the fossil record.

While the relationships of cypselomorphs are a subject of ongoing debate, the of the individual lineages is better resolved. Much of the remaining uncertainty regards minor details.

Initial cytochrome "b" sequence analysis (Mariaux & Braun 1996) agreed with earlier morphological (Cracraft 1981) and (Sibley & Ahlquist 1990) studies insofar as that the oilbird and the frogmouths seemed rather distinct. The other lineages appeared to form a , but this is now known to have been caused by methodological limitiations.

The Aegothelidae (s) with about a dozen living species in one genus are apparently closer to the (Mayr 2002); these and the Caprimulgiformes are closely related, being grouped together as . The oilbird and the frogmouths seem quite distinct among the remaining Caprimulgiformes, but their exact placement cannot be resolved based on osteological data alone (Mary 2002).

Even the study of Ericson "et al." could not properly resolve the oilbird's and frogmouths' relationships beyond the fact that they are quite certainly well distinct. It robustly supported, however, the idea that the owlet-nightjars should be considered closer to Caprimulgiformes, unlike the methodologically weaker studies of Mariaux & Braun (1996) and Fain & Houde (2004).

Alternatively, Mayr's phylogenetic taxon Cypselomorphae might be placed at order rank and substitute the two present orders Caprimulgiformes and Apodiformes. Such a group would be fairly uninformative as regards its evolutionary history, as it has to include some very ic and some extremely derived lineages (such as hummingbirds) to achieve monophyly.

The record of caprimulgiform birds (in the loose sense) is rather scant. Nonetheless, it supports the emerging consensus phylogeny well. The genus "", probably from the (though this is somewhat uncertain) , seems to be a basal form that at times has been allied with the oilbird and the potoos, but cannot be assigned to either with certainty. In the consensus scenario, it would represent a record of the initial divergence of the three lineages.

This nicely agrees with fossils suggesting that the basal divergence of the owlet-nightjar and apodiform branch also occurred during that time. In addition, "", a or Early genus of north-central Europe, cannot be assigned to any one cypselomorph lineage with certainty but appears to be some ancestral form.

These birds strongly suggest that the two main extant lineages of cypselomorphs separated about 60-55 mya (-), and that some time around the - boundary, some 40 mya, the common ancestors of Nyctibiidae, Caprimulgidae and Eurostopodidae diverged from those of oilbird and frogmouths.