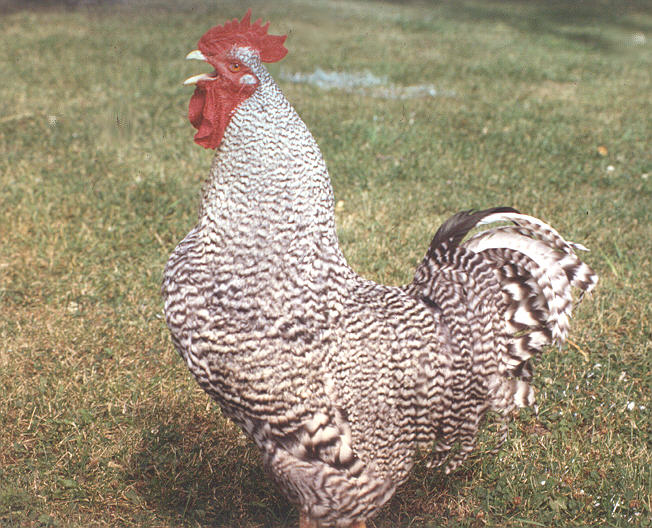 Most or all s collectively referred to as fowl belong to one of two orders, namely the gamefowl or landfowl () and the waterfowl (). Interestingly, studies of anatomical and molecular similarities suggest these two groups were close ary relatives; together, they form the fowl which is scientifically known as Galloanserae (initially termed Galloanseri) [Sibley "et al." (1988)] . This clade is also supported by morphological and data [Chubb (2004)] as well as presence/absence data [Kriegs "et al." (2007)] .

As opposed to "fowl", "", on the other hand, is a term for any kind of bird or bird captive-raised for meat or eggs; es for example are sometimes kept as poultry, but are neither gamefowl nor waterfowl. In colloquial speech, the term "fowl" is however often used near-synonymously with "poultry" or even "bird", and many languages do not distinguish between "poultry" and "fowl". Nonetheless, the fact that Galliformes and Anseriformes most likely form a group makes a distinction between "fowl" and "poultry" warranted.

While they are extremely diverse ly and consequently, in an adaptation to their different lifestyles, also morphologically and ly, there are still some features which unite water- and landfowl. Many of these, however, are ic for as a whole, and are also shared with s.
*Galloanserae are very prolific; they regularly produce clutches of more than 5 or even more than 10 eggs, which is a lot for such sizeable birds. For example and s rarely lay more than two eggs.
*While most living birds are , at least for a breeding season, many Galloanserae are notoriously or . To s, this is particularly well-known in s, where the males literally band together occasionally to "" unwilling females. The general public is probably most familiar with the polygynous habits of , where usually one or two s are kept with a whole flock of females.
*ization is extremely frequent in Galloanserae, and , not usually known to produce viable hybrids in birds, can be brought to interbreed with comparative ease. have successfully produced hybrids with domestic fowl and , to which are not particularly closely related as go. This is an important factor complicating sequence-based research on their relationships. The s of , for example, are apparently mostly derived from some males which arrived from , settled down, and mated with ancestors [Kulikova "et al." (2005)] . "See also" .
*Galloanserae young are remarkably . Anseriform young are able to swim and dive a few hours after hatching, and the hatchlings of mound-builders are fully feathered and even able to fly for prolonged distances as soon as they emerge from the nest mound.

Fowl were the first lineages to evolve. From the limited s that have to date been recovered, the conclusion that they were already widespread - indeed the predominant group of modern birds - by end of the is generally accepted nowadays. Fossils such as "" indicate that essentially modern waterfowl - albeit belonging to a nowadays lineage - were contemporaries of the (non-avian) s. As opposed to the morphologically fairly conservative Galliformes, the Anseriformes have adapted to filter-feeding and are characterized by a large number of ies related to this lifestyle. The extremely advanced feeding systems of the Anseriformes, together with similarities of the early anseriform "" to s, had formerly prompted some scientists to ally Anseriformes with instead [Benson (1999), Feduccia (1999)] ("see also" "") [EvoWiki (2008)] . However, as strong support for the Galloanserae has emerged in subsequent studies, the fowl clade continues to be accepted as a genuine evolutionary lineage by the vast majority of scientists.

Apart from the living members, the are probably a member of the Galloanserae.