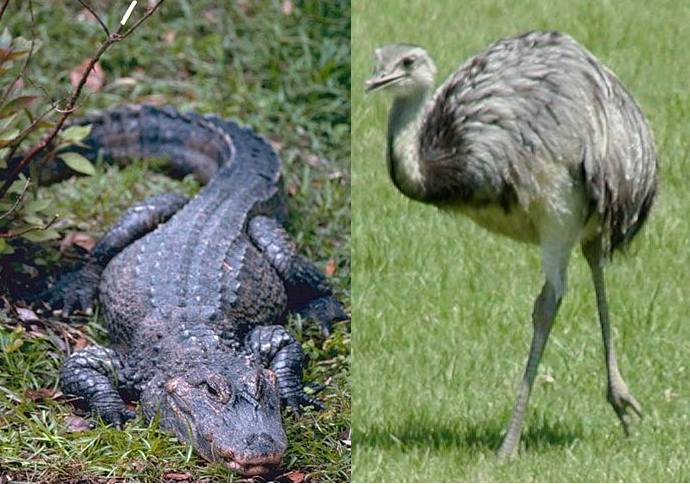 Archosaurs (Greek for 'ruling lizards') are a group of s represented by and ns. This group also includes extinct non-avian s, s and relatives of crocodiles.

The simplest and most widely-agreed synapomorphies of archosaurs are:
*Teeth set in sockets, which makes them less likely to be torn loose during feeding. This feature is responsible for the name "s" ("socket teeth"), which paleontologists used to apply to all or most archosaurs. Some archosaurs, such as birds, are secondarily toothless.
*e (openings in the skull in front of the eyes but behind the nostrils), which reduced the weight of the skull, a useful feature since most early archosaurs had long, heavy skulls, rather like those of modern s. The preorbital fenestrae (sometimes called anteorbital fenestrae) are often larger than the orbits (eye sockets).
*e (small openings in the jaw bones), which may have reduced the weight of the jaw slightly.
*A (ridge for attaching muscles) on the . This seemingly insignificant detail may have made the evolution of dinosaurs possible (all early dinosaurs and many later ones were bipeds), and may also be connected with the ability of the archosaurs or their immediate ancestors to survive the catastrophic .

Archosaur takeover in the Triassic

The a (informally known as "mammal-like reptiles") were the dominant land vertebrates throughout the , but most perished in the . "" (a herbivorous synapsid) was the only large land animal to survive the event, becoming the most populous land animal on the planet for a time. [" [http://shopping.discovery.com/product-59634.shtml Before the Dinosaurs] ", Discovery Channel]

But archosaurs quickly became the dominant land vertebrates in the early . The two most commonly-suggested explanations Fact|date=February 2007 for this are:
*Archosaurs made quicker progress than mammal-like reptiles towards erect limbs, and this gave them greater stamina by avoiding . This is unconvincing since Archosaurs became dominant while they still had sprawling or semi-erect limbs, similar to those of "" and other mammal-like reptiles.
*The early Triassic was predominantly arid, because most of the 's land was concentrated in the . Archosaurs were probably better at conserving water than early synapsids because:

It has also been suggested that the Triassic was low on oxygen and archosaurs had a more advanced respiratory system. [" [http://books.nap.edu/openbook.php?record_id=11630&page=159 Oxygen and evolution] "]

Since the 1970s scientists have classified archosaurs mainly on the basis of their ankles. [ [http://www.palaeos.com/Vertebrates/Units/270Archosauromorpha/270.500.html Archosauromorpha: Archosauria - Palaeos] ] The earliest archosaurs had "primitive mesotarsal" ankles: the astragalus and calcaneum were fixed to the and fibula by sutures and the joint bent about the contact between these bones and the foot.

The appeared early in the . In their ankles the astragalus was joined to the tibia by a suture and the joint rotated round a peg on the astragalus which fitted into a socket in the calcaneum. Early "crurotarsans" still walked with sprawling limbs, but some later "crurotarsans" developed fully erect limbs (most notably the ). And modern crocodilians are "crurotarsans" which can walk with their limbs sprawling or erect depending on how much of a hurry they are in.

"" and the had "reversed crurotarsal" ankles, with a peg on the calcaneum and socket on the astragalus.

The earliest fossils of ("bird necks") appear in the age of the late , but it is hard to see how they could have evolved from the "crurotarsans" — possibly they actually evolved much earlier, or perhaps they evolved from the last of the "primitive mesotarsal" archosaurs. Ornithodires' "advanced mesotarsal" ankle had a very large astragalus and very small calcaneum, and could only move in one plane, like a simple hinge. This arrangement was only suitable for animals with erect limbs, but provided more stability when the animals were running. The ornithodires differed from other archosaurs in other ways: they were lightly-built and usually small, their necks were long and had an S-shaped curve, their skulls were much more lightly built, and many ornithodires were completely bipedal. The archosaurian fourth trochanter on the femur may have made it easier for ornithodires to become bipeds, because it provided more leverage for the thigh muscles. In the late Triassic the ornithodires diversified to produce s and s. [ [http://www.palaeos.com/Vertebrates/Units/270Archosauromorpha/270.500.html Archosauromorpha: overview Palaeos] ]

Like the early s, early archosaurs had a sprawling gait because their hip sockets faced sideways, and the knobs at the tops of their s were in line with the femur.

In the early to mid , some archosaur groups developed hip joints which allowed (or required) a more erect gait. This gave them greater stamina, because it avoided , i.e., they could run and breathe easily at the same time. There were two main types of joint which allowed erect legs:
*The hip sockets faced sideways but the knobs on the femurs were at right angles to the rest of the femur, which therefore pointed downwards. Dinosaurs evolved from archosaurs with this hip arrangement.
*The hip sockets faced downwards and the knobs on the femurs were in line with the femur. This "pillar-erect" arrangement appears to have evolved more than once independently in various archosaur lineages, for example it was common in and also appeared in some s.

Crocodilians, pterosaurs, dinosaurs, and s survived the about 195 million years ago, but other archosaurs became extinct.

Non-avian dinosaurs and pterosaurs perished in the , but crocodilians, champsosaurs, and birds (last surviving dinosaur group) survived. Birds are descendants of archosaurs, and are therefore archosaurs themselves under .

Champsosaurs became extinct in the Early .

Crocodilians (which include all modern s, s, and s) and birds flourish today, and it is generally agreed that birds have the most species of all terrestrial vertebrates.

Most were large predators, but members of various lines diversified into other niches. s were herbivores and some developed spectacular armor. A few crocodilians were herbivores, e.g., "Simosuchus", "Phyllodontosuchus". The large crocodilian "" may have been a . Sauropodomorphs and n dinosaurs were herbivores with diverse adaptations for feeding .

Archosaurs are mainly portrayed as land animals, but:
*The crocodilians dominated the rivers and swamps and even invaded the seas (e.g., the teleosaurs, and ). The Metriorhynchidae were rather dolphin-like, with paddle-like forelimbs, a tail fluke and smooth, unarmoured skins.
*Two clades of ornithodirans, the and the birds, dominated the air becoming adapated to a volant lifestyle.

The metabolism of archosaurs is still a controversial topic. They certainly evolved from cold-blooded ancestors, and the surviving non-dinosaurian archosaurs, crocodilians, are cold-blooded. But crocodilians have some features which are normally associated with a warm-blooded metabolism because they improve the animal's oxygen supply:
*4-chambered hearts. Mammals and birds have 4-chambered hearts. Non-crocodilian reptiles have 3-chambered hearts, which are less efficient because they allow oxygenated and de-oxygenated blood to mix and therefore send some de-oxygenated blood out to the body instead of to the lungs. Modern crocodilians' hearts are 4-chambered, but are smaller relative to body size and run at lower pressure than those of modern mammals and birds. They also have a bypass which makes them functionally 3-chambered when under water, conserving oxygen.
*a , which allows the animal to eat and breathe at the same time.
*a hepatic piston mechanism for pumping the lungs. This is different from the lung-pumping mechanisms of mammals and birds but similar to what some researchers claim to have found in some dinosaurs. [cite journal|author=Ruben, J., "et al" | title=The metabolic status of some Late Cretaceous dinosaurs | journal=Science | issue=273 | pages=120–147 | date=1996 |volume=273|doi=10.1126/science.273.5279.1204] [cite journal|author=Ruben, J., "et al" | title=Lung structure and ventilation in theropod dinosaurs and early birds | journal=Science | issue=278 | pages=1267–1247 | date=1997 |volume=278|doi=10.1126/science.278.5341.1267]

So, why did favour the development of these features, which are very important for active warm-blooded creatures but of little apparent use to cold-blooded aquatic ambush predators which spend the vast majority of their time floating in water or lying on river banks?

If the original crocodilians were warm-blooded and other archosaurs were also warm-blooded, this would help to resolve some evolutionary puzzles:
*The earliest crocodilians, e.g., "", were slim, leggy terrestrial predators whose build suggests a fairly active lifestyle, which requires a fairly fast metabolism. And some other "crurotarsan" archosaurs appear to have had erect limbs, while those of ns are very poorly adapted for any other posture. Erect limbs are advantageous for active animals because they avoid , but disavantageous for more sluggish animals because they increase the energy costs of standing up and lying down.
*If early archosaurs were completely cold-blooded and (as seems most likely) dinosaurs were at least fairly warm-blooded, dinosaurs would have had to evolve warm-blooded metabolisms in less than half the time it took for mammal-like reptiles to do the same.